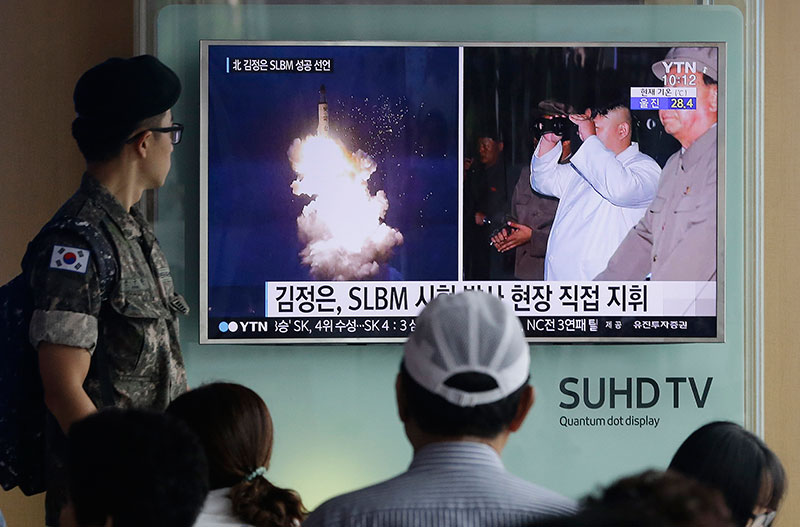 A press statement approved by all 15 members deplored the fact that the North's ballistic missile activities are contributing to its development of nuclear weapon delivery systems and increasing tensions.

The council expressed "serious concern" that North Korea carried out the launches after six ballistic missile firings between April and June "in flagrant disregard" of its repeated statements to halt such launches as well as nuclear tests which violate council resolutions.

It urged all U.N. member states "to redouble their efforts" to implement sanctions against Pyongyang, including the toughest measures in two decades imposed by the council in March. Those sanctions reflected growing anger at Pyongyang's nuclear test in January and a subsequent rocket launch.

North Korea has repeatedly flouted Security Council resolutions demanding an end to its nuclear and ballistic missile activities and has continued to launch missiles, escalating tensions on the Korean peninsula and in the region.

The latest submarine launch of a ballistic missile on Wednesday came days after the U.S. and South Korea began military exercises, prompting North Korean threats of retaliation for the military drills, which it views as a rehearsal for invasion by the U.S. and other adversaries.

South Korean officials said the submarine-launched missile flew about 500 kilometers (310 miles), the longest distance achieved by the North for such a weapon. That means all of South Korea, and possibly parts of Japan, are within its striking distance.

China, a neighbor and ally of North Korea, had either blocked attempts by the United States and other council members to condemn the three previous attacks when they happened, or insisted on unacceptable language.

The council's agreement on Friday's statement, just two days after the latest North Korean test, reflects growing anger and concern at the North's continuing defiance of the council, including by China.

In Pyongyang, North Korean Foreign Ministry official Jon Min Dok told Associated Press Television News in an interview that the U.S.-led discussions at the U.N. were a "terrible provocation" and that the country is developing nuclear weapons because of "outrageous nuclear intimidation" by the United States.

Jon spoke just before the Security Council concluded the discussions with a statement.

He said that the latest submarine-launched missile didn't cause any harm to the security of neighboring countries. He said it showed North Korea's "great power and inexhaustible strength in the face of the trials of history and the challenges of our enemies."

"The best way for the U.S. to escape a deadly strike from us is by refraining from insulting our dignity and threatening our security, by exercising prudence and self-control," Jon said.

North Korea already has a variety of land-based missiles that can hit South Korea and Japan, including U.S. military bases in those countries. Its development of reliable submarine-launched missiles would add a weapon that is harder to detect before launch.

Wednesday's launch was the latest in a series of missile, rocket and other weapon tests this year by North Korea, which is openly pushing to acquire a wider range of nuclear weapons, including those capable of striking targets as far away as mainland United States.

In Friday's statement, the Security Council "reiterated the importance of maintaining peace and stability on the Korean peninsula and in northeast Asia at large."

Members also expressed "their commitment to a peaceful, diplomatic and political solution to the situation" and stressed "the importance of working to reduce tensions in the Korean peninsula and beyond."

The United States could use its Ground-based Midcourse Defence (GMD) system – designed to intercept incoming warheads in space –... Read More...