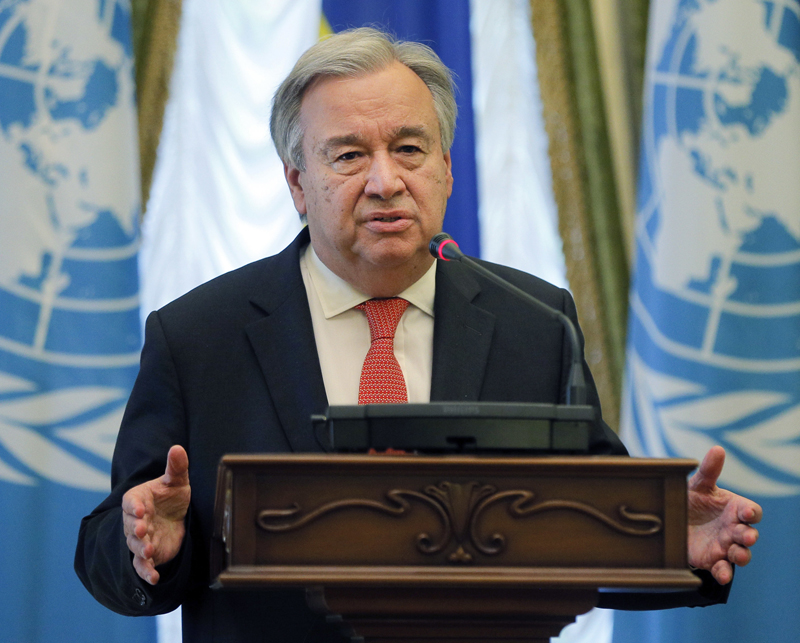 UNITED NATIONS, August 19: Secretary-General Antonio Guterres had a message for people everywhere ahead of World Humanitarian Day on Saturday: "Civilians in conflict are not a target."

He told a U.N. event Friday to mark the day that protecting civilians trapped in conflict and humanitarian and health care workers trying to help them is required under international law, "yet in war zones all over the world, parties to conflict are flouting their obligations."

"As war is waged in towns and cities, we see children pulled from the rubble of their bombed schools, families buried in the remains of their homes, markets, places of worship and vital infrastructure reduced to rubble," Guterres said. "Women and girls, as well as men and boys, are subjected to horrific sexual violence with no recourse to treatment or to justice."

The U.N. chief urged people "to stand together in solidarity with civilians in conflict," stressing that "every civilian has a right to safety and protection."

The General Assembly designated Aug. 19 as World Humanitarian Day in 2008 to honor U.N. envoy for Iraq Sergio Vieira de Mello, who was a former U.N. humanitarian chief, and 21 colleagues who were killed in the bombing of U.N. headquarters in Baghdad on Aug. 19, 2003. Its aim is to spotlight humanitarian work and the people who risk their lives to provide it.

U.N. humanitarian chief Stephen O'Brien told several hundred U.N. staff at the event that since 2008 "many thousands of aid workers have been killed in direct or indirect attacks."

Last year alone, he said, 288 aid workers were targeted in 158 attacks that left 101 dead, 98 wounded, and 89 kidnapped. The attacks included a mass rape of female aid workers in South Sudan, and "the clear majority" of those killed and injured were national staff of humanitarian organizations, he said.

O'Brien said conflict, violence and persecution have forced 65 million people from their homes, and when humanitarian staff are targeted these people suffer.

He urged people to sign an online petition demanding that global leaders exert their diplomatic, political and economic influence on warring parties and those supporting them to ensure that international humanitarian law is respected and civilians caught in conflict are protected.

More than 10,000 people have already signed the #NotATarget petition atwww.worldhumanitarianday.org , O'Brien said, and "it would be wonderful to see it run from hundreds of thousands to millions, even to billions."