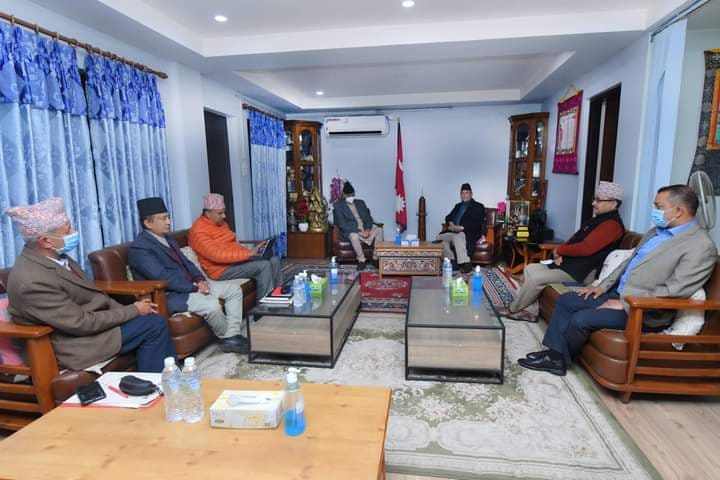 KATHMANDU, Feb 25: The main opposition party, CPN-UML, has said that it will make its position on the MCC grant agreement clear if the government creates an environment for the UML to take part in the parliamentary process.

Talking to media persons after the meeting between top leaders of ruling Nepali Congress(NC) and the CPN-UML on Friday, UML's Deputy General Secretary Pradeep Kumar Gyawali said the UML will make a matured decision on MCC grant agreement if the government fulfilled UML's demands. The UML has been staging protests in parliament against Speaker Agni Sapkota for failing to take action against 14 lawmakers sacked by the party.

"Our Chairman requested Prime Minister [Deuba] to create an environment for the UML to take part in the parliamentary process. These include removing Speaker Agni Sapkota and taking action against 14 lawmakers sacked by the party," said Gyawali. "There was no concrete answer from the NC on this. But the NC leaders seemed serious towards our demands as the trust deficit has increased with the coalition partners," he further said.

Gyawali, however, said that there has been an agreement between NC and the UML that a greater understanding between the two forces which fought for the cause of democracy is a must to bail the country out of current political stalemate. "How anarchic and unstable characters are polluting the country was adequately discussed in the meeting. Since the issue of MCC grant agreement also involves Nepal's external relations, the UML cannot remain 'indecisive' on the issue," he further said.

Although the UML has not protested against the grant agreement, the party has not made its position clear after it was ousted from power. The NC has always been supportive to ratify the MCC grant agreement from parliament.

Prime Minister Deuba along with influential leaders of his party had reached the residence of UML Chairman Oli in Balkot. NC leader Gyanendra Bahadur Karki, who is also Minister for Information and Communications Technology, said Prime Minister Deuba requested the UML leadership to forge a common consensus among parties on the MCC issue. Although there was no concrete agreement, Karki said their discussion has moved in the positive direction.

BHADRAPUR, June 29: CPN-UML mayoral candidate Jiban Kumar Shrestha is taking the lead in the race for the mayor of... Read More...