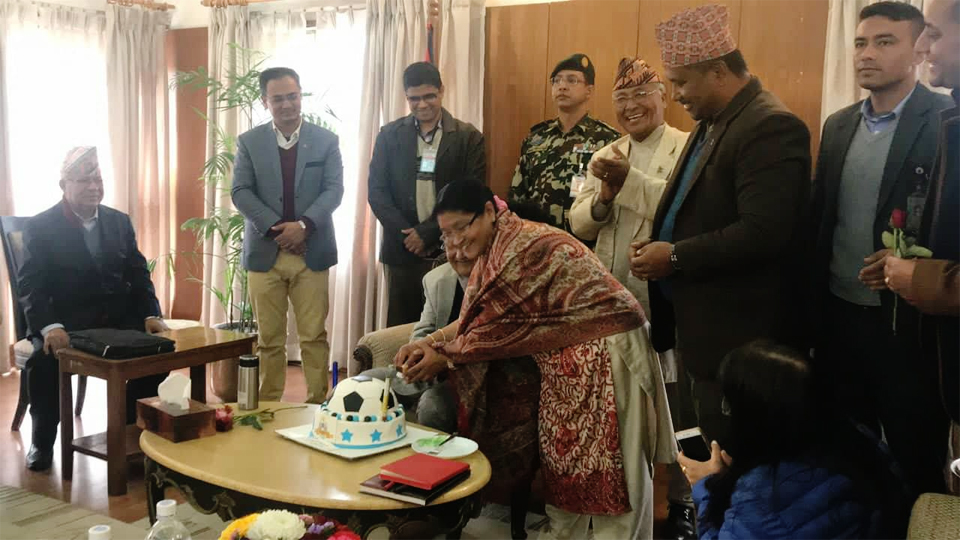 KATHMANDU, Feb 23: With many leaders vying for ministerial portfolio, the CPN-UML’s standing committee meeting has concluded that the party chair will nominate ministers. Hence, KP Sharma Oli, the country’s prime minister has now been shouldered with the responsibility to finalize names from his party.

PM shouldered the responsibility to finalize names of ministers from the party.

CPN-UML standing committee meeting decided to halt all of its assemblies of the party wings.

Party members celebrate the birthday of PM and Party chair and Oli cuts the football cake.

Today’s meeting, held at the Prime Minister’s official residence, Baluwatar handed the responsibility of appointing ministers after discussing with CPN (Maoist Center) and Madesh based parties.

“While the government has majority, to garner 2/3rd support, we are inviting Madesh based parties in the government,” Yogesh Bhattarai, Party secretary said. He added that Oli would also discuss possibilities with its counterpart, CPN Maoist Center and decide if it is to invite Federal Socialist Forum Nepal and Rastriya Janta Party, Nepal to form the government.

In light of the ongoing party merger, today’s CPN-UML standing committee meeting decided to halt all of its assemblies.

Before the meeting Party's members celebrate the birthday of PM Oli. PM Oli has cuts a football cake on his birthday.