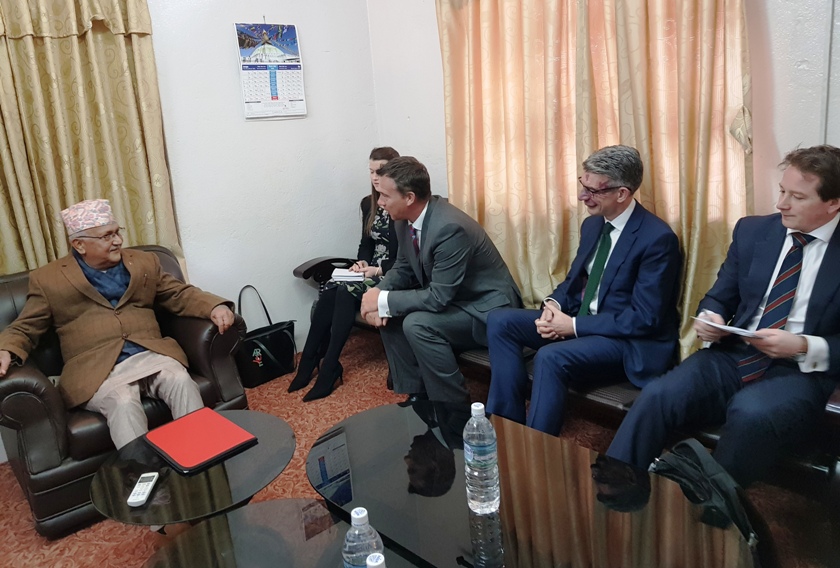 The UML Chair said so during a meeting with the UK State Minister when the latter paid a courtesy call on him at the UML parliamentary party office in Singha Durbar today.

In reply, the Minister of State Lancaster congratulated Oli on the leftist alliance for becoming victorious in the recently held elections in Nepal and that the UK was positive on increasing investment in Nepal, UML leader Dr Rajan Bhattarai, who was present during the meeting, said.

The UK Minister of State for Armed Forces apprised Chair Oli on the progress made by the joint technical team constituted to study on the retirement benefits of the ex-Gurkha soldiers who served in the British Army. He also assured that there will not be any discrimination against the Gurkha soldiers as Britain and Nepal had established diplomatic relations 202 years ago.

The UK official also urged Nepal to take initiative regarding addressing the problem seen in providing accreditation in Nepal to British students studying chartered accountancy. He also inquired regarding the formation of new government and the left unity process. RSS

Police refuse to register complaint against Rabi Lamichhane over passport case
20 hours ago
Ruling alliance on the verge of collapse over new president, home ministry row
6 hours ago
UML in favor of reinstating Lamichhane as Home Minister, Maoist Center opposed to the idea
22 hours ago

Fugitive arrested from his house in Jumla
36 minutes ago