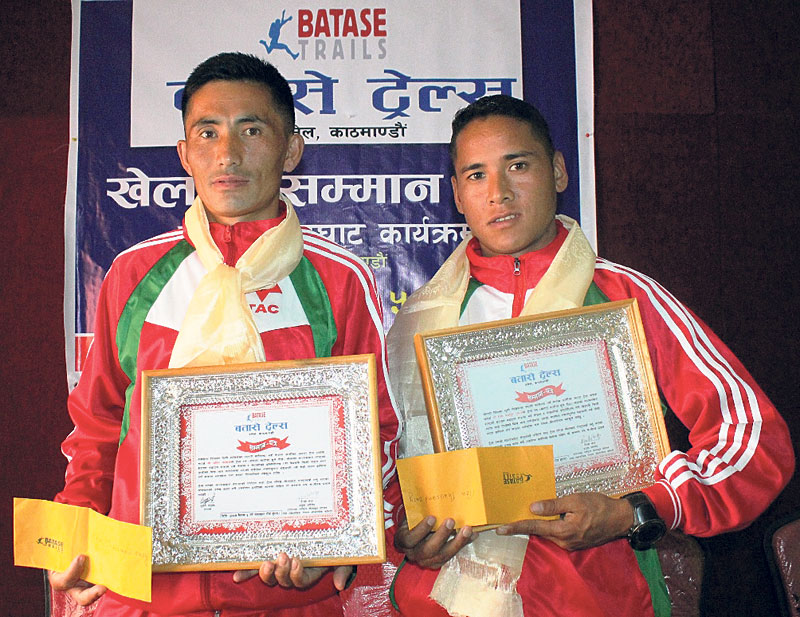 The Tribhuvan Army Club duo had secured second and third positions in the marathon clocking 4 hours 18 minutes and 4 hours 31 minutes respectively in the event held in North Pole on April 9.

National Sports Council (NSC)’s Vice-president Lama Tendi Sherpa felicitated the players and handed them cash reward of Rs 10,000 each alongside letter of appreciation.

After being felicitated, Bhim said that the government needs to invest in ultra race as it has been successful to fetch international medals for the country. “I have been in this sport since 14 years and I have tasted numerous international success. But unfortunately, the government hasn’t seriously recognized this sports and players,” said the 34-year old athlete Bhim.

“If the government formulates proper plan and invests on this sport, Nepali ultra runners can get even more success,” added Bhim.

Another felicitated athlete Samir said that taking part in such prestigious event was a big deal for overall sport fratenity of the country and winning medal was another feather in our hat.

Meanwhile, Batase Trails is organizing the third edition of the Batase Ultra Race on April 25 in Sindhupalchowk. The event will feature 12 km, 37 km and 85 km races according to the event coordinator Mingma Gyalmo Lama. The 12 km race will see the participation of school level students while other two categories will feature a total of 150 professional runners from Nepal and abroad.

“Our major objective for organizing this event is to attract tourists with the help of sports, especially ultra races. We had attracted a good number of participants from abroad in the past editions so we are hopeful we will attract similar number of participants this time as well,” said event coordinator Lama.