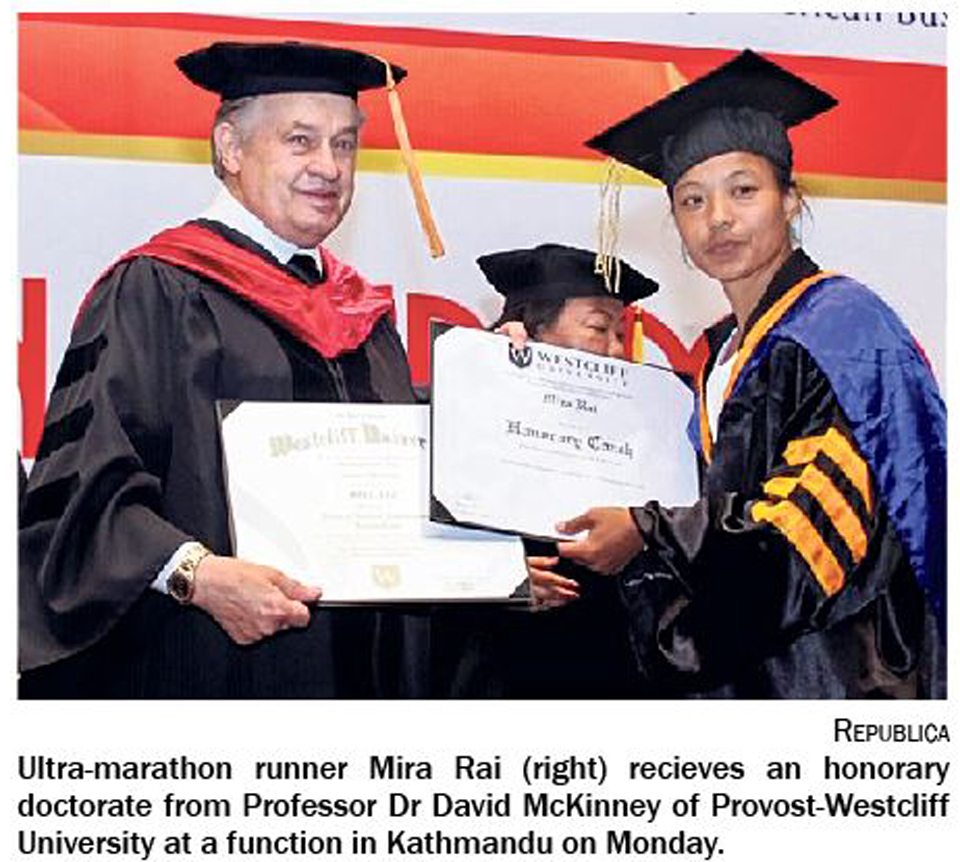 KATHMANDU, Sept 9: Ultra-marathon runner Mira Rai was conferred an honorary doctorate degree in Business Administration amidst a special function held in the capital on Monday.

The US-based Westcliff University conferred the honorary doctorate degree on Rai during the fourth Graduation Ceremony organized by Presidential Business School (PBS) for its BBA and MBA graduates.

The university said the doctorate degree was awarded to Rai in recognition of her hard struggle to transform herself from a Maoist combatant to a world- renowned marathon runner. She had opted to be an athlete after she was disqualified for integration in the Nepal Army by the UNMIN's verification team.

Rai is one of the most famous athletes and trail runners of Nepal. Born in a remote village in Bhojpur district in eastern Nepal, Rai could make bigger achievements despite limited opportunities available to her.

Rai's journey as a trail runner began with her participation in the Himalayan Outdoor Ultra-run in 2014, when she won the first international Sellaronda Trail Race in Italy.

Rai has participated in about 20 national and international trail race competitions till date. Setting a new record in Mont. Blanc 80km race in 2015, Rai was named the 2017 National Geographic People's Choice Adventurer of the Year.

Speaking on the occasion, Rai suggested to all those graduated students to never give up their dreams and always focus on what they think they are truly good at. “When I was a little child, my friends used to run across the hills. That is where I developed my trail running skills,” she said adding that this enabled her to develop her career as an athlete.

Outstanding achievers of both BBA and MBA of different intakes were also honored on the occasion. While congratulating the newly-graduated students, PBS Executive Director Laxman KC provided various tips and suggestions to succeed in their professional lives.

KATHMANDU, June 17: Nine women from various walks of life contributing to the society have been honoured. ... Read More...

POKHARA, April 2: The Kirti Smriti Journalism Award 2073 has been conferred on journalist Yuvraj Ghimire for is noteworthy contribution... Read More...

NEPALGUNJ, March 29: The Lions Club of Nepalgunj has feted journalist Jaya Narayan Shah in recognition for his contribution in... Read More...