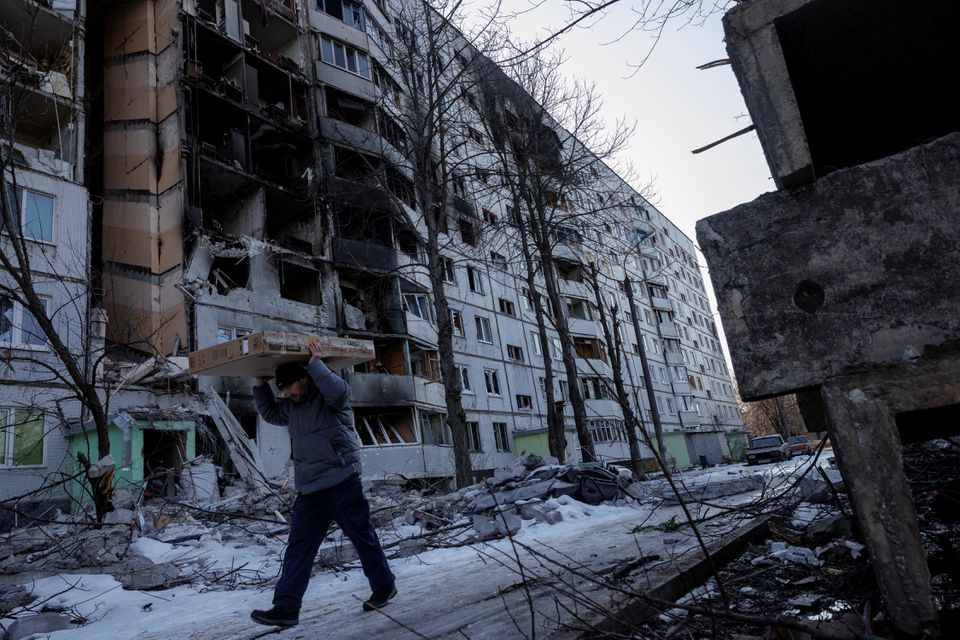 A man carries belonging out of a house that was hit by bombing in a northern district of Kharkiv as Russia's attack on Ukraine continues, Ukraine, March 24, 2022.

LVIV, Ukraine, March 25: Ukrainian troops are recapturing towns east of the capital Kyiv and Russian forces who had been trying to sieze the city are falling back on their overextended supply lines, Britain said on Friday.

U.S. President Joe Biden meanwhile was due to visit Poland for a first-hand look at the refugee crisis in which nearly a quarter of Ukraine's 44 million people have been uprooted and more than 3.6 million have fled to neighbouring states since the Russian invasion on Feb. 24.

A month into their assault, Russian troops have failed to capture a major Ukrainian city. An offensive that Western countries believe was aimed at swiftly toppling President Volodymyr Zelenskiy's government has been halted at the gates of Kyiv.

Battlelines there have been frozen for weeks with Russian columns threatening Kyiv from the northwest and the east. But in an intelligence update on Friday, Britain described a Ukrainian counter-offensive that had pushed the Russians far back.

"Ukrainian counter-attacks, and Russian forces falling back on overextended supply lines, has allowed Ukraine to reoccupy towns and defensive positions up to 35 km east of Kyiv," the update said.

It said Ukrainian forces were also likely to try to push the Russians back on the other main axis threatening Kyiv from the northwest, while in the south Russia could still be planning to attack the port of Odesa after abandoning efforts to take Mykolaiv.

The Ukrainian military said its troops were repelling Russian forces trying to fight their way into Kyiv. Troops were also still holding on to the city of Chernihiv, northeast of Kyiv, hindering a Russian advance in the direction of the capital.

Moscow calls its actions in Ukraine a "special military operation" to disarm its neighbour. Kyiv and its Western allies call it an unprovoked war of agression and say Russia's true aim was to overthrow the government of what President Vladimir Putin regards as an illegitimate state.

Unable to capture Ukrainian cities, Russia has resorted to pounding them with artillery and air strikes. The eastern port of Mariupol has been under siege since the war's early days. Tens of thousands of people are still believed to be trapped inside with no access to food, medicine, power or heat.

In a part of the city now captured by the Russians, one woman waiting in line to receive food supplies told Reuters her diabetic husband had slipped into a coma and died. He was buried in a flowerbed. read more

"We are planning on leaving but it's very difficult at the moment," the woman, who gave her name as Alexandra, said. "I can't leave my husband in a flowerbed ... And then we have nowhere to go."

After attending an emergency summit of NATO and the G7, Biden will visit Poland, which has taken in more than half of Ukraine's refugees.

The West has ruled out intervening on the ground or answering Ukraine's plea for a no-fly zone, but has supported Kyiv with hundreds of anti-tank and anti-aircraft weapons that have blasted Russian armoured columns and prevented Moscow from taking control of the air.

A senior U.S. administration official said Washington and its allies were also working on providing anti-ship weapons to protect Ukraine's coast. Ukrainian forces claimed on Thursday to have blown up a Russian landing ship in a Russian-occupied port.

U.S. officials told Reuters that Russia is suffering failure rates as high as 60% for some of its precision-guided missiles. read more

With stocks of precision-guided munitions running low, Russian forces were more likely to rely on unguided bombs and artillery, Under Secretary of Defense for Policy Colin Kahl said.

Most of Nepalis in Ukraine rescued

LONDON, March 11: Most of the Nepali nationals displaced in Ukraine as a result of the Russia-Ukraine conflict have been... Read More...

KATHMANDU, March 2: As many as 302 Nepalis affected by the Russia-Ukraine conflict have reached safe destinations. Addressing a meeting... Read More...