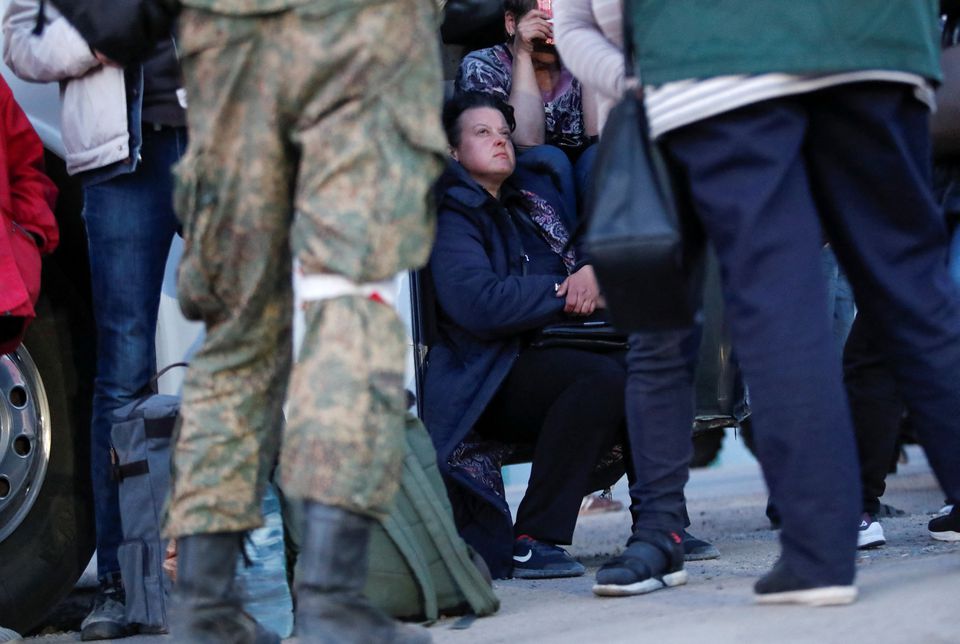 KYIV, May 8: All women, children and elderly civilians have been evacuated from the Azovstal steel mill in Mariupol, Ukrainian officials said on Saturday, after a week-long effort rescued hundreds of people during an ongoing Russian assault at the plant.

"This part of the Mariupol humanitarian operation is over," Deputy Prime Minister Iryna Vereshchuk wrote on the Telegram messaging app.

The Soviet-era steel mill, the last holdout in Mariupol for Ukrainian forces, has become a symbol of resistance to the Russian effort to capture swathes of eastern and southern Ukraine in the 10-week-old war.

Under heavy bombardment, fighters and civilians have been trapped for weeks in deep bunkers and tunnels criss-crossing the site, with little food, water or medicine.

Weeks of Russian bombardment have left Mariupol in ruins. The steel mill has been largely destroyed. During pauses in fighting, evacuations of civilians began last weekend, brokered by the United Nations and the International Committee of the Red Cross.

Ukrainian President Volodymyr Zelenskiy said in a late night address that more than 300 civilians had been rescued from the plant. Authorities would now focus on evacuating the wounded and medics, and helping residents elsewhere in Mariupol and surrounding settlements to safety, he said.

Russian-backed separatists have also reported a total of 176 civilians evacuated from the plant. It was not clear if civilian men were still there.

Ukrainian fighters in the plant have vowed not to surrender. It was unclear how many remained, and Ukrainian officials fear Russian forces want to wipe them out by Monday, when Moscow commemorates the Soviet Union's victory over Nazi Germany in World War Two. read more

"He's in a frame of mind in which he doesn't believe he can afford to lose," Burns said at a Financial Times event.

Putin declared victory in Mariupol on April 21, ordered the plant sealed off and called for Ukrainian forces inside to disarm. Russia later resumed its assault. read more

Moscow calls its actions since Feb. 24 a "special military operation" to disarm Ukraine and rid it of anti-Russian nationalism fomented by the West. Ukraine and the West say Russia launched an unprovoked war.

In Kyiv on Saturday, the World Health Organization said it had documented 200 attacks on healthcare facilities in Ukraine, the latest allegations of war crimes by Russian forces. Russia has denied attacking civilian targets. read more

Mariupol, which lies between the Crimean Peninsula seized by Moscow in 2014 and parts of eastern Ukraine taken by Russia-backed separatists that year, is key to linking the two Russian-held territories and blocking Ukrainian exports.

Ukraine's general staff said Russia's offensive in eastern Ukraine aimed to establish full control over the Donetsk and Luhansk regions and maintain the land corridor between these territories and Crimea.

Ukrainian armed forces fighting in the two eastern regions controlled by Russian-speaking separatists said in a Facebook post they fought off nine enemy attacks on Saturday, destroying 19 tanks and 24 other armoured vehicles as well as downing a helicopter.

Luhansk regional governor Serhiy Gaidai said Russia dropped a bomb on a school in the village of Bilohorivka, where about 90 people were sheltering. Around 30 have been rescued so far, he said on Facebook.

The Russian defence ministry did not immediately respond to a request for comment about the alleged bombing.

Zelenskiy in his address expressed outrage over Russian shelling overnight that destroyed a museum dedicated to the 18th century philosopher and poet Hryhoriy Skovoroda in the village of Skovorodynivka near Kharkiv. read more

Russia's defence ministry said it destroyed a large stockpile of military equipment from the United States and European countries near the Bohodukhiv railway station in the Kharkiv region.

Reuters could not independently verify either side's statements about battlefield events.

U.S. officials have said the United States has provided intelligence to Ukraine to help counter the Russian assault, but have denied this intelligence includes precise targeting data.

Washington and European members of the transatlantic NATO alliance have supplied Kyiv with heavy weapons, but say they will not take part in the fighting.

Ukraine has repeatedly denied any blame for the incidents, saying it believes Russia is staging the attacks to provoke war. Moscow, too, has denied blame. read more

ZAPORIZHZHIA, Ukraine, May 2: Ukrainian civilians holed up inside a steel plant in Mariupol under siege by Russian forces nearly... Read More...

KHARKIV, Ukraine, May 1: Ukrainian forces fought village by village Saturday to hold back a Russian advance through the country’s... Read More...

Russia demands Mariupol lay down arms but Ukraine says no

LVIV, Ukraine, March 21: Russia demanded that Ukrainians in the besieged city of Mariupol lay down their arms Monday in... Read More...