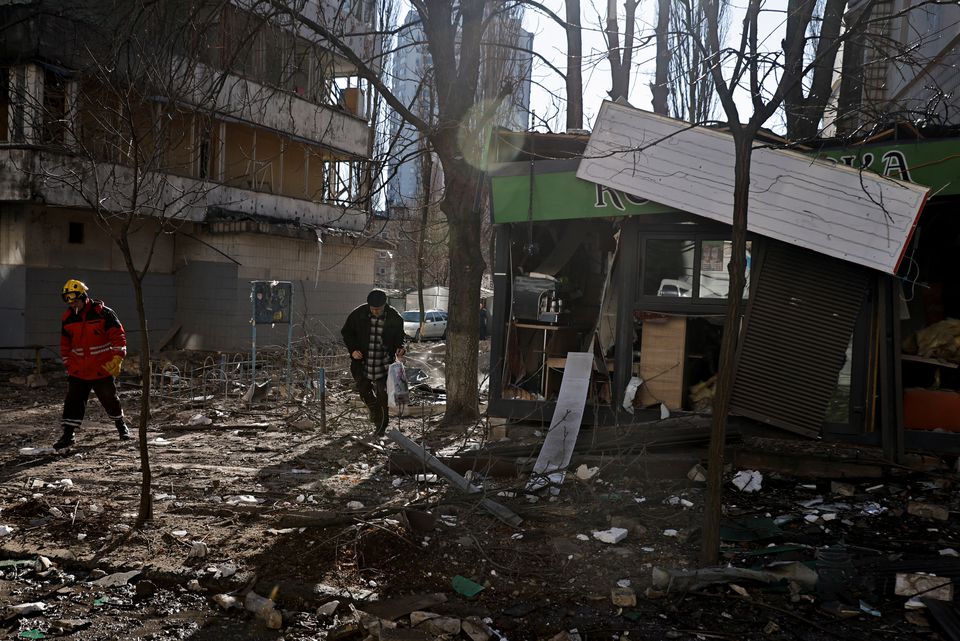 LVIV/KYIV, Ukraine, March 16: About 20,000 people have managed to escape the besieged port of Mariupol in private cars, the Ukrainian interior ministry said on Wednesday, but hundreds of thousands remain trapped by Russian shelling, many without heating, power or running water.

Russian forces have focused on Mariupol, constantly bombarding it for the past two weeks, as it is a key city on the Azov Sea coast which they must gain control of to push further west.

Ukrainian officials estimate that more than 2,500 residents have been killed in the fighting and at least 200,000 are in urgent need of evacuation.

Moscow has not captured any of Ukraine's 10 biggest cities following its invasion that began on Feb. 24, the largest assault on a European state since 1945.

Russian forces are struggling to overcome the challenges posed by Ukraine's terrain, according to Britain's Ministry of Defence in an intelligence report on Wednesday.

Russian troops have remained largely tied to Ukraine's road network and have demonstrated a reluctance to conduct off-road manoeuvres. The destruction of bridges by Ukrainian forces has also played a key role in stalling Russia's advance, it said.

And Russia's continued failure to gain control of the air has drastically limited its options.

"The tactics of the Ukrainian Armed Forces have adeptly exploited Russia's lack of manoeuvre, frustrating the Russian advance and inflicting heavy losses on the invading forces," said the report.

Russia calls its actions a "special military operation" to demilitarise and "denazify" Ukraine. Ukraine and Western allies call this a baseless pretext for a war that has raised fears of wider conflict in Europe.

Ukrainian officials have raised hopes the war could end sooner than expected, possibly by May, saying Moscow may be coming to terms with its failure to impose a new government by force and running out of fresh troops. read more

"The meetings continue, and, I am informed, the positions during the negotiations already sound more realistic. But time is still needed for the decisions to be in the interests of Ukraine," Zelenskiy said in a video address ahead of the next round of talks.

In a hint of a possible compromise, Zelenskiy said earlier Ukraine was prepared to accept security guarantees from the West that stop short of its long-term goal of joining NATO. Moscow sees any future Ukraine membership of the Western alliance as a threat and has demanded guarantees it will never join.

Kremlin spokesperson Dmitry Peskov said it was too early to predict progress in the talks. "The work is difficult, and in the current situation the very fact that (the talks) are continuing is probably positive."

U.S. President Joe Biden will make his first visit to Europe since Russia invaded Ukraine to discuss the crisis with NATO allies next week, the White House said.

Biden will attend a NATO leaders meeting at the military alliance's headquarters in Brussels on March 24.

Biden is expected to announce an additional $800 million in security assistance to Ukraine on Wednesday, a White House official said.

NATO is set to tell its military commanders on Wednesday to draw up plans for new ways to deter Russia from future military action, including more troops and missile defences in eastern Europe, officials and diplomats said.

"We need to reset our military posture for this new reality," NATO Secretary General Jens Stoltenberg told reporters on Tuesday. "Ministers will start an important discussion on concrete measures to reinforce our security for the longer term, in all domains."

At least 10 of NATO’s biggest allies, including the United States, Britain and France, have deployed more troops, ships and warplanes to its eastern flank, and put more on stand-by.

Just over 3 million people have now fled Ukraine, according to the United Nations, with over 1.8 million arriving in neighbouring Poland. Its prime minister and those of Slovenia and the Czech Republic were in Kyiv on Tuesday to show solidarity.

In Kyiv, around half of the 3.4 million residents have fled and some spend nights sheltering in metro stations.

The emergency service in Ukraine's eastern region of Kharkiv said on Wednesday that at least 500 residents of the city of Kharkiv have been killed since Russia invaded. Reuters was unable immediately to verify the information.

Fox News said a second journalist working for the cable network was killed in Ukraine in the same incident in which a Fox cameraman died when their vehicle was struck on Monday by incoming fire. read more

The conflict has brought economic isolation upon Russia and the economic cost was fully exposed on Wednesday as its sanctions-ravaged government teetered on the brink of its first international debt default since the Bolshevik revolution.

Moscow was due to pay $117 million in interest on two dollar-denominated sovereign bonds it had sold back in 2013, but it faces limits on making payments and has talked of paying in roubles, which would trigger a default. read more

The crisis is also being felt in the form of spiralling energy costs in many Western countries with some heavily reliant on exports from Russia and after a U.S. ban on imports of oil from the country.

ZAPORIZHZHIA, Ukraine, May 2: Ukrainian civilians holed up inside a steel plant in Mariupol under siege by Russian forces nearly... Read More...

Russia demands Mariupol lay down arms but Ukraine says no

LVIV, Ukraine, March 21: Russia demanded that Ukrainians in the besieged city of Mariupol lay down their arms Monday in... Read More...