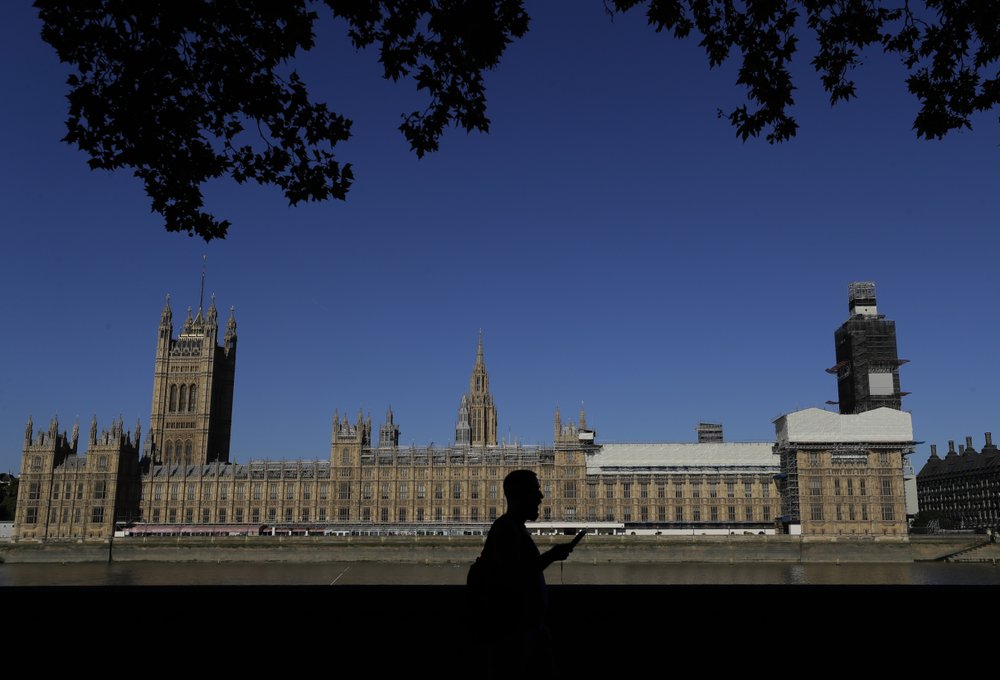 A pedestrian passes Britain's Houses of Parliament on the bank of The River Thames in London, Thursday, Aug. 29, 2019. Jacob Rees-Mogg, The leader of the British House of Commons has defended Prime Minister Boris Johnson's move to suspend parlliament, a move that gives his political opponents less time to block a no-deal Brexit before the October 31 withdrawal deadline. (AP Photo/Kirsty Wigglesworth)

LONDON,  Sept 1: It’s long been known that Britain’s Parliament building must be vacated for urgent repairs that will take years and cost billions, but the problem now goes beyond the water leaks and vermin infestation to Britain’s global reputation as a model of democracy-in-action.

In parts of the world where Britain’s parliamentary system and adherence to the rule of law provided a model to emerging nations, Prime Minister Boris Johnson’s brusque decision to shut down Parliament for crucial weeks ahead of the looming Brexit deadline is seen by some as proof that Britain, too, can be subject to a power grab.

Johnson’s gambit may pay off if he is able to make Brexit a reality on Oct. 31 without doing grave damage to Britain’s economy, but the widely held perception that he is shuttering Parliament to squelch debate (despite his claims to the contrary) has been roundly condemned in key parts of the former British Empire, including some where Queen Elizabeth II is still accorded the status of head of state.

Many Britons — politicians and the public alike — have a lofty view of the country’s role in world affairs, emphasizing its seat on the United Nations Security Council, its nuclear arsenal, and its traditional influence in trouble spots like the Middle East. But the prolonged impasse over Brexit, which was approved more than three years ago but still hasn’t taken place, has taken a toll on how much of the world views Britain’s vaunted political institutions.

Nicholas Sengoba, a columnist in the former British colony of Uganda, said Johnson’s action shows that Britain is not immune to the abuse of power that has plagued some African nations. “The whole notion that a British prime minister cannot be as powerful as an African dictator has been stripped off,” he said.

The prolonged Brexit stalemate in Britain has made the former colonial power “look extremely bad” because there is no clear leadership and no consensus on what the actual consequences of a “no deal” Brexit might be, he said.

Britain’s longstanding reputation for openness and fair play has been tarnished by a years-long rift in the opposition Labour Party over whether party chief Jeremy Corbyn and his top advisers tolerate anti-Semitism — there has even been a police investigation of some party members — and a desire to keep foreigners from settling in Britain under liberal European Union regulations was at least in part responsible for the 2016 Brexit vote in favor of leaving the 28-nation bloc.

Many academics warn that the loss of EU funding, and a stiffening of rules that made it easy for Europeans to study, research and teach in Britain, will lower the standards of Britain’s world-class scientific and medical institutions, and perhaps even dim the quality of the country’s brilliant arts scene. Even the respected royal family is not untouched, with new photographs and stories that document Prince Andrew’s association with pedophile financier Jeffrey Epstein, who killed himself in prison in August.

Some have also been surprised by the queen’s role in the shutdown of Parliament. As head of state in a constitutional monarchy, Queen Elizabeth II is required to maintain strict neutrality on all political issues, which left her little choice but to approve Johnson’s request to shutter Parliament for a longer-than-usual time period.

No one outside her closest family members and inner circle of advisers is likely to ever know whether she felt Johnson’s request was appropriate or gave the executive branch too much power by limiting debate in the legislature, just as no one in the media or public can say with certainty how the queen feels on the underlying question of whether it is wise for Britain to leave the EU.

Britain’s tortured path toward Brexit — perhaps now nearing its climax — has exacted a price. In New Zealand, another former colony, the latest moves by Johnson have provoked some talk about whether it’s time to change its status as a constitutional monarchy with Elizabeth as a figurehead head of state (she does, after all, reside nearly 12,000 miles away) and instead transform into a republic.

In a satirical tweet, newspaper columnist Dave Armstrong wrote that it would be dangerous for New Zealand to become a republic “as it would sever our ties with the UK — a stable parliamentary democracy where coups, dictatorships and tyranny by the minority simply doesn’t occur. Discuss.”

University of Otago professor Robert Patman told a New Zealand newspaper that other countries are suspicious that Britain, which he described as gripped by its worst economic and diplomatic crisis since World War II, is behaving like a banana republic, and those suspicions have been deepened by Johnson’s latest actions.

“At the moment there’s a very dangerous situation in the U.K.,” he said.

Johnson’s suspension spawned protests in many British cities Saturday, a phenomenon familiar in Canada, where the queen is still the head of state. Former Canadian Prime Minister Stephen Harper sparked major protests after he suspended Parliament in 2008 and 2009, but the protests eventually dwindled and he managed to remain in power despite a no-confidence vote accusing his government of contempt of Parliament.

The influential Toronto newspaper The Globe and Mail said in an editorial that Johnson’s suspension of Parliament must be reversed: “It’s wrong. It’s undemocratic. It certainly isn’t British,” the newspaper said.

A cartoon in the Toronto Star newspaper showed Johnson with the queen on a boat that’s about to go over a waterfall. Johnson says: “Hold on to your knickers, not even democracy can stop me now!”

The spectacle of Britain’s prolonged political impasse over Brexit, and now the decision to shutter Parliament at a key time, is contributing to a sense in Canada that the old colonial power is in decline.

Robert Bothwell, a University of Toronto professor of Canadian history, said Britain has been receding in the Canadian consciousness since the 1960s.

“There is about a 150-degree change in the way Canadians see Britain since the 1960s,” he said. “It’s not gone but it doesn’t exercise the same political economic draw as it did fifty years ago.”