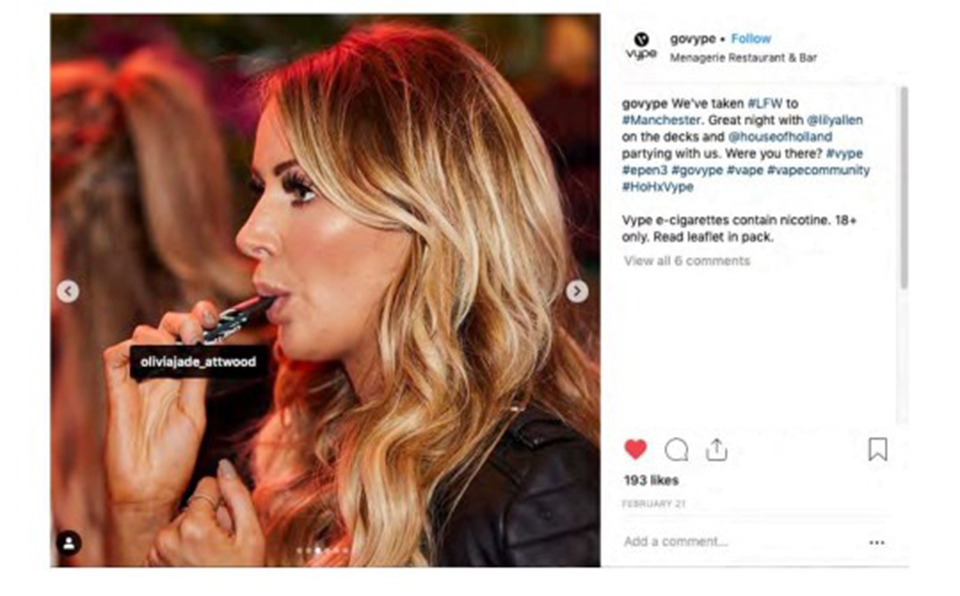 UNITED KINGDOM, Dec 18: Companies including British American Tobacco (BAT) (BATS.L) will be barred from promoting e-cigarettes on Instagram and other social media sites as a result of a ruling by the UK’s advertising watchdog on Wednesday.

Complaints from health groups had argued the posts were likely to appeal to people below 18 years of age.

The ASA ruled that BAT’s posts breached online advertising rules including the use of celebrities such as British singer Lily Allen.

Its ruling means BAT and the three other firms must immediately stop using Instagram to promote e-cigarettes in the UK, stop using influencers and remove any posts that breach UK advertising rules.

In complaints filed by lobby groups Action on Smoking and Health, Campaign for Tobacco-Free Kids and Stopping Tobacco Organizations and Products, the companies were also accused of using models who appeared to be under 25, which is prohibited in the UK.

Tobacco companies have been investing millions of dollars in their e-cigarette businesses as sales of traditional cigarettes decline in developed economies.

But a spate of vaping-related deaths and illnesses and high teen addiction to e-cigarettes have raised concerns over the safety of these devices.

In the United States, 52 deaths and nearly 2,500 lung illnesses have been associated with vaping.

The companies are allowed to provide factual product information such as the name, content and price of their e-cigarettes on their own websites.

“This is a major step forward in stopping the tobacco industry from promoting its new addictive products to children and teenagers,” said Anna Gilmore, director of the Tobacco Control Research Group at the University of Bath.

“But given that cigarette sales are falling and tobacco companies are desperate to recruit young people into using these new products, ongoing vigilance is essential,” she said.

BAT, the maker of Dunhill cigarettes, reported vaping products revenue of 189 million pounds for the first half of this year, up from 118 million a year earlier.

“While this is a mild negative for BAT’s UK revenue stream from vape products in the UK, it’s immaterial to the bottom line,” Liberum analyst Nico von Stackelberg said in a note.