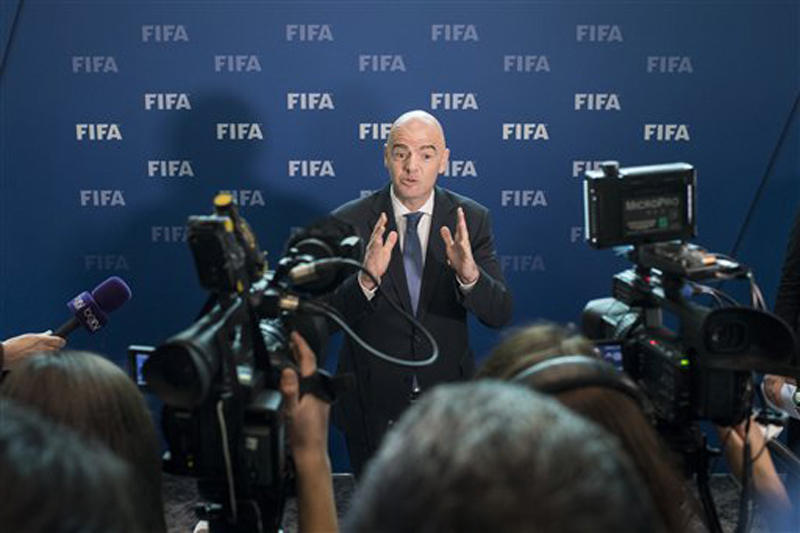 GENEVA, Oct 26: UEFA broke no rules when it sent a multimillion dollar loan for a betting company investment by the Slovenian soccer federation, according to a document seen by The Associated Press.

The 4 million euro ($4.4 million) deal in June 2015 — which a UEFA report says was "granted in real exception" — has been scrutinized because it was signed off by then-UEFA general secretary Gianni Infantino and then-Slovenian soccer president Aleksander Ceferin. They have since won unexpected elections as presidents of FIFA and UEFA, respectively.

A Norwegian magazine reported that FIFA ethics prosecutors are investigating Infantino's part in the loan. It said UEFA flouted financial protocol to approve the money, and noted that FIFA's code of ethics prohibits individuals from investing in soccer gambling operators.

The UEFA disciplinary committee then asked its investigations unit to report on claims initially made by Scandinavian media last month.

The inquiry report concluded that UEFA and the Slovenian federation "respected the relevant provisions and conditions" of granting loans to members.

The report notes that FIFA's ethical rules on betting and integrity of matches relate to "persons," not institutions. The code, therefore, does "neither apply to UEFA, nor to national associations," the document concludes.

Despite UEFA's internal report, FIFA ethics prosecutors can independently seek evidence and demand witness statements. However, it is unclear if an early stage probe has begun.

The investigatory chamber of the FIFA ethics committee said it would never confirm an ongoing preliminary inquiry. But that can lead to a formal case being opened, which would typically be announced.

In July, FIFA appointed Slovenia state auditor Tomaz Vesel to chair its independent audit and compliance committee and a panel which sets salaries. Norwegian magazine Josimar reported that Vesel plays on an amateur soccer team with Ceferin, who it claimed was supported by Infantino's staff in what became a landslide win for the UEFA presidency in September.

Interviewed by the AP last week, Ceferin described reports seeking to implicate him as "mosquito bites" helped by an old guard of soccer insiders opposing him.

"They had to try to invent some non-stories," Ceferin said at UEFA headquarters in Nyon, Switzerland, insisting the loan was "as clean as possible. We asked for a loan, it was a strategic investment."

The report says Infantino was not directly involved in Slovenia's formal request in December 2014, which had "one sole known and well-documented aim" — to buy a 17.3 percent share of the state lottery Sportna loterija. The owners include the Slovenian Olympic committee and national ski federation.