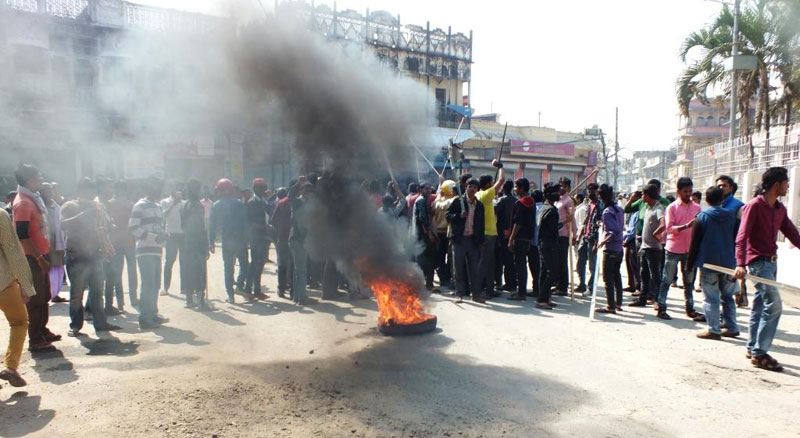 RAJBIRAJ, March 6: CPN-UML leaders are scheduled to address mass meeting in Saptari on Monday under the party's Mechi-Mahakali National Campaign while the cadres of United Democratic Madhesi Front (UDMF) are making preparation from early morning to disrupt the UML's program in the district.

The cadres of Madhes-based parties have announced 'banda' (general strike) in the district and their cadres are roaming around district headquarters Rajbiraj appealing for complete shut-down of the market.

The cadres are burning tyres in some places while roaming around the city with sticks and bamboos on their hands.

However, Dan Bahadur Karki, the spokesperson of Nepal Police in Saptari, said that the situation in the district is within police control despite the 'banda' imposed by the UDMF cadres. He informed that three individuals involved in throwing stones on buses moving on East-West Highway are arrested from Kanchanpur, Saptari.

Though Rajbiraj has remained tense, the vehicular movement on East-West Highway is normal.

Meanwhile, the CPN-UML, which shifted its scheduled program from Raj Stadium in Rajbiraj to three kilometers north at Gajendra Narayan Singh Industrial Area at Maleth VDC to avoid clash with UDMF cadres, has been preparing for the program at the venue.

According to party's district committee chair Gobinda Neupane, UML cadres are coming to the program venue while some are involved in preparing stage.

Large number police personnel are deployed at the premises and periphery of the industrial area.

ITAHARI: CPN-UML is holding corner meetings at Jhumka and Inaruwa of Sunsari districts on Monday, the third day of its Mechi-Mahakali National Campaign. However, the corner meeting scheduled to be held at Laukahi has been cancelled.

The UML has started the campaign to discard 'rumors' against the party regarding the Madhes issues.

According to Dwariklal Chaudhary, the chairman of party's district committee, the Laukahi program was cancelled as participation seems to be low as well as the possible disruption from the United Democratic Madhesi Front.

Sickle Cell anemia rampant among Tharus in Western Terai, 11% of the indigenous community have the disease
24 minutes ago