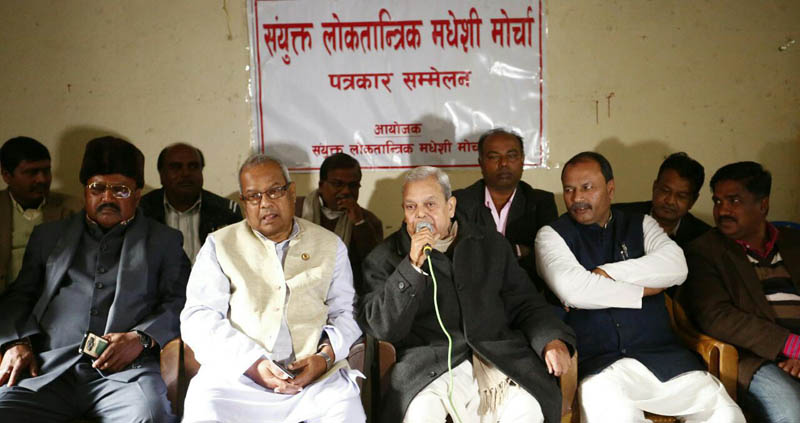 KATHMANDU, April 12: The agitating United Democratic Madheshi Front (UDMF) has strongly objected to the new constitution amendment bill registered by the government at the Secretariat of the Legislature-Parliament and has decided to boycott the local polls slated for May 14.

A meeting of the Madhesh- based parties held at the office of Tarai Madhesh Democratic Party (TMDP) on Wednesday accused the government of endorsing the new constitution amendment stating that the bill is against the spirit of the previous agreements.

Terming the endorsement of the bill as 'betrayal' by the ruling alliance, the Madhesh based-parties decided to protest against the bill and to not participate in the upcoming local level elections.

The UDMF has announced the fresh protest programs against the bill including the mass demonstration in Tarai district on Thursday and sit-ins in all the district office of the Election Commission on Sunday.

The government had registered the 11-point constitution amendment bill at the Legislature –Parliament on Tuesday hoping that the main opposition CPN-UML and the UDMF would agree to the bill.

However, the CPN-UML has already opposed the bill arguing that the bill would strip the local bodies of its rights.

KATHMANDU, April 12: The umbrella organizations of the local unit have strongly opposed against the registration of the revised statute... Read More...

KATHMANDU, Dec 31: In an attempt to allay the concerns of the agitating United Democratic Madhesi Front (UDMF) that the major... Read More...