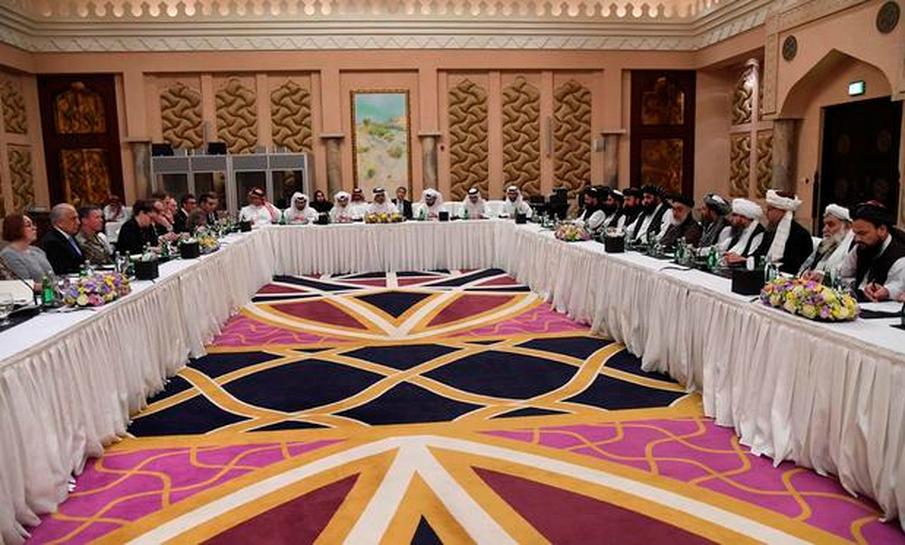 DOHA, March 13: U.S. and Taliban negotiators wrapped up their longest round of peace talks on Tuesday with progress made but no agreement on when foreign troops might withdraw, officials from both sides said.

The 16 days of talks, in which the United States also sought assurances that the Taliban would not allow militant groups to use Afghanistan to stage attacks, are expected to resume in late March.

Khalilzad, an Afghan-born veteran U.S. diplomat, said the sides made progress on discussions about counter-terrorism assurances and a troop withdrawal from Afghanistan.

“The conditions for peace have improved. It’s clear all sides want to end the war. Despite ups and downs, we kept things on track and made real strides,” Khalilzad said on Twitter.

The Taliban have held multiple rounds of peace talks with the American team led by Khalilzad but have so far refused to talk to the Afghan government.

“When the agreement in draft about a withdrawal timeline and effective counter-terrorism measures is finalised, the Taliban and other Afghans, including the government, will begin intra-Afghan negotiations on a political settlement and comprehensive ceasefire,” Khalilzad said.

Taliban spokesman Zabihullah Mujahid said the sides made progress on the issues of withdrawing foreign forces and preventing future attacks on other countries from Afghanistan.

But, in a statement, he stressed that no agreement was reached on a ceasefire or talks with the Afghan government.

A spokesman for Afghan President Ashraf Ghani tweeted that he hoped to see a long-term ceasefire agreement and the start of direct talks between the government and Taliban soon.

The talks were held in a closed-off banquet hall at the five-star Ritz-Carlton seaside hotel on the southern end of Doha.

Qatar has hosted the Taliban’s political office since 2013 and has looked to position itself as an important regional player for conflict resolution.

“We appreciate how difficult it is to end 18 years of war. Qatar looks forward to resumption of the talks in the coming weeks,” said Qatar’s lead mediator Mutlaq Bin Majid Al-Qahtani.

Khalilzad said he would return to Washington to brief U.S. and international officials.

Talks ended on a day in which Taliban insurgents stepped up pressure on the battlefield, killing 20 Afghan soldiers and capturing another 20 in western Afghanistan. In another province, officials said an air strike killed both Taliban fighters and civilians.

About 14,000 U.S. troops are based in Afghanistan as part of a U.S.-led NATO mission to train, assist and advise Afghan forces. Some U.S. forces carry out counter-terrorism operations.

The United States has been pushing the Taliban to agree to a ceasefire and to talk with Afghanistan’s government, which the militant group considers a U.S. puppet regime.

“The U.S. officials were pressing the Taliban to declare a ceasefire, but our leaders were clear that a ceasefire can only be announced after the foreign force withdrawal announcement (is) made,” said a senior Taliban commander privy to the talks.

Another Taliban source said on condition of anonymity there was frustration on some issues during the peace talks and that a senior member of the Islamist group told U.S. officials at one point that the Taliban are “not their servants” and need no U.S. approval for any future decisions.

Washington intervened in Afghanistan in 2001 to help overthrow a Taliban government that had sheltered Osama bin Laden’s al Qaeda group, responsible for the Sept. 11 attacks that killed nearly 3,000 people in the United States.

A U.S.-led international force has fought since then against a Taliban insurgency. The foreign presence peaked in 2010 at more than 130,000 troops including 100,000 Americans, but was sharply cut back after 2014.

Nearly 3,500 foreign troops including 2,300 Americans have died in Afghanistan. The United Nations has tallied the deaths of more than 30,000 Afghan civilians since 2009, most killed by insurgent attacks. Tens of thousands of members of the Afghan security forces and an unknown number of insurgents have also been killed.

US envoy to resume talks with Taliban on ending Afghan war

KABUL, August 21: The United States envoy negotiating with the Taliban for an end to nearly 18 years of fighting... Read More...

ISLAMABAD, June 29: A fresh round of talks between the U.S. and the Taliban began in Qatar on Saturday, just days... Read More...