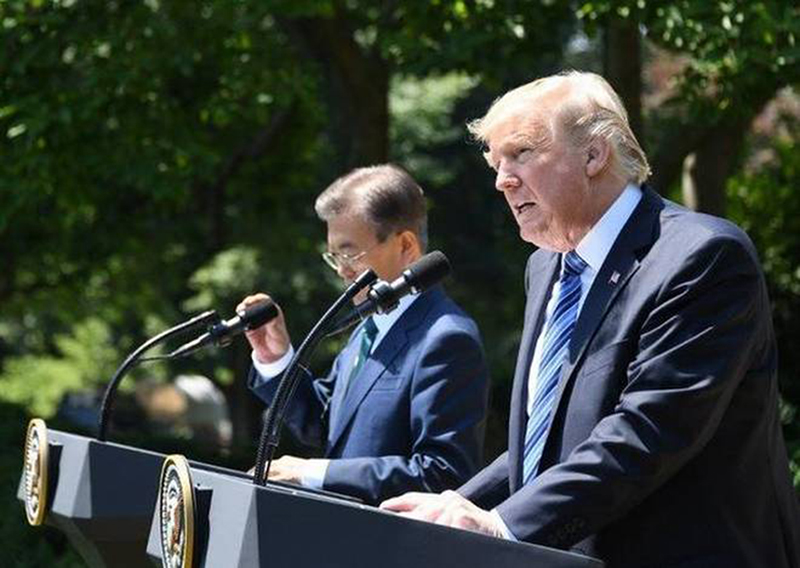 Trump also gave “conceptual” approval to the purchase by the South of billions of dollars of U.S. military hardware, the White House said.

The South wants to raise the missile cap to boost its defences against the reclusive North, which is pursuing missile and nuclear weapons programmes in defiance of international warnings and UN sanctions.

“The two leaders agreed to the principle of revising the missile guideline to a level desired by South Korea, sharing the view that it was necessary to strengthen South Korea’s defence capabilities in response to North Korea’s provocations and threats,” South Korea’s presidential Blue House said.

North Korea sharply raised regional tension this week with the launch of its Hwasong-12 intermediate-range ballistic missile that flew over Japan and landed in the Pacific.

That followed the test launch of two long-range ballistic missiles in July in a sharply lofted trajectory that demonstrated a potential range of 10,000 km (6,000 miles) or more that would put many parts of the U.S. mainland within striking distance.

North Korea has been working to develop a nuclear-tipped missile capable of hitting the United States and has recently threatened to land missiles near the U.S. Pacific territory of Guam.

South Korea has said it wants to revise the agreement to increase the cap on the payload.

The two countries agreed to the cap as part of a commitment to a voluntary international arms-control pact known as the Missile Technology Control Regime, aimed at limiting the proliferation missiles and nuclear weapons.

The two leaders pledged to continue to apply strong diplomatic and economic pressure on North Korea and to make all necessary preparations to defend against the growing threat by the North, the White House said.

The White House did not mention the voluntary bilateral agreement but said the two leaders agreed to strengthen their defence cooperation and South Korea’s defence capabilities.

Trump “provided his conceptual approval of planned purchases by South Korea of billions of dollars in American military equipment”, the White House said.

Trump, who has warned that the U.S. military is “locked and loaded” in case of further North Korean provocation, reacted angrily to the latest missile test, declaring on Twitter that “talking is not the answer” to resolving the crisis.