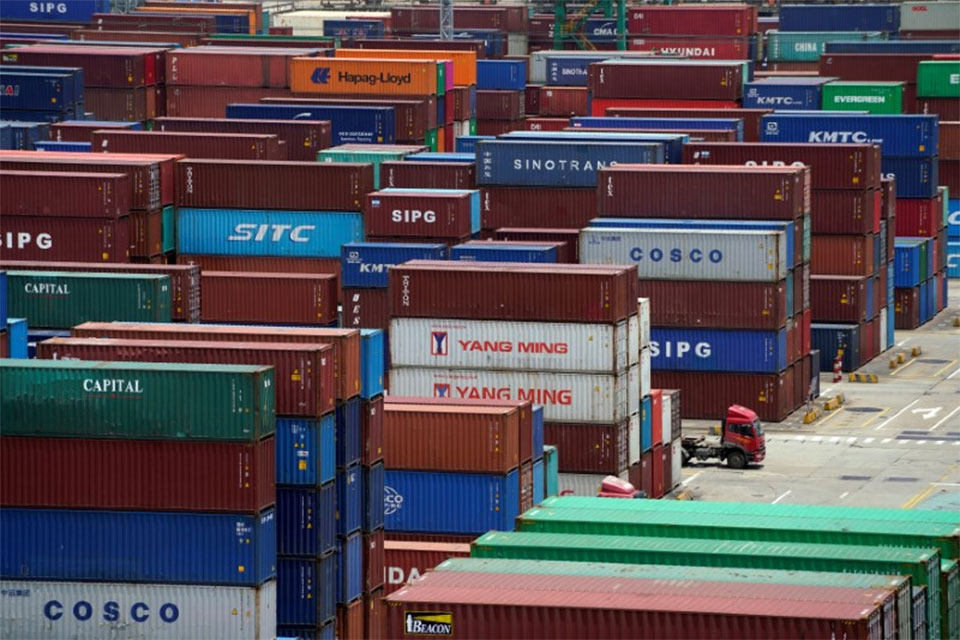 Shipping containers are seen at a port in Shanghai, China July 10, 2018. REUTERS/Aly Song

WASHINGTON/BEIJING, July 11: The Trump administration raised the stakes in its trade dispute with China on Tuesday, saying it would slap 10 percent tariffs on an extra $200 billion worth of Chinese imports.

The news sent stocks tumbling, with China’s markets leading the declines, and prompted a senior Chinese commerce ministry official to warn that the United States was harming the global trade order.

U.S. officials released a list of thousands of Chinese imports the administration wants to hit with the new tariffs, including hundreds of food products as well as tobacco, chemicals, coal, steel and aluminum.

“For over a year, the Trump administration has patiently urged China to stop its unfair practices, open its market, and engage in true market competition,” U.S. Trade Representative Robert Lighthizer said in announcing the proposed tariffs.

“Rather than address our legitimate concerns, China has begun to retaliate against U.S. products ... There is no justification for such action,” he said in a statement.

In financial markets, MSCI’s broadest index of Asia-Pacific shares outside Japan fell 1.5 percent, while the main indexes in Hong Kong and Shanghai fell more than 2 percent. S&P 500 and Dow futures dropped around 1 percent, pointing to a weak opening on Wall Street later on Wednesday.

President Donald Trump has said he may ultimately impose tariffs on more than $500 billion worth of Chinese goods - roughly the total amount of U.S. imports from China last year.

The new list published on Tuesday targets many more consumer goods than those covered under the tariffs imposed last week, raising the direct threat to consumers and retail firms.

The tariffs will not be imposed until after a two-month period of public comment on the proposed list, but some U.S. business groups and senior lawmakers were quick to criticize the move.

The U.S. Chamber of Commerce has supported Trump’s domestic tax cuts and efforts to reduce regulation of businesses, but it has been critical of Trump’s aggressive tariff policies.

“Tariffs are taxes, plain and simple. Imposing taxes on another $200 billion worth of products will raise the costs of every day goods for American families, farmers, ranchers, workers, and job creators. It will also result in retaliatory tariffs, further hurting American workers,” a Chamber spokeswoman said.

The Retail Industry Leaders Association, a lobby group representing the largest U.S. retailers, said: “The president has broken his promise to bring ‘maximum pain on China, minimum pain on consumers.’”

“American families are the ones being punished. Consumers, businesses and the American jobs dependent on trade, are left in the crosshairs of an escalating global trade war,” said Hun Quach, the head of international trade policy for the group.

In Beijing, Li Chenggang, assistant minister at China’s Commerce Ministry, said at a forum in Beijing that the latest U.S. proposals interfered with the globalization of the world economy and that China’s support for a multilateral trade system would not change.

Although it was not a direct reaction to the new move from Trump’s administration, the official English-language newspaper China Daily said in an editorial that Beijing had to stand up to Washington.

“China has no option but to fight fire with fire. It has to resolutely fight back while taking proper measures to help minimize the cost to domestic enterprises and further open up its economy to global investors,” it said.

Trade war begins: China retaliates with 25% tariffs on $34 billion worth of US imports