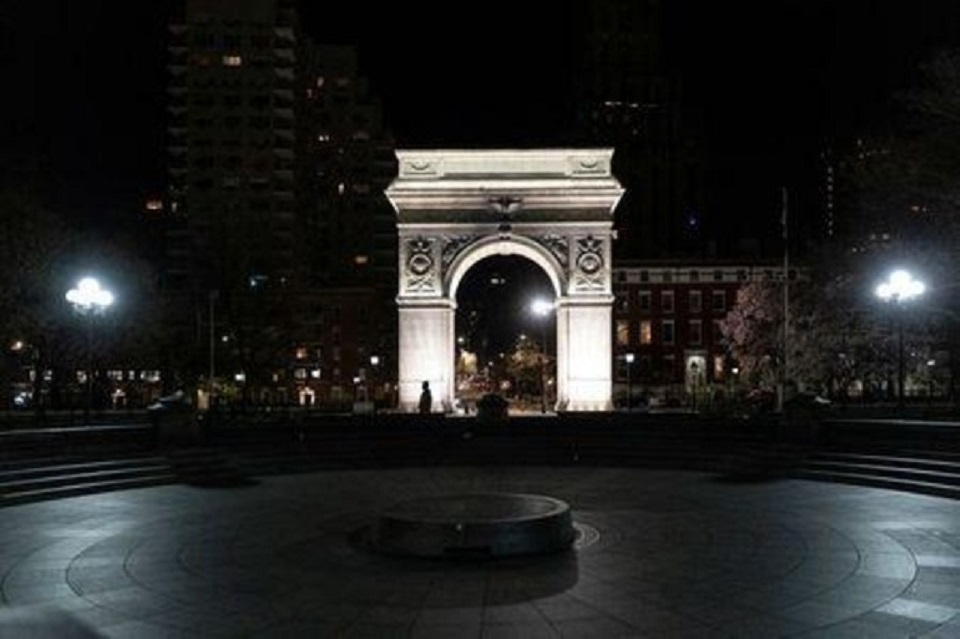 An empty street is seen in Washington Square Park during the outbreak of the coronavirus disease (COVID-19) in Brooklyn, New York City, U.S., March 27, 2020. REUTERS/Jeenah Moon

NEW YORK, March 27: The sum of known coronavirus U.S. cases soared well past 100,000, with more than 1,600 dead, as weary doctors and nurses coping with shortages resorted to extremes ranging from hiding scarce medical supplies to buying them on the black market.

American healthcare workers in the trenches of the pandemic appealed on Friday for more protective gear and equipment to treat a surge in patients that is already pushing hospitals to their limits in virus hot spots such as New York City, New Orleans and Detroit.

“We are scared,” said Dr. Arabia Mollette of Brookdale University Hospital and Medical Center in New York City’s Brooklyn borough. “We’re trying to fight for everyone else’s life, but we also fight for our lives as well, because we’re also at the highest risk of exposure.”

Doctors are especially concerned about a shortage of ventilators, machines that help patients breathe and are widely needed for those suffering from COVID-19, the pneumonia-like respiratory ailment caused by the highly contagious novel coronavirus.

Hospitals have also sounded the alarm about scarcities of drugs, oxygen tanks and trained staff.

The number of confirmed U.S. infections rose by about 18,000 on Friday, the highest jump in a single day, to more than 103,000. The United States has led the world in coronavirus cases since its count of known infections eclipsed those of China and Italy on Thursday.

With at least 1,634 lives lost as of Friday night - also a record daily increase - the United States ranked sixth in national death tolls from the pandemic, according to a Reuters tabulation of official data.

As shortages of key medical supplies abounded, desperate physicians and nurses were forced to take matters into their own hands.

New York-area doctors say they have had to recycle some protective gear, or even resort to bootleg suppliers.

Dr. Alexander Salerno of Salerno Medical Associates in northern New Jersey described going through a “broker” to pay $17,000 for masks and other protective equipment that should have cost about $2,500, and picking them up at an abandoned warehouse.

“You don’t get any names. You get just phone numbers to text,” Salerno said. “And so you agree to a term. You wire the money to a bank account. They give you a time and an address to come to.”

Nurses at Mount Sinai Hospital in New York said they were locking away or hiding N-95 respirator masks, surgical masks and other supplies that are prone to pilfering if left unattended.

“Masks disappear,” nurse Diana Torres said. “We hide it all in drawers in front of the nurses’ station.”

One nurse at Westchester Medical Center, in the suburbs of the city, said colleagues have begun absconding with scarce supplies without asking, prompting better-stocked teams to lock masks, gloves and gowns in drawers and closets.

An emergency room doctor in Michigan, an emerging epicenter of the pandemic, said he was wearing one paper face mask for an entire shift due to a shortage and that hospitals in the Detroit area would soon run out of ventilators.

“We have hospital systems here in the Detroit area in Michigan who are getting to the end of their supply of ventilators and have to start telling families that they can’t save their loved ones because they don’t have enough equipment,” the physician, Dr. Rob Davidson, said in a video posted on Twitter.

He had previously resisted mounting calls for him to invoke the Defense Production Act, a Korean War-era statute that gives the president broad procurement powers in national emergencies.

“We are truly a hotbed of COVID-19 here in New Orleans,” she said, adding that her hospital was shifting some patients to “telehealth” services that allow them to be evaluated from home.

Hospitals around the country are expected to receive some additional aid from a $2.2 trillion emergency relief bill given final passage by Congress on Friday, after days of wrangling, and signed into law by Trump.

The package will send cash to businesses and unemployed workers suffering from the effects of stay-at-home orders that have had the side effect of strangling the economy.

NEW YORK, Sept 21: The death toll from the spread of coronavirus in the United States was approaching over 200,000... Read More...

MADRID, March 26: The number of coronavirus infections closed in on a half-million worldwide Thursday, with both Italy and the... Read More...