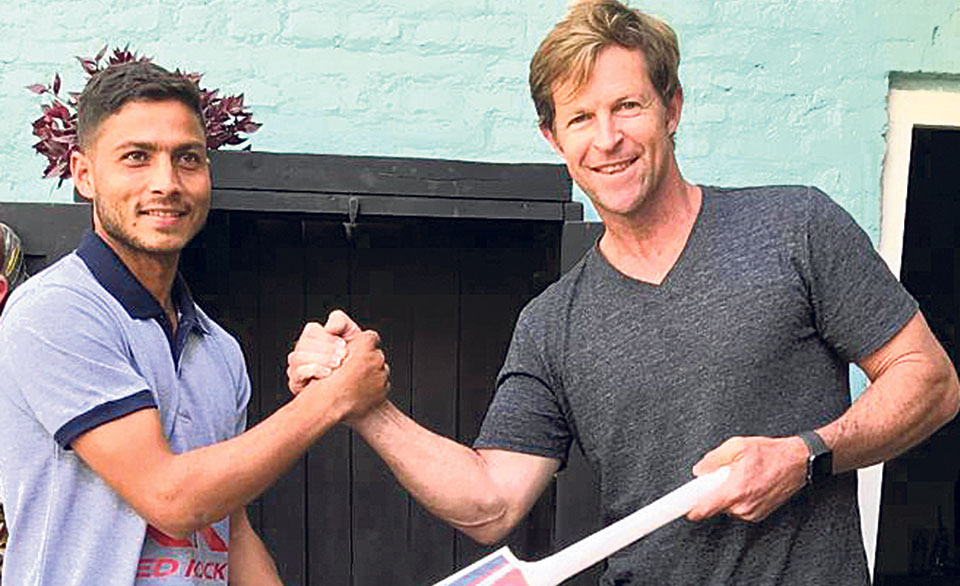 KATHMANDU, Dec 1: The Meerut-based Indian cricket manufacturing company Red Rock Sports have sponsored Nepal’s national U-19 cricketer Bhim Sarki for three years during an official program held in Kathmandu on Friday. According to the contract, Red Rock will provide all the cricket gears and equipments for next three years to Sarki in a deal done in kind and no cash involved.

Teenage batsman Sarki recently represented Nepal in Youth Asia Cup held in September in Dhaka, Bangladesh. The 17-year-old was ecstatic to receive his first ever sponsorship and expressed to have been fueled by the support to do much better in coming days. “I am very happy. This is my first sponsorship. It has boosted me to do better. I am thankful for Red Rock for finding me capable of getting such a deal,” said Sarki. He scored most runs for his team Butwal Blasters in inaugural season of Pokhara Premier League (PPL) held last month in Pokhara. He is set to play for Chitwan Tigers in upcoming Everest Premier League starting on December 8 in Kirtipur.

Manish Shakalkar, a former Ranji player from Haryana, initiated the association between the player and the company as the owners of Red Rock, Subhash Rajput and Shekhar Kaushik, were happy to sponsor him. “We are humbled and ecstatic to help a young and promising player Bhim Sarki from Nepal to realize his potential and dream to represent his senior national side in very near future. We as company always wish for the welfare of the players associated with us,” said Rajput.

The official signing ceremony was attended by national cricket team captain Paras Khadka and South African legend Jonty Rhodes who was here for high performance camp for the last three weeks. The Nepal cricket team skipper was happy for the sponsorship and was optimistic about Sarki’s future endeavors in cricket. “Any kind of sponsorship for a player is great. Players need that support. Really like to thank ‘Red Rock Sports’ for sponsoring one of our very bright prospects. Hopefully, with new kit, new vision and new enterprise, Bhim is going to prosper in his career. I am very glad. Thanks to Manish and the whole team for making the deal possible,” said Khadka.

Global football body FIFA announced another Chinese sponsor on Wednesday, saying that smartphone maker Vivo will be a backer for... Read More...

KATHMANDU, April 2: The third edition of the National Women's and Men's Club League Volleyball Tournament has got a new... Read More...

Number of people dying of coronavirus in Nepal rises to eight
10 hours ago
Tax rise on electric vehicles will hit govt plan of making country self-reliant in energy use: Lawmakers
13 hours ago
Supreme Court orders govt to provide goods to needy for preventing COVID-19 pandemic
6 hours ago
Hong Kong to evacuate its 330 people stranded in Nepal on Monday: report
7 hours ago

LIVE: Meeting of House of Representatives underway
18 hours ago