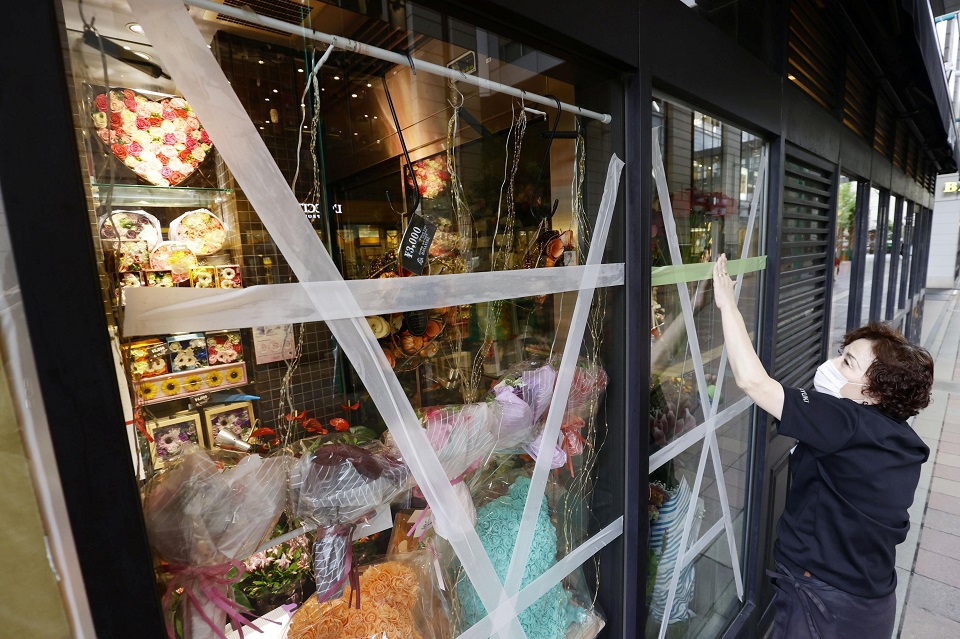 TOKYO, Sept 7: Typhoon Haishen battered Japan’s southern mainland with powerful winds and drenching rain, cutting power to tens of thousands of homes and prompting authorities to call for some 1.8 million people to evacuate.

Haishen was drawing closer to the main southern island of Kyushu. At 12:45 a.m. (1545 GMT on Sunday) on Monday its centre was in the East China Sea, about 110 km (68 miles) southeast of the Goto Islands, west of Nagasaki, according to Japan’s meteorological agency.

“This typhoon is headed toward and may potentially make landfall in Kyushu, bringing record rains, winds, waves and high tides,” Prime Minister Shinzo Abe said at a meeting with cabinet ministers earlier.

“I am asking that people exercise the utmost caution.”

The storm was forecast to carry top sustained winds of up to 216 km per hour (134 mph) by Monday, the meteorological agency said.

Authorities urged evacuations for people in areas across seven prefectures in southern Japan, public broadcaster NHK said, an effort that was complicated by social distancing that meant evacuation centres could take fewer people than normal.

Trees on Yakushima, an island 100 km (60 miles) south of Kagoshima city, could be seen shaking violently in strong winds and driving rain, in a post on Twitter.

Elderly citizens wearing face masks due to the coronavirus outbreak were gathering at evacuation centres in Kagoshima and other parts of southern Japan, footage on NHK showed.

The typhoon has cut power to some 180,000 homes, NHK said adding that public transport services were all stopped in the affected prefectures.

The typhoon was headed north by northwest at 30 kph, the meteorological agency said, forecast to approach the Goto Islands west of Nagasaki around 3 a.m. on Monday (1800 GMT on Sunday) and then move to the Korean peninsula.

One evacuation centre in Miyazaki reached capacity and stopped accepting evacuees as a precaution against the coronavirus, according to NHK.

Airlines have cancelled more than 500 flights departing from Okinawa and southern Japan, NHK said. Bullet train service in southern and western Japan was suspended, it said.

Japan’s coastguard on Saturday suspended for a second day its search for crew missing from a ship that capsized in the East China Sea last week with a cargo of cattle.

TOKYO, Sept 5: Japan is bracing for powerful Typhoon Haishen as it bears down on the country’s southwest, with weather... Read More...