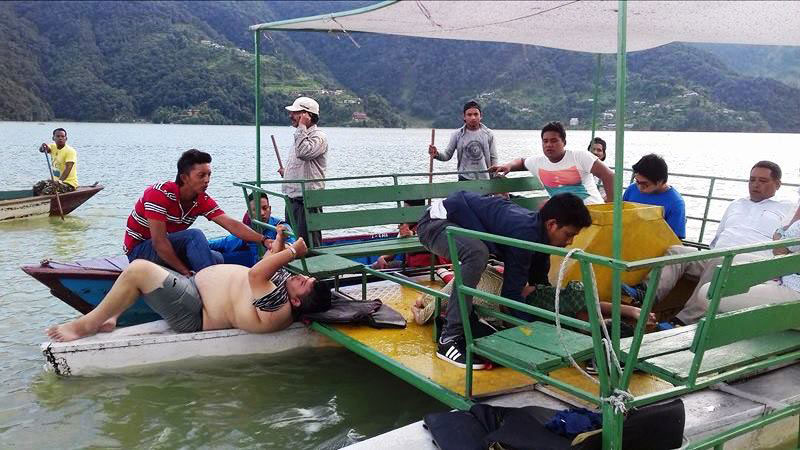 POKHARA, Aug 9: Two youths went missing after a boat capsized in Fewa Lake on Monday. Six othrs were rescued. The missing youths Pratik Shrestha, 19, and Elan KC, 21, both from Kathmandu, were not wearing life jacket.

The boat that was carrying some eight persons had overturned in the middle of the lake.

Police inspector Mohanmani Adhikari at Baidam Police Post told Republica that the search for the missing youths was under way till late evening on Monday.

According to him, six others were rescued and rushed to Gandaki Medical College for treatment.

Although the local entrepreneurs have made it mandatory to wear life jackets during boating in Fewa Lake, the rule is sometimes ignored. "If they were wearing life jackets, they would have been easily rescued," said a life guard. He said there were eight persons in the boat while its capacity was only for six. "The entrepreneurs often put passengers more than the boat’s capacity,” said the security man.

POKHARA, Aug 9: The whereabouts of the two youths missing in Fewa Lake since Monday afternoon is still unknown. The... Read More...

A boat carrying as many as 150 people has capsized off the northern coast of Cyprus, a Turkish Cypriot official... Read More...

POKHARA, Aug 11: Police on Thursday morning recovered bodies of the two youths who had gone missing when their boat... Read More...