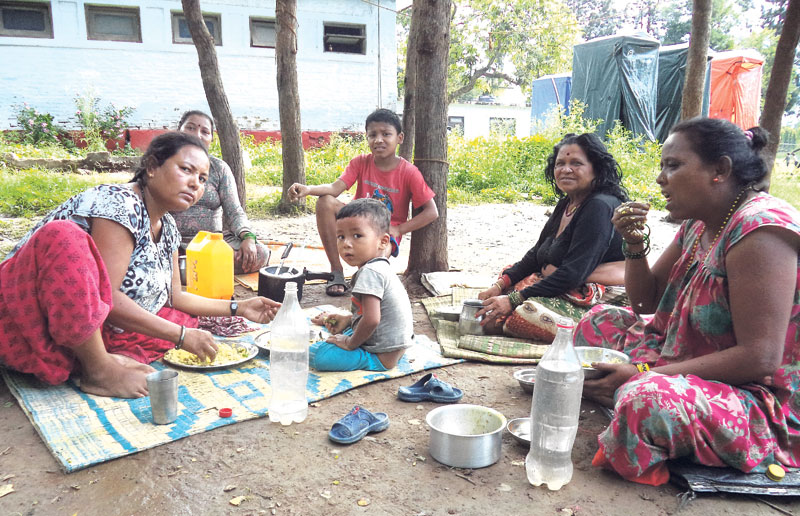 A Surkhet flood victim shows her temporary shelter that has been housing her family since being rendered homeless by the flood in August, 2014.(Nagendra Updhyaya)

SURKHET, July 4: Dhankumari Khatri’s life was simply normal and happy until two years ago. She would work harder to ensure better future of her children.  Life, however, had different plan for her. A devastating landslide on 13 August, 2014 swept away Khatri’s house and land in the flash of seconds. Since then, Khatri’s family has taken shelter in a camp near the riverbank and continues to live in deplorable condition to these days.

“Who would love to leave one’s house and comfort? Living like a helpless is nobody’s choice. But I can do little about it, I lost my house and land to landslide,” lamented Khatri, who is even seen begging for food at Ratna Highway roadside that is just alongside the river. “We had our own land, where we could grow crops and vegetables. Now the land is lost,” she reported.

[A Surkhet flood victim family having day meal under tree shade in this recent picture. Recent rainfall has added to the woes of victim families as the shelters barely hold rain water from sipping in]

Khatri is one of the hundreds of families who were severely hit by the landslides then. In lack of proper shelter, they have been living in makeshift shelter since they were rendered homeless. Eight months after the landslides, the government announced to provide certain amount to the flood and landslide victims of Bardiya and Dang. The victims were told that they would get Rs 50,000 to buy land and Rs 75,000 to construct house. Though that was not a very big amount, the assurances had kindled hope in the victims and were hopeful that the support would definitely make a difference. “But the government only talked. Nothing has been given to us till now,” said Khatri.

Tulbahadur Nepali of Hariharipur stated that the amount could actually make huge difference to the victims. “With the aid I could work out ways to bring the land back into use. There would be something to start with,” he said.

Nepali had also lost his house and land to the flood and landslides. The victim, who has been living in Girighat near a jungle accused that “the government did not heed to woes of the poor and needy people like him.” “If the government would provide aid for land and building a house, I would rush the very moment to my own place. Living in jungle is full of perils,” he said.

There are 119 families in Girighat camps. These families are struggling to fulfill their daily needs meet and have been living poor shelters. Before rendered homeless and landless, these farmers earned their living mostly through farming. Among them, 24 families have however received Rs 25,000 as the first installment of the announced government aid.

The government had recorded 91 people as missing and 2329 as displaced due to the disaster. In Surkhet alone, 24 were found dead while the missing were also counted as dead later. The cabinet had recommended the Natural Disaster Rescue Committee, Surkhet division to provide certain amount to the affected families. Media covered the news and that soon spread among the victims.

“Applications requesting for releasing the aid amount are logged nowadays also. We receive at least five applications on an average day,” said Hitprasad Poudel, administrative officer at District Administration Office, Surkhet. “But as the center has not yet responded fully to earlier applications, all we can do is to turn them disappointed,” he added.

According to Poudel, tired of waiting for the government aid, many victims have already left the camp. “There were 2,329 people in the beginning. But now most of them abandoned the camp and have taken their family elsewhere. Some have been gone to India for earning,” he said

Last fiscal year, the government had released Rs 40.5 million for distributing to the affected families. But since the budget was released at the end of the fiscal year in July, the administration could not distribute it fully to the recipients, freezing almost half of it. Of the total, the administration distributed Rs 20.6 million among the victims. “The budget was released at the last minute and we could not distribute it all to the victims, ultimately freezing the remaining budget,” Poudel said.

Acting Chief of the division office, Pradeep Kumar Singh said that the center has been very apathetic towards the concerns raised by them time and again. “We have written numerous correspondences on the issue to the center. But we get no response,” Singh said. “If the budget is released only at the last moment, there is little we can do in distributing it to the victims.”

Considering the long time frame that the government has taken to respond to their woes, the victims feel that the government has been apathetic towards their plight. According to Lalit Shahi, vice president of the flood victim struggle committee, Surkhet, the government’s apathy is the reason why hundreds of families are still suffering beyond words. “If the said amount was availed on time, many of us would have a better life than what we are forced to lead nowadays. Due to the negligence, many displaced became hopeless and have been forced to go India,” he remarked.

KATHMANDU, June 6: Although 13 years have passed since then rebels CPN Maoist bombed a public passenger bus at Badarmude... Read More...

PYUTHAN, July 28: The flood and landslide victims have not received relief materials in the district over procrastination of the... Read More...