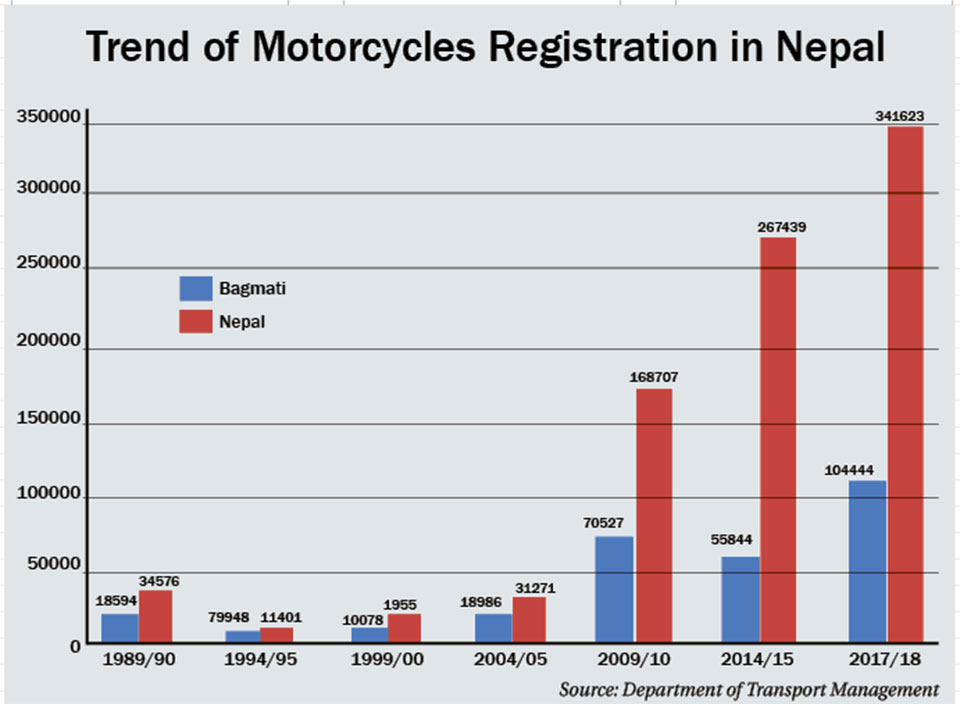 KATHMANDU, March 9: Though motorcycles occupy about 78% of space on the roads in Nepal, the government has no plan to introduce pollution test for them.

The Guardian reported that, according to a study based in the UK, the yearly hydrocarbon emissions of the average two-wheeler in urban traffic measured up to 49 times higher than that of the average car.

Likewise, Susan Carpenter lays it all out in a Los Angeles Times column. She found that, although motorcycles and scooters comprise 3.6 percent of registered vehicles in California and 1 percent of vehicle miles traveled, they account for 10 percent of passenger vehicles’ smog-forming emissions.

Motorbike is the most common and widely used vehicle in Nepal but there are no policies or even plans for checking its pollution scale yet. There are a total of 3,221,042 vehicles registered in Nepal since 1990 while registration of the total number of motorcycles during the period stands at 2,534,722, according to the Department of Transport Management (DoTM).

The vehicle emission test was introduced in April 2018. Likewise, on July 17 last year, the government brought a plan to restrict all vehicles except two-wheelers, failing their pollution tests from entering the Kathmandu Valley. In an attempt to curb pollution from four-wheel vehicles, the DoTM imported 40 pollution testing equipment sets.

“Due to a large number of motorbikes in the country, it is quite difficult to plan for checking their pollution scale individually,” said Gokarna Prasad Upadhaya, spokesperson for DoTM. “The DoTM hasn’t thought of conducting pollution test of the two-wheelers yet,” he added.

Environmental Engineer Bhushan Tuladhar said that it is hard to expect a pollution test for two-wheelers when the government has failed to control emissions by four-wheel vehicles.

Tuladhar also stated that the motorbike workshops could also take the responsibility of testing the pollution level and giving green stickers to them. This will make easier for the government to control the vehicle emission.

Tuladhar further said that, although motorcycles release less carbon emission in comparison to four-wheel vehicles, in Nepal there are far more motorbikes than four-wheelers. So, they release more harmful gases in the environment which has been adversely affecting public health.

The increasing number of two-wheelers has also increased environment pollution.

According to a whitepaper issued in April by the Ministry of Forests and Environment, vehicle emission is responsible for 37 percent of air pollution in the country. As many as 35,000 people lose their lives due to air pollution in Nepal every year, according to reports.

Air pollution alleviation plan to be implemented in Capital

‘Air pollution killing double of what tobacco kills in Kathmandu’

A medical doctor and epidemiologist (MD-PhD) by training, Dr Carlos Dora, has a distinguished career in public health and environmental... Read More...