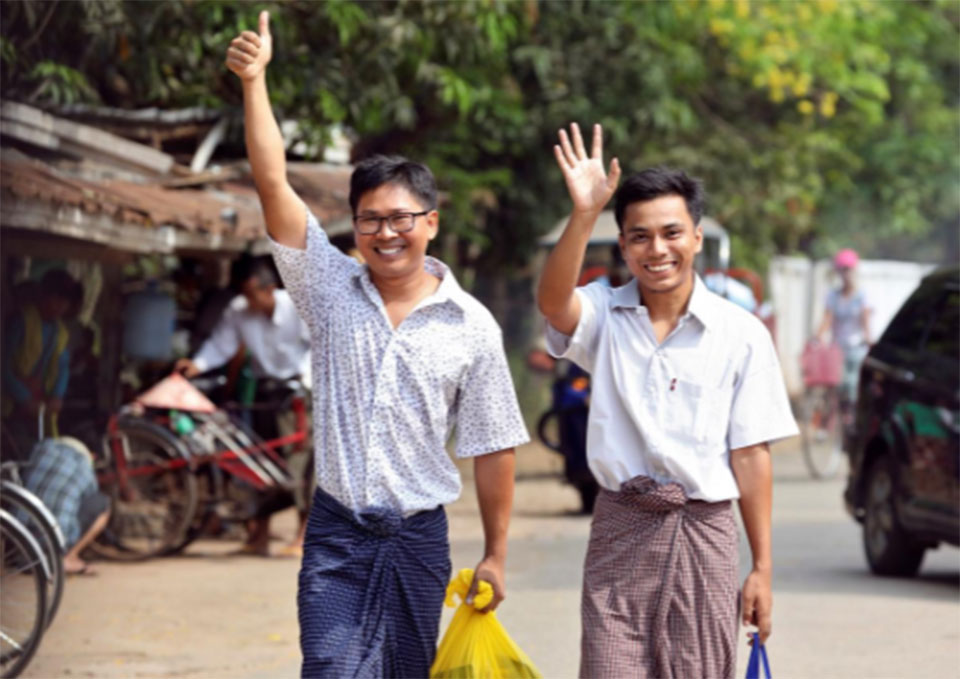 YANGON, May 7: Two Reuters journalists jailed in Myanmar after they were convicted of breaking the Official Secrets Act walked free from a prison on the outskirts of Yangon on Tuesday after spending more than 500 days behind bars.

The two reporters, Wa Lone, 33, and Kyaw Soe Oo, 29, had been convicted in September and sentenced to seven years in jail, in a case that raised questions about Myanmar’s progress toward democracy and sparked an outcry from diplomats and human rights advocates.

They were released under a presidential amnesty for 6,520 prisoners on Tuesday. President Win Myint has pardoned thousands of other prisoners in mass amnesties since last month.

It is customary in Myanmar for authorities to free prisoners across the country around the time of the traditional New Year, which began on April 17.

Reuters has said the two men did not commit any crime and had called for their release.

Swamped by media and well-wishers as they walked through the gates of Insein Prison, a grinning Wa Lone gave a thumbs up and said he was grateful for the international efforts to secure their freedom.

“I’m really happy and excited to see my family and my colleagues. I can’t wait to go to my newsroom,” he said.

Kyaw Soe Oo smiled and waved to reporters. The two were then driven away by Reuters colleagues.

Before their arrest in December 2017, they had been working on an investigation into the killing of 10 Rohingya Muslim men and boys by security forces and Buddhist civilians in western Myanmar’s Rakhine State during an army crackdown that began in August 2017.

The operation sent more than 730,000 Rohingya fleeing to Bangladesh, according to U.N. estimates.

The report the two men authored, featuring testimony from perpetrators, witnesses and families of the victims, was awarded the Pulitzer Prize for international reporting in May, adding to a number of accolades received by the pair for their journalism. (reut.rs/2KFTSgQ) (reut.rs/2M5benE)

Calls to a spokesman for the Myanmar government were not immediately answered.

“We are enormously pleased that Myanmar has released our courageous reporters, Wa Lone and Kyaw Soe Oo. Since their arrests 511 days ago, they have become symbols of the importance of press freedom around the world. We welcome their return,” Adler said.

U.N. Secretary-General Antonio Guterres was he was relieved to learn of the release, a spokesman said. The United Nations in Myanmar said it saw the release as a sign of the government’s commitment to the transition to democracy.

The U.S. embassy also welcomed the release and said it was glad the two could return to their families.

‘DIALOGUE WORKS’
Myanmar’s Supreme Court had rejected the journalists’ final appeal in April. They had petitioned the country’s top court, citing evidence of a police set-up and lack of proof of a crime, after the Yangon High Court dismissed an earlier appeal in January.

The reporters’ wives wrote a letter to the government in April pleading for a pardon, not, they said, because their husbands had done anything wrong, but because it would allow them to be released from prison and reunited with their families.

The Reuters journalists were released at the prison to representatives of Reuters and to Lord Ara Darzi, a British surgeon and health care expert who has served as a member of an advisory group to Myanmar’s government on reforms in Rakhine State.

“This outcome shows that dialogue works, even in the most difficult of circumstances,” Darzi said in a statement.

Darzi said discussions about the pardon for Wa Lone and Kyaw Soe Oo had involved the Myanmar government, Reuters, the United Nations and representatives of other governments but did not provide more details.

A Reuters spokesman said: “We are grateful for his role in making this happen.”

Darzi has been a member of an advisory commission that was formed in 2016 to see through the advice from a panel headed by former U.N. chief Kofi Annan on solving the long-running conflict in western Myanmar’s Rakhine State.

On the Bay of Bengal, the state was the home to most Rohingya Muslims in Myanmar. Hundreds of thousands fled to Bangladesh after a military-led crackdown on the region in 2017.