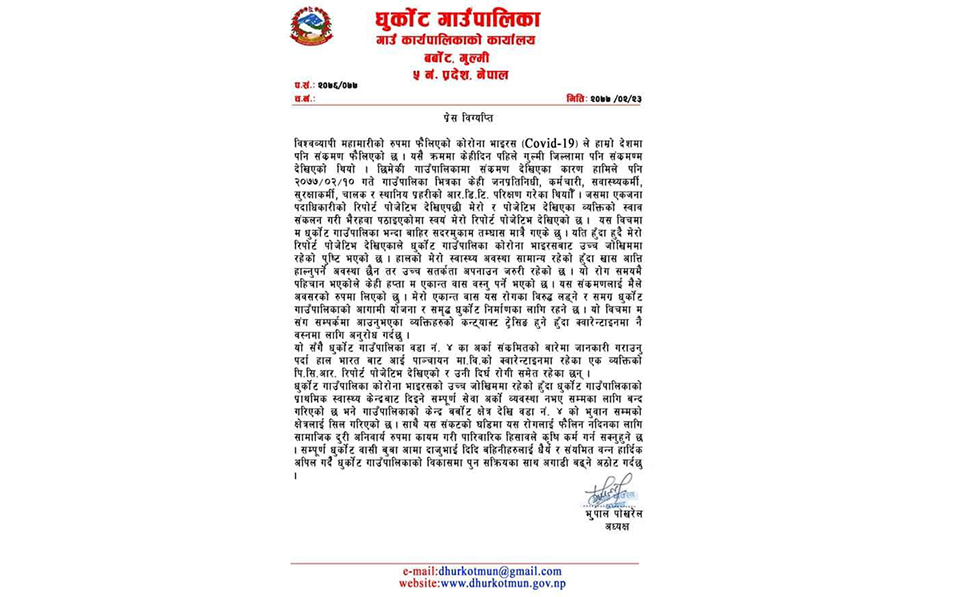 GULMI, May 26: Two more persons tested positive for COVID-19 in Gulmi district. With this, the total number of the people infected by this fatal disease has reached four in the district.

The two newly-confirmed cases include two residents from Dhurkot Rural Municipality of the district-- a male and a female. One of them is Bhupal Pokhrel, chairman of the rural municipality while the other is a female from Ward 4.

Issuing a press statement earlier today, Chairman Pokhrel said that they [he and the other patient] were diagnosed with this disease at the lab tests conducted at the Bhairahawa-based provincial lab. Another infected is an India-returnee who is also learnt to be a chronic patient, according to Pokhrel.

“I am planning to utilize my isolation-stay to plan for the development of my rural municipality,” he said in his statement.

Following the infection, the areas from Barbot, where rural municipality centre lies, to Bhuban of Ward 4 have been sealed off.

Gulmi has also reported a death case due to COVID-19. A 41-year-old man from Madane Rural Municipality died earlier on May 21 at the Rupandehi, Manigram-based Crimson Hospital.

Renting room a big challenge for Dalits in Gulmi

GULMI, June 12: The law has criminalized caste-based discrimination and the practice of untouchability. ... Read More...