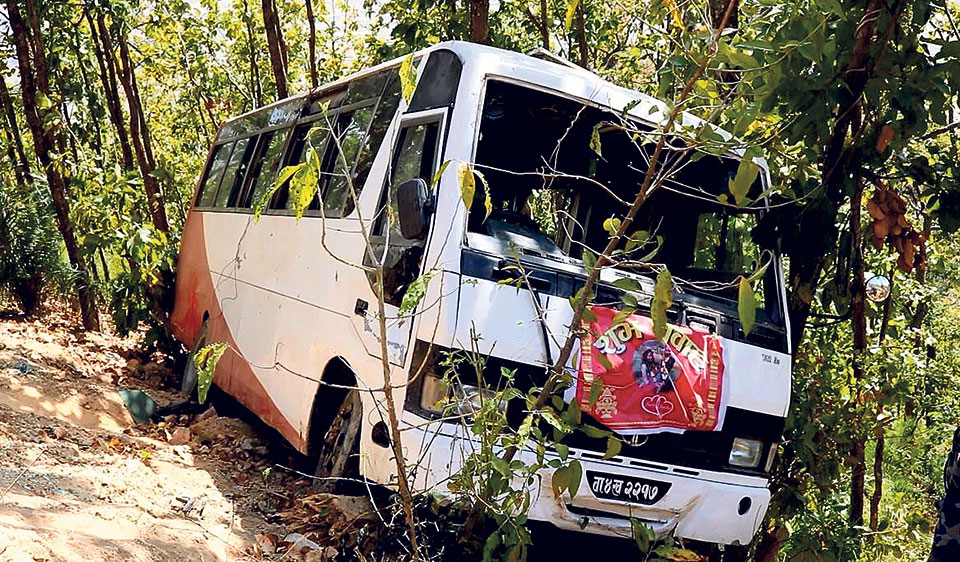 The wedding party bus after the accident on Tuesday. Photo: Republica

MAKWANPUR, March 13: Two people died and 22 others were injured when a bus carrying wedding attendants fell off a cliff at Dharampani in Makwanpurgadhi Rural Municipality-2 on Tuesday. Overspeeding has been blamed for the accident.

The ill-fated bus (Ba 4 Kha 2217) en route to Hetauda from Bhaktapur was carrying 28 wedding guests when it met with an accident in the newly-blacktopped Kanti Highway at Dharampani. The deceased have been identified as Nawaraj Pariyar, 35 of Kavrepalanchowk, Lamidanda and Bikash Dhamala, 25 of Nuwakot who currently lived in Balaju, according to Yagya Prasad Bhattarai, police Inspector as well as the spokesperson of Makwanpur District Police Office.

Inspector Bhattarai informed Republica that the bus had fallen off the road and landed on a tree 20 meters from the road. The accident took place at around 2 pm. After departing from the home of groom Surya Prasad Neupane, the bus carrying the wedding party was heading toward the bride's h0me at Piple in Hetauda-5.

There were two more buses carrying the wedding party. Those injured in the accident have said the bus in high speed and the driver lost control of the vehicle at a bend.

Kumar Pariyar, who sustained minor injuries in the accident, said, "Our bus was trailing the two other buses. We were having fun," said Pariyar, adding," Suddenly at a bend, the bus went out of control and fell off the cliff."

Arun Nepal, Minister for Industry, Forest and Tourism in Province 3 stated that the accident has left everyone grief-stricken. He claimed that the ministry has urged hospitals to provide proper care of the injured.

In another accident, two people died when a tractor met with an accident in Salyan district on Monday night. The ill-fated tractor (Rs 1 Ta 1151) heading toward Lanit Bazaar from Sharada Municipality had plunged into a river. The deceased have been identified as Krishna Dangi, 24, and Amar Budhathoki, 13, of Sharada-12, according to District Police Office (DPO), Salyan. Both died while undergoing treatment. Police are investigating the reason behind the accident.

RAUTAHAT, June 25: Two detainees have been killed leaving eight injured in a police van accident in the district on... Read More...

PM Oli's remarks on Ayodhya not linked to any political subject and have no intention at all to hurt anyone’s sentiments: Foreign Ministry
38 minutes ago