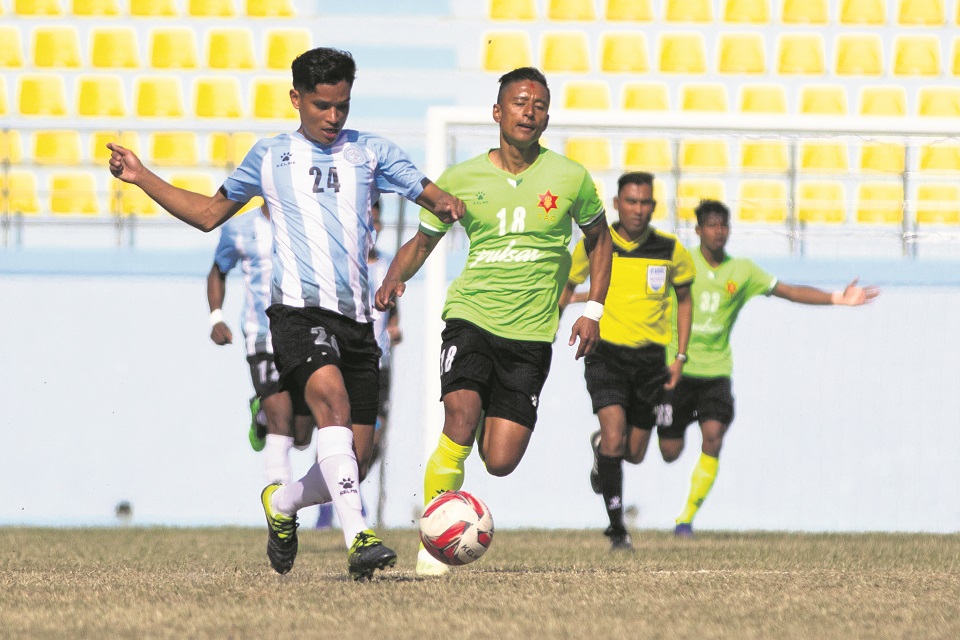 The match was scheduled to be played at the All Nepal Football Association (ANFA) Complex, but was later shifted to the Dasharath Stadium as the Nepal U-15 girls’ team was playing against Bhutan in Lalitpur.

In a tightly-contested early kick-off, a superb late goal from Daya Nanda Singh ensured the win for Manang.

Despite the win, title favorite Manang looked a bit off-color who played with pragmatism allowing Army the privilege to create a lot of chances. However, both the teams got enough chances to threaten each other, but failed to score goals.

Army controlled the possession at some point in the game, but the poor finishing was evident as forwards George Prince Karki and Bharat Khawas missed a series of opportunities to hurt the Manang side, who had fielded only one national player, Bimal Rana.

Manang has been struggling with its performances of late. But the team was solid at the back clearing out the Army shots and also helping the team present a counter attacking threat.

The league holder clinched the win when Daya Nanda Singh scored a brilliant rebound for its second straight win. Singh scored a goal in the 92nd minute after Bimal Rana hit a shot and was saved by Army keeper Bikesh Kuthu.

Kuthu could not gather the ball properly, and a lack of combination between him and his defenders saw Singh pounce on and score Manang’s third goal of the season.

The teams failed to break the deadlock in the first half. Playing with several national players, Army played attacking football from the first whistle but was agonized missing the chances it created.  Manang had more of the same problem, but it had little to offer when it was with the ball. It eventually found its rhythm in the dying minutes of the game, and its persistence finally paid off with a superb Singh goal three minutes from time.

Suman Aryal was shown a second yellow card in the last minute of the match after he was found guilty of controlling the ball with his hand.

Army came to the match with an aim to beat a relatively weak Manang side, who was missing some national players who left the club to join Machhindra Club, along with the suspended Anjan Bista.

Army got chances after chances in the early part of the first-half as George Prince gave a cross from the right side of the penalty box in the 14th minute, but the other Army players could not head it.

Aryal headed a ball from the danger box, but the ball went off the target in the 23rd minute.

Army quickly changed its gear again as captain Bharat Khawas produced a cross inside the box, but the header from Nawayug Shrestha was off target in the 34th minute.

The teams could not continue their first-half brilliance and had to settle for a 0-0 draw come the second half.

With the result, Manang is at the top of the table with six points from two games and yet to concede a goal, while Army is sixth with three points.

Manang had defeated the other departmental team Armed Police Force (APF) Club 2-0 in the first round, while Army saw off Friends Club 2-1.

In the other game played later on the same day, Three Star Club registered its first win of the season defeating the departmental team Nepal Police Club 1-0.

A goal from Sushil Rai six minutes from time sealed a win for Three Star as it managed to overcome the first game mediocrity against Jawalakhel Youth Club.  Three Star opted for attacking tactics from the start, while Police was looking for counter attack.

With this, Three Star is now third with four points from two games and yet to concede, while Police has one point from the same number of games after it was held to a 1-1 draw by Himalayan Sherpa Club.