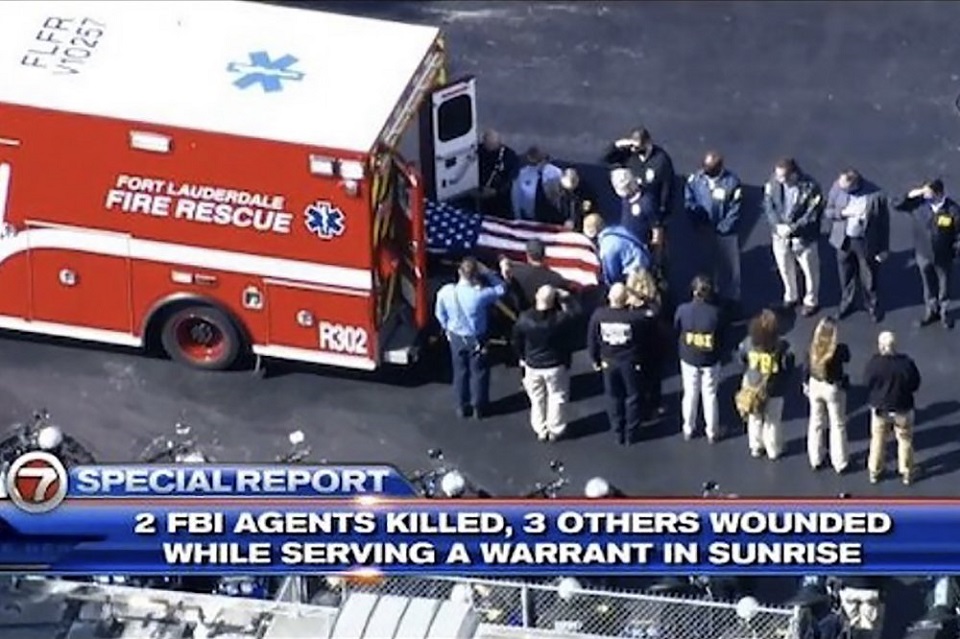 Law enforcement officers load a casket into a vehicle, Tuesday, Feb. 2, 2021, in Sunrise, Fla. Two FBI agents were fatally shot and three wounded while trying to serve a search warrant in Florida on Tuesday, prompting a SWAT team to storm an apartment building where the suspect was holed up as neighbors huddled inside their homes. (WSVN-TV via AP)

WASHINGTON, Feb 3: Two FBI agents were killed early on Tuesday and three others were wounded while trying to serve a search warrant at a Florida home, an encounter that turned into one of the federal law enforcement agency’s bloodiest in decades.

As a team of law enforcement officers tried to execute the court-ordered warrant involving violent crimes against children at the home in Sunrise, Florida, shots were fired at 6 a.m. EST (1100 GMT), the FBI said in a statement.

The search warrant sought evidence in connection with suspected possession of child pornography, the FBI Agents Association added in a statement.

Two of the wounded agents were in stable condition at a hospital, while the third did not require hospitalization, the FBI said. The subject of the warrant, who was not identified, also died, it said.

The man being investigated had apparently barricaded himself inside an apartment complex and was found dead, the New York Times reported, citing unidentified officials. It was unclear how he died, the newspaper said.

The scene on Tuesday morning near the home in Sunrise, just west of Fort Lauderdale and about 30 miles (48 km) north of Miami, was swarming with emergency and law enforcement vehicles from the FBI and police in Sunrise and surrounding jurisdictions.

White House press secretary Jen Psaki told reporters that President Joe Biden had been briefed on the incident and would likely address it later on Tuesday.

FBI Director Christopher Wray identified the dead agents as Daniel Alfin and Laura Schwartzenberger and hailed them as heroes.

“Special Agent Alfin and Special Agent Schwartzenberger exemplified heroism today in defense of their country,” Wray said in a statement. “The FBI will always honor their ultimate sacrifice and will be forever grateful for their bravery.”

The shooting deaths, which remain under investigation, were among the bloodiest episodes for the FBI.

In 1994, two agents were shot dead along with a police detective at the Washington, D.C., police headquarters when a homicide suspect opened fire on them with an assault weapon, also wounding a third agent, according to the FBI’s website.

Another deadly encounter occurred in 1986, also in Florida, when two agents were killed and five others were wounded in a Miami shootout with two bank robbery suspects, the FBI said.

The last fatal shooting of an FBI agent on duty was on Nov. 19, 2008, which also unfolded during the execution of a warrant, the FBI said. Agent Samuel Hicks was shot and killed as he sought to execute a federal arrest warrant associated with a drug trafficking organization in Pittsburgh, it said.