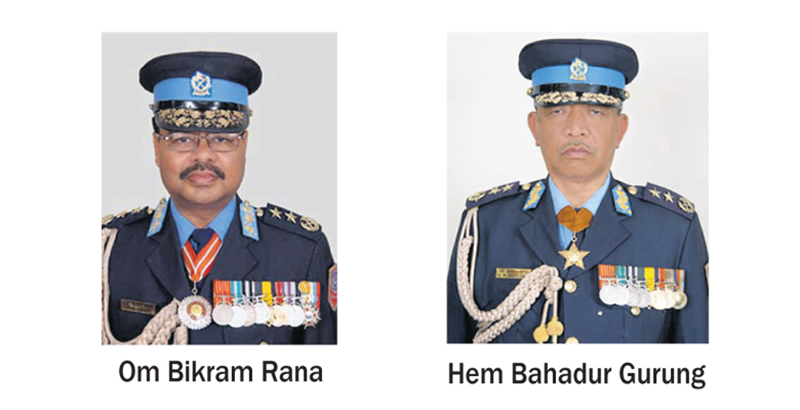 Sudan APC Scam
KATHMANDU, June 21: Two of the three former chiefs of the Nepal Police who were convicted by the Supreme Court in the high-profile Sudan APC scam have surrendered to the court on Wednesday. They were subsequently sent to jail.

The court had declared two years jail term for three former IGPs Om Bikram Rana, Hem Bahadur Gurung and Ramesh Chanda Thakuri on the case on April 30. The then Chief Justice Sushil Karki had issued the final verdict on the much awaited case a month before retiring from the post.

Rana and Gurung appeared before the court on Wednesday along with AIG Deepak Singh Thangden and DIG Deepak Shrestha to serve the sentence. But former IGP Thakuri is still absconding.

The court had handed down two years jail and a fine of Rs 50,000 to former IGP Rana; and fine of Rs 40,000 each to former IGPs Gurung and Thakuri and former AIG Deepak Singh Thangden and DIG Shyam Singh Thapa in the multi-million dollar corruption case.

The apex court had sentenced DIGs Ravi Pratap Rana and Deepak Kumar Shrestha to 6 months and Rs 30,000 fine each. Several other Nepal Police officials were declared guilty of corruption in the purchase of logistics for Nepali UN peacekeeping force deployed in Darfur, Sudan.

Supreme Court spokesperson Mahendra Nath Upadhyaya said that they will get 20 percent commutation in their jail terms and fines as per the law. "They have been sent to Dillibazar jail," Upadhyaya said on Wednesday.

Sudan scam is one of the biggest corruption scandals to hit the country where at least 34 police officials including two retired and one sitting police chief, and two suppliers were implicated in the embezzlement of Rs 290 million out of the total transaction of Rs 445 million. Among others, the officials are accused of irregularities in the purchase of obsolete armored personnel carriers (APCs) and pocketing the remaining funds.

The apex court has acquitted Michel Rider of the Assured Risk Private Limited, the main agent, and Sambhu Bharati, proprietor of Bharati Traders, a local agent of the supplier, of the charges.

KATHMANDU, Nov 30: The Constitutional Bench of the Supreme Court issued a show cause notice to government authorities today, demanding the... Read More...

KATHMANDU, Nov 21: Special Court has demanded Rs 10 million each in bail from the chief of Tax Settlement Commission... Read More...