Two culprits involved in exploding bombs at schools made public 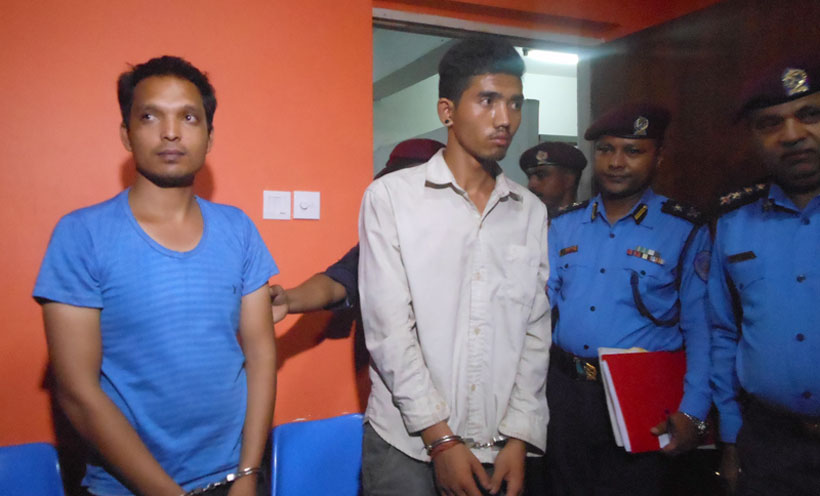 KATHMANDU, Sept 20: Police, this evening, made public a group accused of exploding bombs at different schools in the Kathmandu Valley on Tuesday morning. They were involved in organized crimes in the name of political party, according to the police.

During a press conference, the police paraded Shankar Lakhe from Dimapokhari, Ramechhap and Chandra Bahadur Tamang from Lampangtar, Sindhuli.

At the conference, Additional Inspector General of Police, Pratap Singh Thapa, said they were found affiliated to the Communist Centre (Maoist), All Nepal Independent Students' Centre and Young Communist Force.

Eight along with these two were arrested by the police two months back for committing arson on a van of Ideal Model School, Dallu, and a case filed on arson. Later they were released on general bail from Kathmandu District Court.

Mastermind behind the bombing is coordinator of the Student's Centre Min Devkota and coordinator of Young Communist Force Suman Shrestha, police said.

The party was formed by the combatants who fled with weapons before then CPN (Maoist) joined the peace process.

It was also learnt that the Centre, carrying out lawlessness in the name of the party, had held talks with government in 2069 BS and surrendered the arms to the government two years later. Search for others involved in the bomb blast is continued.

They had allegedly exploded cylinder bomb at Akashdeep Boarding School and Manakamana Higher Secondary School of Bouddha at about 4:00am.

Similarly, they had allegedly planted suspicious things at Ambassador School, East Pole School and Rai School of Narayantar; Balsanchar School of Bouddha, and Kanchenjungha School of Dallu and Radiat Readers School of Sanepa.

The bombs were defused. However, some were only hoax. RSS

Accused in death of woman from gang rape made public

BANEPA, Sept 6: The accused in the murder of a woman due to gang rape a week ago were presented... Read More...

Six involved in planting bombs in capital arrested so far