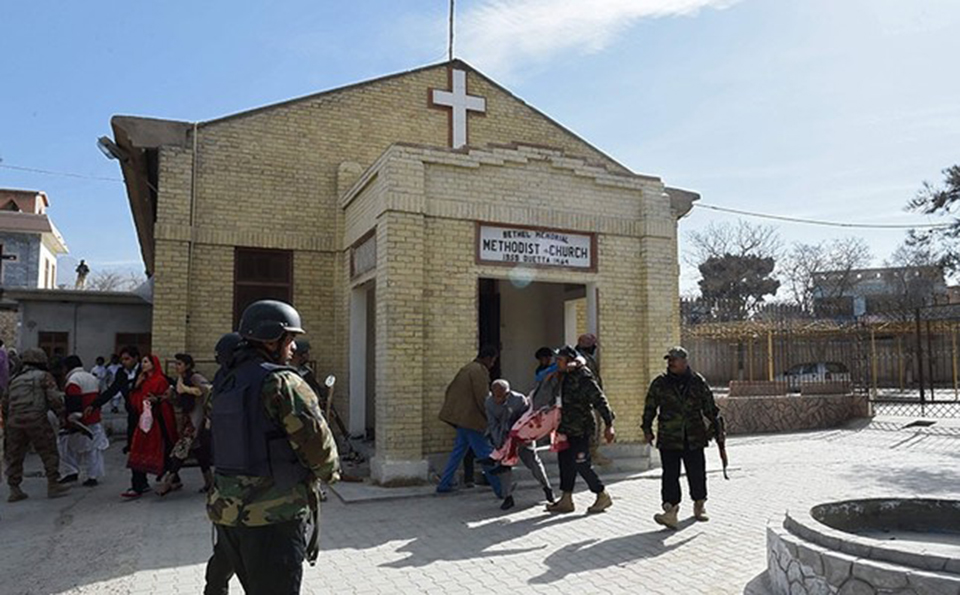 QUETTA, Dec 17: Two suicide bombers attacked a packed Catholic church in southwestern Pakistan on Sunday, killing at least eight people and wounding up to 45 before one of them blew himself up and police killed the other, officials said.

The gunmen wearing explosives-filled vests stormed the church in Quetta city when Sunday services had just opened, exploding a suicide vest and shooting at the Christian worshippers, said Sarfraz Bugti, the home minister of Baluchistan province.

Police guards at the church exchanged fire with the attackers before they could enter the main sanctuary, said provincial police chief Moazzam Jah. He said two women were among those killed.

“There were nearly 400 people inside the church, but the attackers couldn’t get inside the services,” Jah said. “We killed one of them, and the other one exploded himself after police wounded him,” he said.

Jah said the venue - Bethel Memorial Methodist Church - was on high alert as Christian places of worship were often targeted by Islamist extremist over Christmas.

No one has claimed responsibility.

Baluchistan has long been the scene of an insurgency by separatists fighting against the state to demand more of a share of the gas- and mineral-rich region’s resources. They also accuse the central government of discrimination.

The Taliban, Sunni Islamist militants and sectarian groups linked to al Qaeda and the Islamic State group also operate in the strategically important region, which borders Iran as well as Afghanistan.

The violence has fueled concern about security for projects in the $57 billion China Pakistan Economic Corridor, a transport and energy link planned to run from western China to Pakistan’s southern deep-water port of Gwadar.

Pakistan has launched several military offensives over the last decade against the Islamist militants who want to install their own harsh brand of religion.

Efforts being made to bring the RSP back in govt: Minister Sharma
32 minutes ago