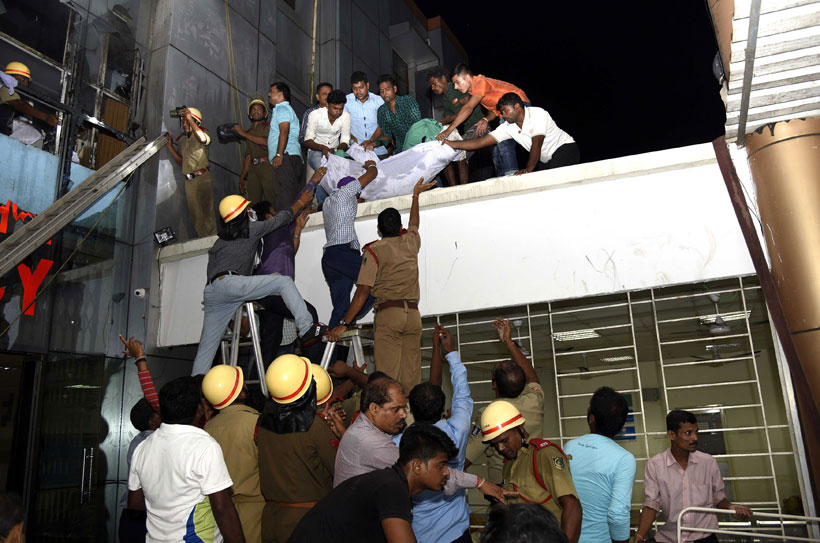 NEW DELHI, Oct 18: At least 22 people have been killed in two separate fires in India, most of them patients who were trapped in the intensive care unit of a major hospital, officials said Tuesday.

More than 40 critically ill patients were in the ICU of a private hospital in the eastern state of Odisha when fire broke out on Monday night, apparently after an electric short circuit.

Authorities said 19 people had died in the blaze, mostly from smoke inhalation.

More than 100 patients were rescued by firefighters who smashed windows to get them out of the burning building.

"Some patients were evacuated by breaking a window on the first floor and then they were lowered to the ground floor. And some of them were evacuated through the adjoining operation theatre which was empty at that time," said Odisha's health secretary Arti Ahuja.

"There are about 106 people who are (now) in different private and government hospitals," she told the NDTV news channel.

Firefighters said 11 people had to be rescued from the blaze and two died of asphyxiation after they became trapped in the stairwell. The cause of the fire was not immediately clear.

Such disasters are relatively common in India, partly because of poor safety standards.

Most died from inhaling toxic gases.

Ahuja said the hospital in Odisha had been sealed off and a detailed inquiry would be carried out to establish the cause of the disaster.

Sharat Kumar Sahu, a police officer at the site of the blaze, told AFP that the fire started in the dialysis ward in the four-storey building and quickly spread to the intensive care unit.

Sahu said more than 100 firefighters had battled the blaze for around five hours until it was brought under control.

Most of the critical patients were on ventilators and died in the blaze, he said.

The state's chief minister Naveen Patnaik said on Tuesday that he had visited the evacuated patients in hospital and ordered an inquiry into what he called a "tragic incident".

A government relief fund would bear the cost of their treatment, he said on Twitter.