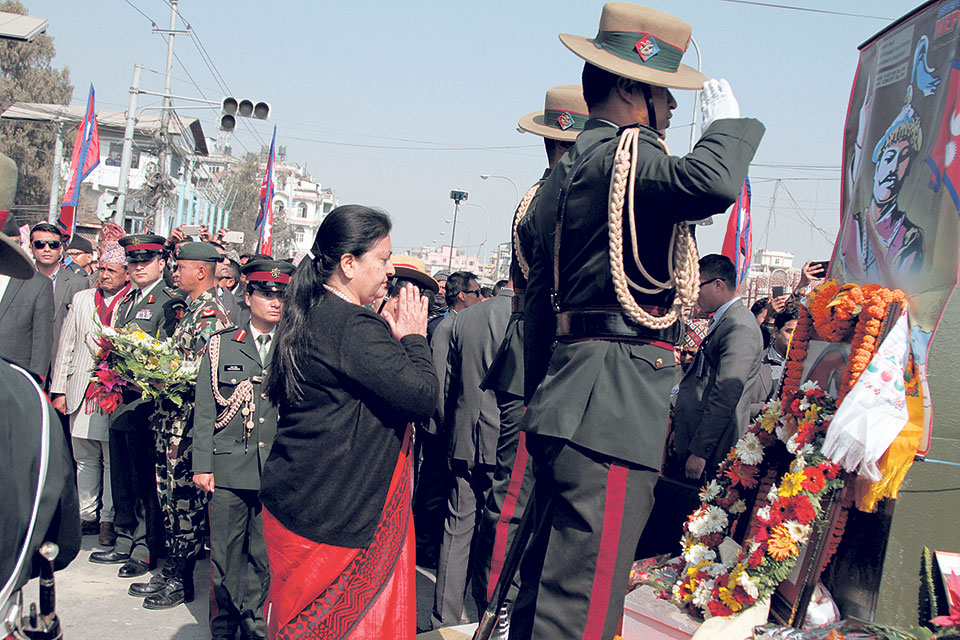 President Bidya Bhandari pays homage at the statue of King Prithvi Narayan Shah, the unifier of modern Nepal, on the king’s 296th birth anniversary on Thursday outside Singha Durbar in Kathmandu. The prime minister and other senior government officials also paid homage to the king. The government formed after the April 2006 movement had stopped celebrating the king’s birth anniversary, Prithvi Jayanti, but the current government resumed the celebration.

KATHMANDU, Jan 12: The decision taken by the current government to celebrate Prithvi Jayanti, the birth anniversary of the unifier of modern Nepal King Prithvi Narayan Shah as the National Unification Day has been met with mixed reactions on Twitter.

After a hiatus of a decade, Nepal on Thursday marked 296th Prithvi Jayanti by organizing various events across the country. In Kathmandu, President Bidya Devi Bhandari and Prime Minister Sher Bahadur Deuba among other top government officials observed the event by offering garlands to the statute of King Prthivi Narayan Shah.

The government had stopped celebrating Prithvi Jayanti after the political change of 2006. As the image of President Bhandari offering garland on Prithvi Narayan's statute started circulating in the media platform Thursday, it triggered a debate which became vocal after the abolition of the monarchy: Should King Prithvi Narayan be seen an architect of modern Nepal or a ruthless invader who imposed the language, culture and history of his people on another kingdom annexed by unforgiving Gorkhali Army?

Prithvi Narayan's legacy has long divided the country's intellectual circle and academia. Many see Shah as a visionary, an architect and unifier of modern Nepal, and argue that he rightly deserves the title of "the founder of nation". Others see him as an ambitious king who inflicted huge pain and sufferings in name of expanding his kingdom. Those critical of Prithvi Narayan's legacy have stressed that the history should be revisited with focus on brutalities inflicted by the victorious Gorkhali soldiers on the vanquished.

Many took to social media to criticize the government decision arguing that Prithvi Narayan's contribution should be looked at more critically.

"This state also belongs to those who lost to Gorakhyani. Banish the loser if you can (excluding Khas Pahade of mid and eastern Nepal) or let this farce of praising tomorrow's murderer be stopped," twitted one Dinesh Pant.

Some expressed their frustrations at the little space given to fallen soldiers who died during conquest while giving overt emphasis on the kings.

"Only emperors are praised and portrayed as conquers [conquerers]; common people, the real heroes who die, shade [shed] blood and take all the challenges are forgotten. This is the global trend of writing /reading imperialistic histories!," twitted Krishna Ghimire.

Others defended Shah's legacy, prasing the role he played in creating the nation. Even as they conceded torture and brutalities inflicted by the Gorkhali force on the people of the Malla Kingdom and historical injustice that followed, they stressed that Shah's role should be looked from the time period he lived.

"Prithvi Narayan Shah's decisive contribution in building Nepal as a nation is a historical fact. I express my respects and cordial tributes to him," twitted Nepali Congress leader Bimalendra Nidhi.

Perhaps no other public office-holder in Nepal has been as controversial as former CIAA Chief Lokman Singh Karki. A man... Read More...