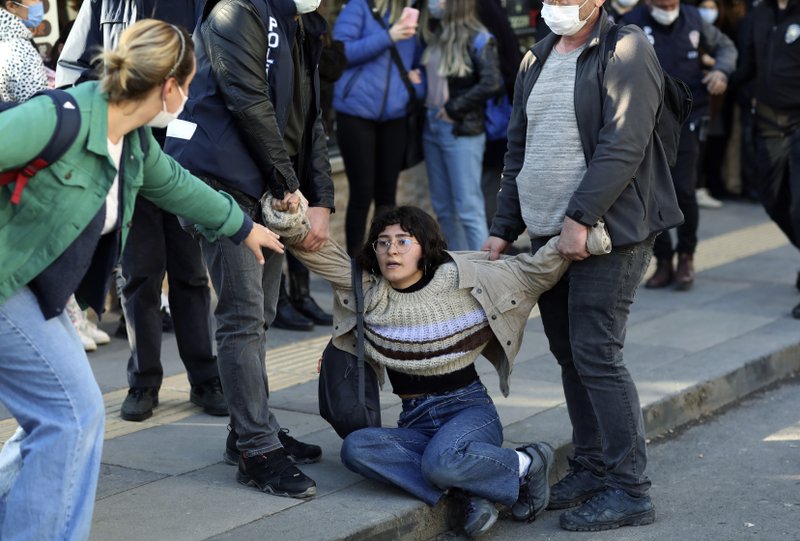 A woman reacts as riot police officers detain a student during a protest, in Ankara, Turkey, Friday, Feb. 5, 2021. Students and faculty members at Bogazici University have been staging demonstrations in protest of President Recep Tayyip Erdogan's Jan. 1 appointment of an academic with links to his ruling party, as rector.(AP Photo/Burhan Ozbilici)

ISTANBUL, Feb 6: Turkey’s president has ordered the establishment of two new departments in the country’s most prestigious university, which has been rocked by weeks of demonstrations protesting his appointment of a new rector with government links.

President Recep Tayyip Erdogan’s decision, published in the Official Gazette Saturday, says law and communications faculties are to be launched in Bogazici University. Critics say the establishment of new departments would allow the presidentially appointed rector to staff them with government loyalists.

For over a month, students and faculty have led mostly peaceful protests against the new rector, Melih Bulu, who has links to Erdogan’s ruling party. They are calling for Bulu’s resignation and for the university to be allowed to elect its own president.

In an open letter to Erdogan, protesting Bogazici students called the decision to open new departments intimidation and “petty tricks.”

“Your attempts to pack our university with your own political militants is the symptom of the political crisis you have fallen into,” the letter said.

Police have detained hundreds of demonstrators at the university and in solidarity protests elsewhere, some taken away following raids of their homes. Most were later released.

Officials from the United States, the United Nations and the European Union have criticized Turkey’s handling of the protests as well as a series of homophobic comments that were made by Erdogan and other officials while denouncing the demonstrations.

With the same order, the president opened new faculties in several universities, closed down some others and appointed 11 rectors elsewhere.

The students in their letter said they knew its publication would likely result in criminal complaints, including for insulting the president, but they vowed to continue speaking out and protesting.

HONG KONG, Nov 23: A Hong Kong university campus under siege for more than a week was a deserted wasteland... Read More...