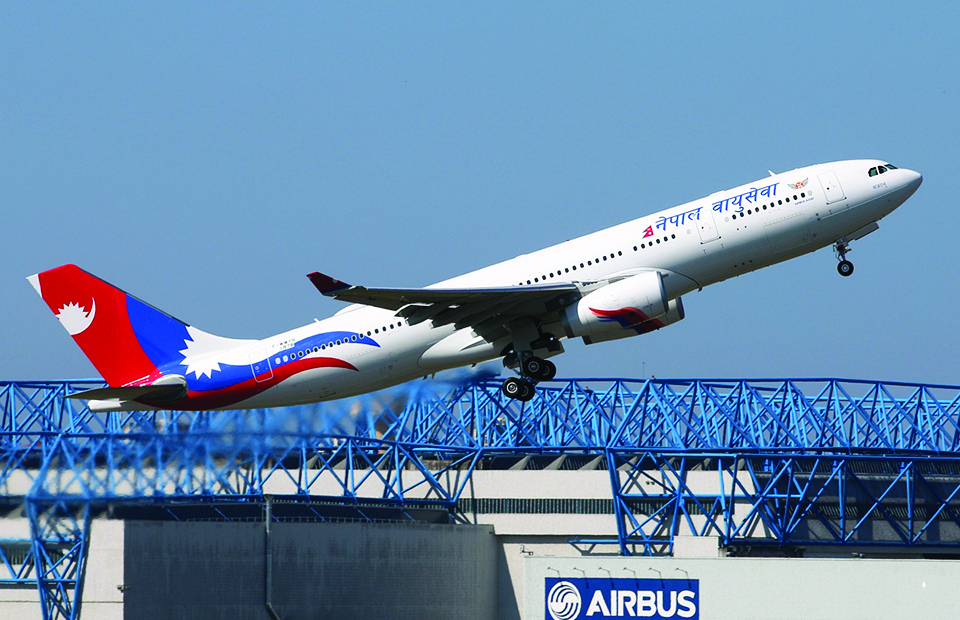 NAC’s business plan was premised on a flawed assumption of easy access to the proposed new destinations like Korea, Japan and China apart from Europe

The recent tongue-lashing that the Nepal Airlines Corporation (NAC) management received from none other than Prime Minister KP Oli on the 61st anniversary of the national flag carrier for its perceived incompetence speaks volumes on the state of affairs at the six-decades-old airline. On its trails, the Ministry of Culture, Tourism and Civil Aviation secretary reiterated the same thoughts at a hearing on NAC by the parliamentary committee on finance stating that the government is unlikely to bail NAC out of its financial crisis without abundant changes. Perhaps, the government is interested in inducing a foreign strategic partner for the loss-making enterprise with the hope of reversing its fortunes.

The NAC business plan, under which the then management pushed for wide-body aircraft purchase, clearly was premised on a flawed assumption of easy access to the proposed new destinations like Korea, Japan and China apart from Europe. Even these advanced Asian countries have rigorous checks before allowing foreign air carriers on to their shores. In fact, some of them even issue air operator certificates for foreign operators after a thorough audit process. Curiously, even to this date, the official website of Japan Civil Aviation Bureau does

not designate NAC on its list of foreign carriers listed under “Permission for International Air Transport Services by Foreign Nationals”—the latest entry to the list being Israeli El Al airline set to commence services on September 30, 2018.

In fact, the International Civil Aviation Organization (ICAO) regulations do authorize the Civil Aviation Authority of Nepal (CAN) to subject foreign air carriers to safety inspections, both before commencing operations as well as later unannounced inspections on the ramp from time to time. However, the frequency and extent of inspections of Chinese air carriers by CAAN air safety inspectors is not publicly available.

debt obligations incurred for purchasing the aircraft. This, however, begs the question as to why NAC management chose the outright purchase of the aircraft in the first place that would result in severely impaired liquidity over other options like lease purchase or even bare leasing. Though the NAC may claim the aircraft as fixed assets on its balance sheets, the truth is that they continue to depreciate with time. The airline’s financial mess continues to worsen as the

While avoiding a cold, hard look at traffic statistics available from International Air Transport Association (IATA) or Airbus for identifying suitable passenger movement trends before fleet induction has landed NAC in its liquidity soup, armed solely with Nepal’s traffic rights under bilateral air services agreements, it remains ill-equipped to contend with competing carriers with vast networks that are managed by the best aviation minds available in the market. No wonder, the other private-owned joint venture Himalayan Airlines is having a hard time as is evident from its leasing out of one of its jets to a Vietnamese carrier.

While Nepali carriers may draw succor from encouraging load factors on labor destinations as long as the manpower-export party lasts, getting a slice of the pie of long-distance and diverse destinations will remain a tall order, as many legacy carriers are having a hard time competing with new-kids-on the-block.

Interestingly, similar was the case of Air India, when it first inducted Dreamliners in 2012 that contributed to a cash flow crisis at the Indian flag carrier. The AI management then resorted to an industry measure, what is called sale-and-lease-back (SLB) of the aircraft, where the aircrafts were sold off to aircraft leasing companies and immediately leased back for up to 15 years without the aircraft leaving Indian shores. This did free up significant capital for other servicing pressing needs besides earning competitive lease rental rates. However, SLB option only made sense as AI was among the first carrier to induct the jets and therefore received better rates for

The Chinese aircraft types acquired by NAC are not known for their commercial success, despite the Y12e being touted as (Federal Aviation Administration) FAA type certificate compliant for safety. Despite being priced competitively for their class, they are not known to have any presence in Western markets. China, with its big geographical size, is efficiently served by regional jets from Bombardier and Embraer, apart from Boeing and Airbus aircraft while not many of its own MA-60 aircraft fly in China.

While the upcoming terrain-constrained Pokhara international airport being readied under Chinese assistance will not likely be of any use to NAC owing to operational limitations of its existing fleet, it might end up serving mostly Chinese carriers plying A319s to similar

airports in China. It is highly unlikely that Kathmandu or even the proposed Nijgarh airport would evolve into large aviation hubs any time soon that today support home carriers like Turkish, Qatar, Emirates or even Ethiopian by allowing parking space for hundreds of

aircraft apart from hosting aircraft repair as well as crew training facilities, for our aviation planners, continue to be handicapped with a limited horizon. Sadly, as evident from social media posting, they only seem content attending air services agreements and aviation conferences at official expenses while eyeing lucrative offices all the while shunning responsibility. With this backdrop, there is only turbulence ahead for NAC.

The author is a Fulbright alumnus in Aviation Safety Science from Embry-Riddle Aeronautical University, US