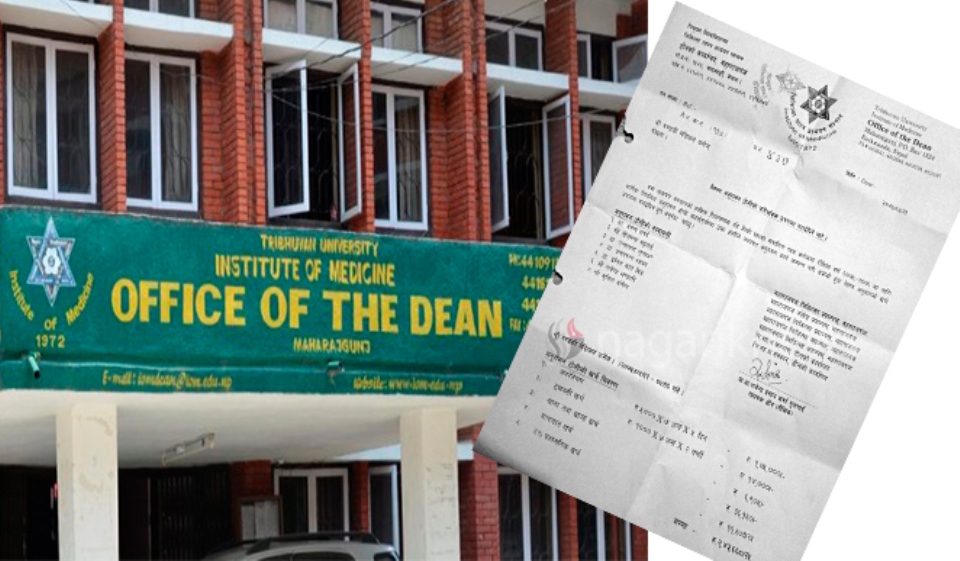 KATHMANDU, Nov 19: It has been found that the officials of Tribuvan University charge medical colleges even for their taxi fares and food and lodging expense when they visit these colleges for inspection.

Documents received by Republica show that TU officials have been charging as much as Rs 300,000 from a medical college each year in the name of allowances and other expenses involved in the visit of the college for monitoring purpose.

The Institute of Medicine under TU's Monitoring Directorate has been accused of being involved in collecting the money. This directorate, which has nine medical colleges affiliated to TU under its monitoring jurisdiction, is under the command of TU Vice Chancellor.

A letter sent by Deputy Dean of IOM Rajendra Prasad Sharma Guragain to Gandaki Medical College in Pokhara on September 6, 2018 shows that the college has been asked to provide Rs 5,000 a day to each member of the monitoring team as honorarium, Rs 14,000 as taxi fare, Rs 6,905 as refreshment allowance, Rs 36,160 as transportation cost and Rs 11,603 as other expenses.

In another letter sent to Universal Medical College in Bhairahwa on September 13, 2018, Deputy Dean Guragain is found to have asked the college to provide Rs 236,418 as allowance, taxi fare and other expenses to the monitoring team members. Sources said he had written to six other medical colleges, making similar requests to bear the expenses incurred by the monitoring team members.

Sources said IOM officials have been charging similarly to all nine medical colleges affiliated to it. While IOM at Maharajgunj is a constituent college of the TU, six other medical colleges have received affiliation from the TU.

It has been found that TU administration is aware of this practice of charging medical colleges with the expenses incurred by the monitoring teams.

TU officials concerned said they have already sent warning letters to the monitoring teams not to charge medical colleges for their expenses. But no one involved has been punished so far.

“This is not justifiable. We have already written to the concerned offices to stop this practice,” said Director at TU's Monitoring Directorate Bishnu Khanal, while stating that they are aware of such malpractices.

Asked if such officials would be punished, he said, “We inquired about this with them. They have told that they charged the expense after making a work procedure to this effect.”

A report prepared by the National Vigilance Center said the money received by monitoring team members from medical colleges is illegal. The body has also recommended action against the officials concerned as this does not ensure that they have properly monitored the medical colleges.

Sources claimed that the TU officials also charge medical colleges in the name other expenses each year. As such, the monitoring teams do not show any faults even as medical colleges may not have fulfilled necessary criteria or enrolled students more than the capacity approved by the TU.

KATHMANDU, July 15: The US immigration authorities have withdrawn a move to force international students to leave the country if... Read More...

PM Oli's remarks on Ayodhya not linked to any political subject and have no intention at all to hurt anyone’s sentiments: Foreign Ministry
20 minutes ago