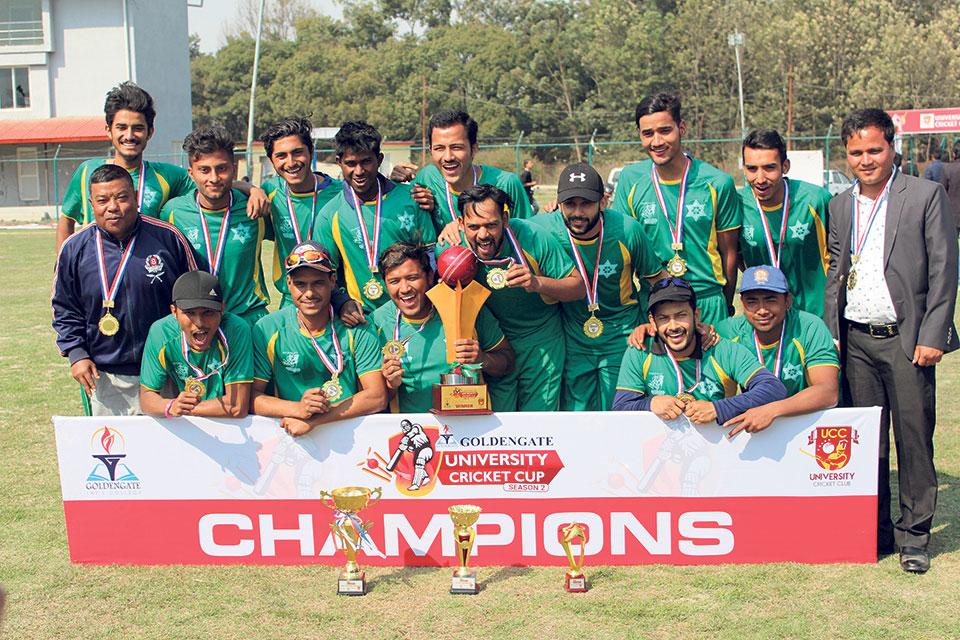 Players of Tribhuvan University pose with the trophy after winning the University Cricket Cup T20 Tournament at the TU Cricket Ground in Kirtipur on Saturday.

In reply, TU opener Rabin Joshi scored the highest 71 runs off 54 balls in the match that included six boundaries and two sixes. The other opener Pandey contributed 57 off 51 balls with eight fours. For DAV, Nandan Yadav and Dilip Yadav pocketed two wickets each.

TU’s Joshi was named the man-of-the-match.

With the win, TU took home Rs 200,000, while the runner-up DAV was rewarded with Rs 100,000.
TU’s Pandey was named the man of the series, while DAV’s Aadil Khan and TU’s Dhakal were prized with the best batsman and the best bowler awards respectively. Also, Mahesh Khatri was recognized as the emerging player. All the winners were prized with Rs 10,000 each.

Also, on the same occasion, the tournament committee honored the former national player and the first captain of TU Durga Nath Subedi.

Subedi said that the tournament was successful and that the most important aspect of the event was to provide exposure to the players.

“The most important thing is that the young players are getting exposure and the tournament provides competition for them,’’ Subedi said. “The T20 format of cricket is becoming popular in recent years in our country. But since we just have graduated to the ODI status, we should now focus on the 50-over format as that helps test our real strength.’’

He also added that the captaincy of a team from his time to now has changed slightly, but the basics of cricket has not changed.

“The captaincy from my time to now has become slightly different. Earlier, we didn’t have the busy schedule. We used to participate in less number of tournaments in comparison to the present scenario. But, the basics of cricket are same. Players get chances from this type of tournaments and the university cricket will also be developed over the time,’’ Subedi added.