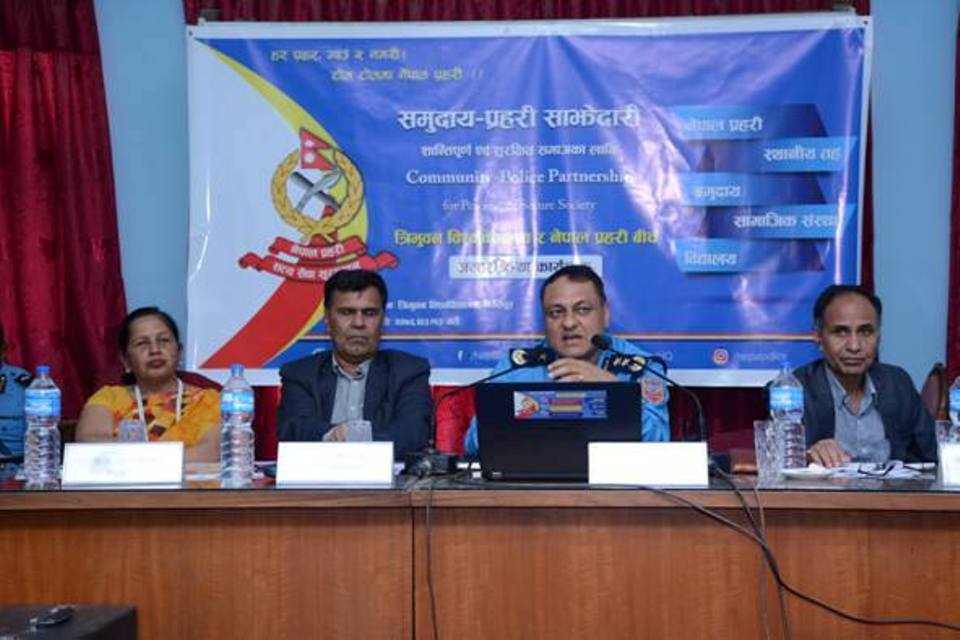 KATHMANDU, July 2: Nepal Police has started a partnership with the country's oldest university, Tribhuvan University, in conducting research on various types of emerging crimes in society as a part of its newly-launched Community Police Partnership (CPP) program.

Senior officials of Nepal Police including Inspector General Sarbendra Khanal recently held interaction with the office bearers including Vice Chancellor of Tribhuvan University Tirtha Khaniya to seek their suggestions as they are set to implement the CPP program with some innovative approach to bring all stakeholders on board the policing activities.  An understanding was reached between Nepal Police and Tribhuvan University to collaborate in various research works and in-depth study on various issues affecting peace and security.

On the occasion, Nepal Police Chief Khanal sought cooperation from Tribhuvan University as they are launching CPP with new approaches that are currently in practice around the world. He said that Nepal Police intends to deepen cooperation also with the academic sector as they launch the CPP program with primary focus on 12 priority areas.

The new CPP program was launched amid concerns that similar types of programs launched by Nepal Police in the past failed to ensure cooperation and coordination with all concerned stakeholders due to lack of permanent mechanisms in place. This was the first time Nepal Police held interaction with Tribhuvan University to seek its intellectual outputs.

Nepal Police has already started forming permanent mechanisms at the level of the center, district, municipality, ward and tole across the country in order to implement the CPP program. These committees are led by the elected chair of concerned local units as coordinators, while local police unit chief serves as member secretary.

Police Officials have already formed 77 Community Police District Committees, 747 municipal committees, and 6,182 tole committees. Among others, Nepal Police has formed School Liaison Committees in various 655 schools so far in order to take students on board the CPP programs.

Ensuring effective cooperation and coordination between police and local level government and installing CCTV cameras to control instances of crimes in the society are also among the priority areas identified as a part of the CPP program.

KATHMANDU, Dec 28: After many years of trial and error, Nepal Police has finally figured out a way to make... Read More...

KATHMANDU, July 18: Tribhuvan University and Nepal Police have reached an understanding to utilize the knowledge and expertise of academic sector... Read More...