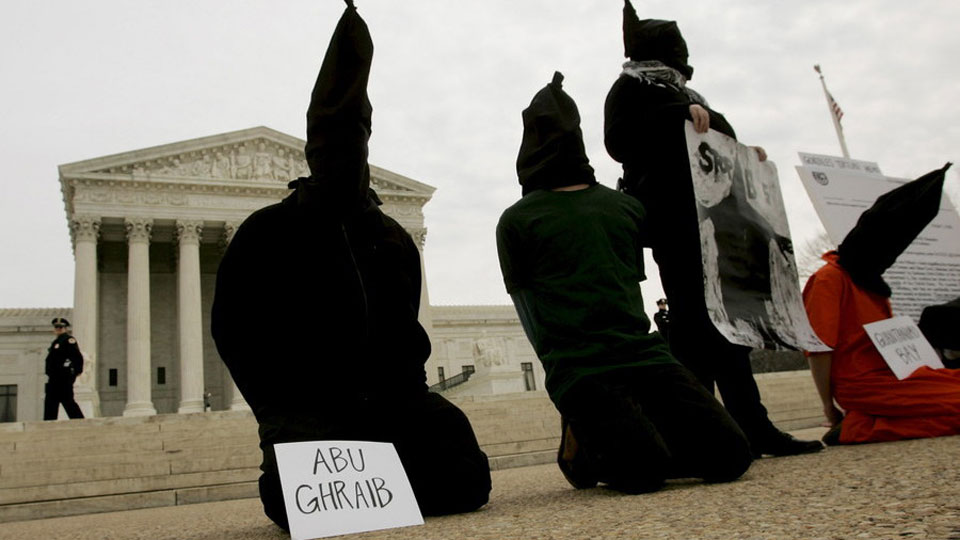 VIRGINIA, Nov 14:  CIA report obtained by the ACLU lays bare the details of the agency's "enhanced interrogation" program, including tactics so disturbing even CIA agents were reluctant to implement them.

The ACLU fought in court for two years to obtain the report, which constitutes a history of the CIA's "extraordinary rendition" detention program from 2002 to 2007. It was drawn up in response to the Abu Ghraib scandal to counteract the "distorted picture" taking shape in the media and, according to the agency's lawyers, does not represent a "final official history, or assessment, of the program."

Beginning with a description of US intelligence services post-9/11 – chaos, panic, disorder, the willingness to do anything to prevent another terrorist attack – the report quickly moves from the seemingly rational goal of "rounding up al-Qaeda operatives worldwide" into surreal excuse-making ("no one ever was medicated rectally" despite "an occasional charge" that this was common practice during the rendition process) – within a single page.

While the report attempts to downplay the torture of detainees – "water-board applications generally are limited to 20 seconds, and no more than 40 seconds" – it notes that agents watching the waterboarding of Abu Zubaydah, the first prisoner to undergo their "enhanced interrogation," were made "visually and psychologically very uncomfortable" and left "profoundly affected" by one "particularly aggressive session" to the extent they needed "staff counseling."

Apparently repulsed by the violence of Zubaydah's interrogation, CIA psychologists brainstormed alternatives and opted to go with that old spy movie standby, "truth serum." After poring over old Soviet drug experiments and the archives of the CIA's own MK-ULTRA program, in which LSD was administered to unwitting test subjects, they settled on Versed, a mild sedative whose memory-fogging side effects would seem to disqualify it for use as a truth serum (it's no use getting the spy to the point where he's ready to spill his secrets only to find he can't remember them).

The CIA allegedly chose not to go the truth serum route, as it would have required permission from the Justice Department. Medical experimentation on prisoners was expressly prohibited, as was the use of "mind-altering drugs" for interrogation. The agency's legal team had already convinced the Justice Department to OK waterboarding (arguing that "although the waterboard constitutes a threat of imminent death," it "did not cause the requisite prolonged mental harm" and therefore did not amount to torture under the Geneva convention) and they were hesitant to push their luck. 'Project Medication,' as it had come to be called, was shelved.

he report explicitly mentions agency doctors' "significant ethical concerns" as a stumbling block to the use of the truth serum, insisting that detainees were never medicated against their will – except twice, when they were sedated "to avoid self-harm or endangerment to others," and in the case of hunger-strikers, who were involuntarily tube-fed ("but always with their assistance," the report maintains!).

Doctors who have treated the victims of CIA "interrogation" took issue with some of the report's descriptions. Contrary to the agency's assertions that the program was "reassuringly free of enduring physical or psychological effects," Dr. Sondra Crosby states that survivors experience "severe, complex post-traumatic stress disorder, depression, physical ailments, and psychosocial dysfunction" and points out that at least one detainee was tortured to death under the program.

While the ACLU won the release of the report last September, the CIA's lawyers were able to block its release for over a year and continue to fight in court for further redactions, and it's easy to see why they don't want the document widely read. While the "enhanced interrogation" program was shuttered in 2007, the Trump administration has discussed bringing back waterboarding and "a hell of a lot worse," and CIA Director 'Bloody Gina' Haspel earned her nickname presiding over the torture of detainees at the same Thailand black site where Zubaydah was waterboarded 83 times.

Muslims most unpopular group in US: report

A report from sociologists at the University of Minnesota demonstrates the negative attitudes toward Islam are not only higher than... Read More...

MCC should be passed after revising some provisions: Thapa
18 hours ago

RGTS to remain operational on Saturday
12 minutes ago

Neighbor stabs a man to death
16 minutes ago