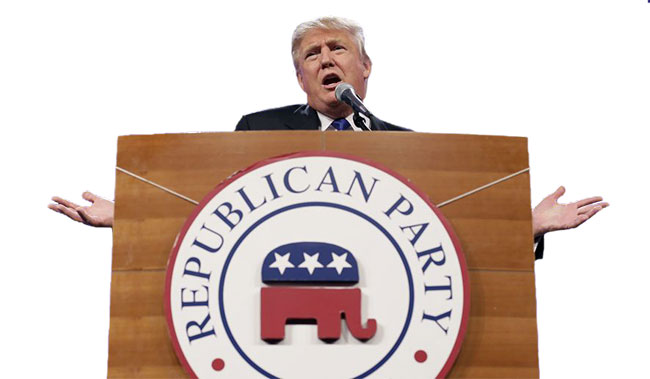 After nine months of Donald Trump’s presidency, the leaders of the Republican Party appear finally to be waking up to the harsh reality that their country stands at the edge of an abyss. They now have a choice: they can either continue to collaborate with Trump, thereby sustaining his destructive leadership and courting disaster, or they can renounce him, finally putting their country’s democracy ahead of loyalty to their party/tribe.

Recent statements by a Republican senator from Tennessee, Bob Corker, suggest that the tide is turning against Trump. Corker sniped that, “the White House has become an adult day care center,” before warning that Trump’s Twitter threats may put the US “on the path to World War III.” Similarly, Senator John McCain warned of the threat posed by a “half-baked, spurious nationalism.”
But true political honor demands more than veiled condemnations (McCain did not mention Trump by name in his speech), or simply quitting, as Corker and Senior Republican Congressman Pat Tiberi of Ohio are doing. Rather, it calls for crossing the political aisle, as Winston Churchill (no doubt a hero to all of them) did, when he switched from the Liberal to the Conservative Party.

As Churchill demonstrated, there is no shame in shifting political allegiances. There is, however, shame in loyalty to a disgraced or deplorable party or cause. And any Republicans today who think they can delay breaking definitively with Trump, without irreversibly damaging their own reputations, should recall the fate of others—in the Soviet Union in 1917, in Germany in 1932, and in Russia and Turkey today—who thought they could tame a monster.

Consider Nikolai Bukharin, a favorite of Vladimir Lenin and the editor of Pravda. For more than a decade after the Bolshevik Revolution, Bukharin tried to reconcile his academic understanding of “the dictatorship of proletariat” with its real-world implementation. This wasn’t so difficult while Lenin was in charge: despite the bloodshed the new regime engendered, mass murder wasn’t its main purpose or source of energy.

Bukharin executed
That changed with the arrival in power of Joseph Stalin, for whom terror was both a means and an end. Nonetheless, Bukharin aligned with Stalin to purge Leon Trotsky and other Bolsheviks who sought to adhere more closely to Lenin’s dictates (and his testament against Stalin). Bukharin reasoned that Stalin’s methods were enabling the Soviet Union’s rapid development into an industrial power, and the future of communism was far more important than the loss of a few thousand lives—or even a few million.

Bukharin would soon regret that reasoning. Once Trotsky was out of the way, Stalin turned on all the other senior Bolsheviks, calling them “enemies of the people”—a phrase that Trump’s populist supporters, like United Kingdom’s hardline Brexiteers, have revived to denounce anyone who dares challenge their “blood and soil” code. Bukharin was executed in 1938.

Franz von Papen also bet that he could tame a dictatorial demagogue. To advance his own political ends, Papen persuaded German President Paul von Hindenburg to appoint Adolf Hitler as Chancellor in 1933. A seasoned and autocratically inclined politician, Papen thought that, once Hitler was in power, he could control the Nazi leader, whom Papen regarded as a provincial blowhard.

Instead, on the Night of the Long Knives, the Nazis hunted and executed Papen’s trusted associates, Herbert von Bose and Erich Klausener, and seized control of the government. Papen’s fate was kinder than Bukharin’s, though: Hitler shipped him off to serve as ambassador to Austria and then to Turkey. After World War II, Papen was acquitted at the Nuremberg trials.
Boris Berezovsky, Boris Yeltsin’s trusted oligarch-henchman with his own murky reputation, similarly underestimated a would-be autocrat. It was Berezovsky who brought Vladimir Putin to Yeltsin’s attention, anticipating that the diminutive ex-KGB officer was the ideal candidate to protect the Yeltsin family’s riches—and Berezovsky’s own wealth—once Yeltsin retired. Yet soon after Putin was in power, Berezovsky lost his business empire and was forced to emigrate to England, where he ultimately died under suspicious circumstances.

Davutoğlu removed
Finally, in Turkey, President Recep Tayyip Erdoğan and his predecessor Abdullah Gül worked together to create the Justice and Development Party (AKP), which has dominated Turkish politics since 2002. But, as Erdoğan has concentrated power in his own hands, he has silenced Gül. Likewise, former Prime Minister and AKP leader Ahmet Davutoğlu long supported Erdoğan, until deepening disagreements—at times rooted in Erdoğan’s contempt for the very position of the prime minister—forced Davutoğlu to step down last year.

Of course, America’s democracy is stronger than that of Turkey or Russia. But with his shameless lies and relentless attacks on those who disagree with him—and his recent suggestion that it might be appropriate to “challenge” a major US news network’s broadcast license—Trump has shown that he is not interested in adhering to democratic norms.

A weakened democracy is an exceedingly high price for the US to pay—and for what? At first, Republicans wanted to use Trump to help them pass legislation such as a repeal of the 2010 Affordable Care Act (“Obamacare”) and tax reform. But, after ten months of controlling the presidency and both houses of Congress, Republicans have accomplished almost nothing legislatively. At this point, it seems that they simply want power for power’s sake—and that means beating, not cooperating with, the Democrats.

But that may be changing. Congressional Republicans have already joined with Democrats to enact “Trump-proof” sanctions against Russia, and lately there have been moves toward cooperation on maintaining the subsidies on which Obamacare depends (after Trump cut them by executive order).

These are steps in the right direction. But, with Trump’s behavior becoming increasingly capricious and dangerous, it is not nearly enough. Republicans who care about ending up on the right side of history cannot stay on Trump’s side any longer.

BEIJING, Nov 15: Pictures of a golden pheasant in China are going viral because some people think he bears a... Read More...