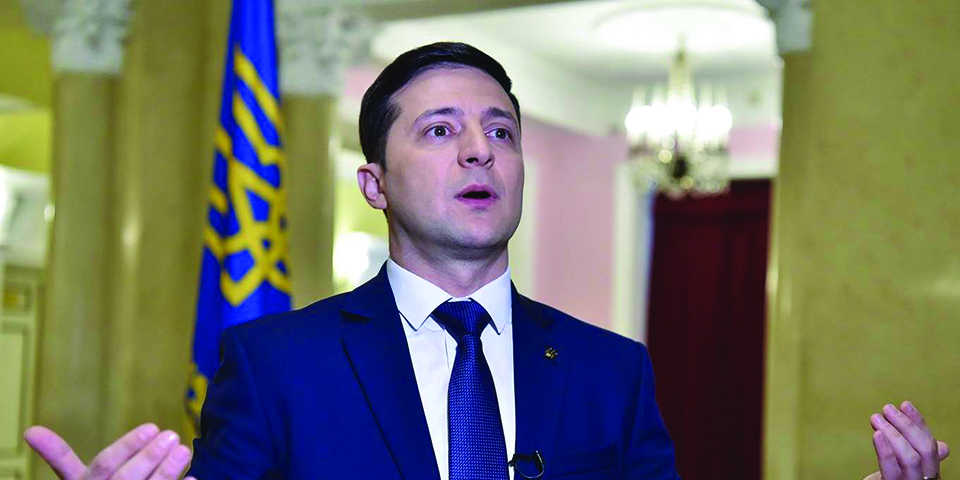 NEW YORK – If life imitates art, Nikolai Gogol, who had a keen grasp of the delusional and demented, could have scripted many of the key political events of recent years. Consider a story that begins with a woman announcing her presidential candidacy and quickly becoming—despite her flaws—the favorite to win. But out of nowhere appears another candidate: a television star with no qualifications for public office.

In short order, this buffoonish interloper goes for the jugular, heaping one big lie after another on his opponent, while spouting absurd promises about social policy and security matters. His proposals fall apart under the slightest scrutiny, but it doesn’t seem to matter. More citizens drift into his camp, attracted by his vow to “drain the swamp” and lock up his “crooked” opponent. The world is taken aback as he bamboozles his way to victory.

This black comedy describes the 2016 US presidential election, when Donald Trump came to power in one of the world’s most powerful countries and its oldest democracy. But while America might well recover from electing a louche carnival barker, Gogol’s birthplace, Ukraine, is another matter.

A country whose independence always seems to be hanging by a thread, Ukraine is reprising the same bizarre story that brought Trump to power in 2016. Recent opinion polls show a surge of public support for Volodymyr Zelensky, a comedian who once played a naive president on TV and is now running for that office in real life, despite not knowing anything about politics or public policy.

Unlike the United States, Ukraine has no margin for error in politics. It is mired in an undeclared war with Russia that has taken some 15,000 lives and turned over one million people into refugees in their own land. Having been invaded by its mighty neighbor and witnessed the illegal annexation of Crimea, Ukraine is in no position to have its all-powerful presidency placed in the hands of a political ingénue.

By pretending that he is capable of managing Ukraine’s many complexities, Zelensky, like Trump, betrays a contempt for the country he says he loves. He is certainly unfit to confront Ukraine’s warring oligarchs, who are eager to loot the state’s coffers under the absent supervision of a useful idiot.

One can only wonder why Zelensky has thrown his jester’s cap into the ring. Most likely, he recognizes that the other two leading candidates, current President Petro Poroshenko and two-time former Prime Minister Yuliya Timoshenko, each have a lot of political baggage. And so, like Trump, he has presented himself as a new broom that will sweep out all of the “corrupt politicians.”

Poroshenko, for his part, has presided over the past five years of unacknowledged warfare with Russia, while carrying out some important reforms (particularly to the gas-transmission system). But he has done little to improve the Ukrainian army’s readiness or prevent cronies and ministers from plundering its budget. Poroshenko himself has become much wealthier while serving as president, raising serious concerns about his fitness for another term.

As for Tymoshenko, her story, too complicated for satire, is more akin to something from Tolstoy than from Gogol. Though she was a divisive figure in the 1990s and during her premierships, she proved effective in negotiating with Russian President Vladimir Putin to end a gas dispute in 2009, sparing Kyiv—and much of Europe—from the shivering cold. For that, Victor Yanukovych, the Kremlin puppet who was then Ukraine’s president, put her on trial for “abuse of power” after his own election in 2010.

Tymoshenko challenged Yanukovych and his cronies to dig into her past. Her opponents spent millions of dollars searching for evidence of corruption, with help from the best American private investigators money could buy. Yet in the end, they found none from either of her two terms as prime minister.

One of Tymoshenko’s nemeses from this period was Paul Manafort, former chairman of Trump’s 2016 campaign, who is now facing a long prison term for crimes related to his work in Ukraine on behalf of Yanukovych. Manafort’s involvement in this story—it was he who funneled millions of dollars to smear Tymoshenko—should tell Ukrainian voters all they need to know. In a political system systematically distorted by oligarchic interests, Tymoshenko is probably the only candidate who would even try to deliver on the promise of stemming corruption.

Against this backdrop, Zelensky is posing as an outsider who is untainted by the country’s culture of swindling. In fact, he is a plant for Ihor Kolomoisky, one of Ukraine’s most unprincipled oligarchs (which really is saying something.). Kolomoisky just so happens to own the television station that made Zelensky a star, and he has used his private army to try to intimidate Poroshenko. Among other things, he seems to want to regain control of PrivatBank, now that Ukrainian taxpayers have had to foot the bill to clean up its debts. When asked about his ties to Kolomoisky, Zelensky simply feigns ignorance.

Navigating Ukrainian politics is nothing like walking over the country’s glorious black-earth steppe. Put your foot down in the wrong place and you will plummet into the abyss. That is why Ukraine cannot afford to take a Trump-size risk with someone like Zelensky.

But nor should Ukrainians have to put up with another five years of Poroshenko, whose primary focus is on feathering his own nest. That leaves Tymoshenko. Despite her faults, she is the only realistic choice for Ukrainians. And, having survived an unjust prison sentence, she has already proved her willingness to make hard choices on behalf of her country, despite the personal consequences.

Whereas a win for Tymoshenko would offer Ukraine its best chance in these tumultuous times, a victory for Zelensky would turn Marx’s famous dictum on its head: America’s farce would reappear as Ukraine’s tragedy.

Nina L Khrushcheva is Professor of International Affairs at The New School. Her latest book (with Jeffrey Tayler) is “In Putin’s Footsteps: Searching for the Soul of an Empire Across Russia’s Eleven Time Zones”

If exposing the Trump administration’s intrigues makes one an “enemy of the US” one hopes it is a badge Ukraine's... Read More...