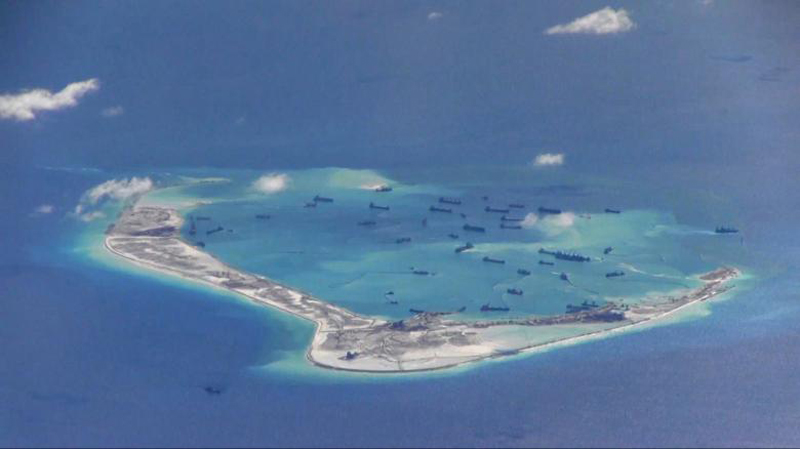 Chinese dredging vessels are purportedly seen in the waters around Mischief Reef in the disputed Spratly Islands in the South China Sea in this still image from video taken by a P-8A Poseidon surveillance aircraft provided by the United States Navy May 21, 2015. U.S. Navy/Handout via Reuters/File Photo

A Donald Trump presidency does not mean the United States will withdraw from the South China Sea, but rather will continue pursuing "regional hegemony", Chinese academics who drafted a report for an influential government think tank said on Friday.

Ensuring "absolute control" over the South China Sea was the crux of U.S. military strategy in the Asia-Pacific, according to what the authors said was China’s first ever public report on the U.S. military presence in the region, released on Friday in Beijing.

"There will be no overturning change to U.S. policy in the South China Sea," said Wu Shicun, head of the National Institute for South China Sea Studies, an influential Hainan-based think tank that wrote the report.

Trump rarely mentioned the South China Sea on the campaign trail, but concentrated on the economic relationship with Beijing, threatening to label China a currency manipulator and impose import tariffs on Chinese imports.

China claims most of the energy-rich waters through which about $5 trillion in ship-borne trade passes every year. Neighbors Brunei, Malaysia, the Philippines, Taiwan and Vietnam also have claims.

Recent U.S. efforts to counter what it sees as China limiting freedom of navigation in the South China Sea have drawn Beijing's ire and stoked fears of military conflict. A patrol by U.S. warships in October was dubbed "illegal" and "provocative" by the Chinese Defence Ministry.

There would be "more continuity than change" in Trump's military policy in the Asia-Pacific, said Zhu Feng, director of the South China Sea Center at Nanjing University, at the report launch.

Trump may not use the term "rebalancing" to the region, but he would likely retain most of policies, he added.

Both academics agreed that there was a high possibility of increased U.S. military spending in the Asia-Pacific under Trump.

A Trump administration would "not be an exception" to other Republican-led governments that increase military spending when they take office, said Zhu Feng.

The build-up of military might in the region has led to worries of a rising risk of accidental collisions that could spark conflict.

Zhu said that the decision to release a public report now was not China "preparing for war" but rather to avoid an "arms race" between China and the United States.