Trump turns to courts, as Biden inches closer to victory in U.S. election 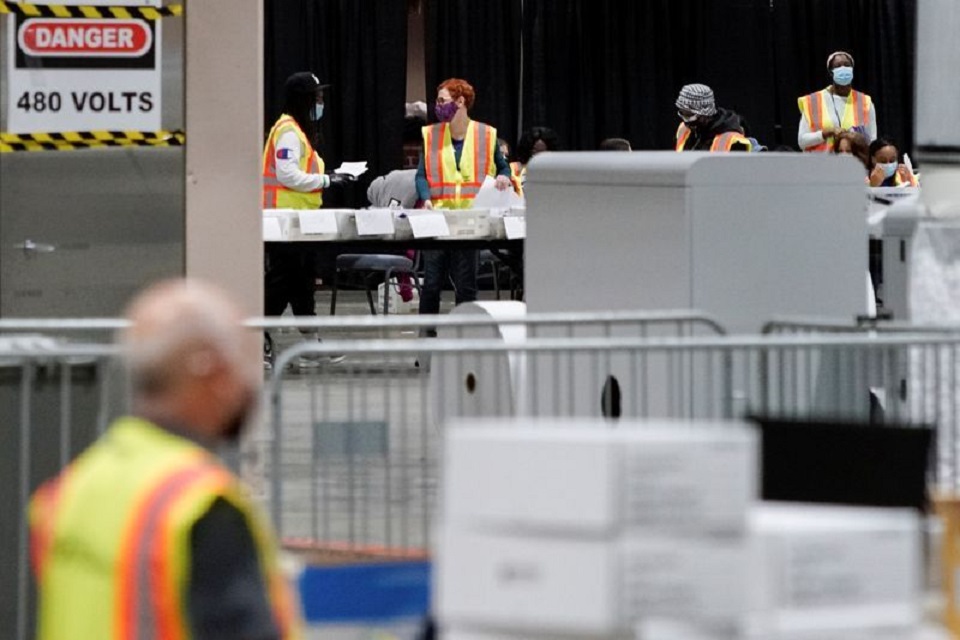 WILMINGTON, Del, Nov 7: With Democratic challenger Joe Biden taking a lead in Pennsylvania and Georgia and inching closer to victory in the U.S. presidential election on Friday, Republican President Donald Trump has turned to the courts to challenge votes in several states.

Below is a list of the cases that will play out in the coming days and possibly weeks:

Several court battles are pending in the battleground state of Pennsylvania.

The Trump campaign is also fighting Philadelphia election officials over vote counting in the city, and the campaign on Thursday was granted better access to the proceedings, which officials have appealed. A similar case filed in federal court was tossed.

On Wednesday, Trump’s campaign filed a motion to intervene in a case pending before the U.S. Supreme Court challenging a decision from the state’s highest court that allowed election officials to count mail-in ballots postmarked by Tuesday’s Election Day that are delivered through Friday.

U.S. Supreme Court justices have said there was not enough time to decide the merits of the case before Election Day but indicated they might revisit it afterwards.

Justice Samuel Alito, joined by fellow conservatives Clarence Thomas and Neil Gorsuch, said in a written opinion that there is a “strong likelihood” the Pennsylvania court’s decision violated the U.S. Constitution.

A voter, a member of the media and two candidate campaigns sued the secretary of state and other officials to prevent the use of a signature-verification system in populous Clark County and to provide public access to vote counting.

Thursday’s lawsuit came after Trump campaign officials said they planned to file a lawsuit in the state after alleging without evidence that thousands of improper votes were cast by dead people and by voters who were no longer residents of Clark County, which contains Las Vegas.

The case was dismissed on Thursday.

Trump’s campaign on Wednesday filed a lawsuit in Michigan to stop state officials from counting ballots until it has an election inspector at each absentee-voter counting board. The campaign also wanted to review ballots that were opened and counted before an inspector from its campaign was present.

The U.S. Postal Service said about 1,700 ballots had been identified in Pennsylvania at processing facilities during two sweeps Thursday and were being delivered to election officials, according to a court filing early Friday.

The Postal Service said 1,076 ballots, had been found at its Philadelphia Processing and Distribution Center. About 300 were found at the Pittsburgh processing center, 266 at a Lehigh Valley facility and others at other Pennsylvania processing centers.

U.S. District Judge Emmet Sullivan is overseeing a lawsuit by Vote Forward, the NAACP, and Latino community advocates who have been demanding the Postal Service deliver mail-in ballots in time to be counted in the election.

WASHINGTON, Nov 3: More than 95 million Americans had cast their votes in the 2020 presidential election by Monday, according... Read More...

Palpa DAO suspends all but essential services
42 minutes ago