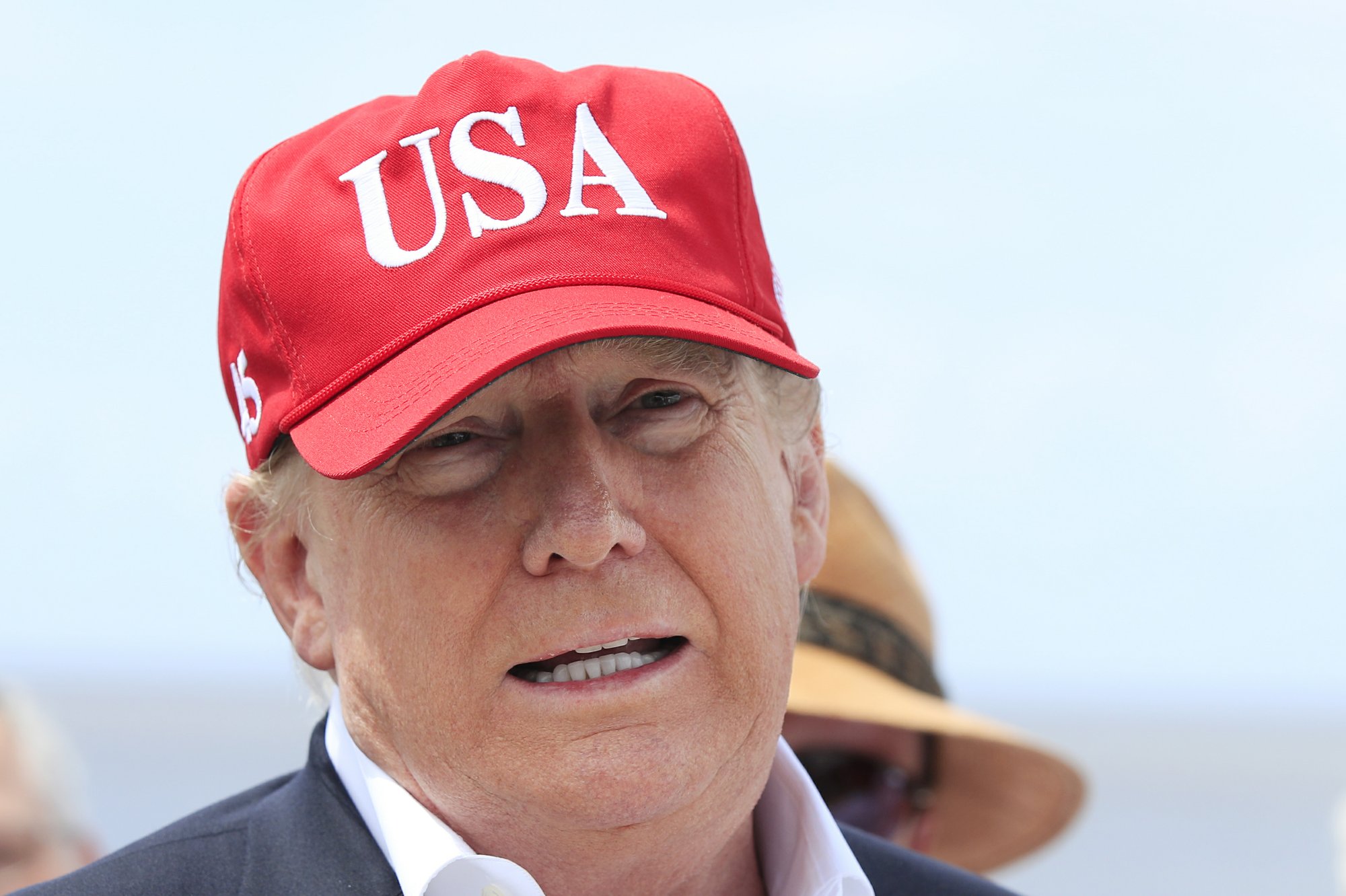 President Donald Trump speaks to reporters during a visit to Lake Okeechobee and Herbert Hoover Dike at Canal Point, Fla., Friday, March 29, 2019. Trump says he will close the nation's southern border, or large sections of it, next week if Mexico does not immediately stop illegal immigration. In a tweet, Trump ramped up his repeated threat to close the border by saying he will do it next week unless Mexico takes action. (AP Photo/Manuel Balce Ceneta)

PALM BEACH, March 30: Threatening drastic action against Mexico, President Donald Trump declared Friday he is likely to shut down America’s southern border next week unless Mexican authorities immediately halt all illegal immigration. Such a severe move could hit the economies of both countries, but the president emphasized, “I am not kidding around.”

“It could mean all trade” with Mexico, Trump said when questioned by reporters in Florida. “We will close it for a long time.”

Trump has been promising for more than two years to build a long, impenetrable wall along the border to stop illegal immigration, though Congress has been reluctant to provide the money he needs. In the meantime, he has repeatedly threatened to close the border, but this time, with a new surge of migrants heading north , he gave a definite timetable.

A substantial closure could have an especially heavy impact on cross-border communities from San Diego to South Texas, as well as supermarkets that sell Mexican produce, factories that rely on imported parts, and other businesses across the U.S.

The U.S. and Mexico trade about $1.7 billion in goods daily, according to the U.S. Chamber of Commerce, which said closing the border would be “an unmitigated economic debacle” that would threaten 5 million American jobs.

Trump tweeted Friday morning, “If Mexico doesn’t immediately stop ALL illegal immigration coming into the United States through our Southern Border, I will be CLOSING the Border, or large sections of the Border, next week.”

In Florida, he didn’t qualify his threat with “or large sections,” stating: “There is a very good likelihood I’ll be closing the border next week, and that is just fine with me.”

He said several times that it would be “so easy” for Mexican authorities to stop immigrants passing through their country and trying to enter the U.S. illegally, “but they just take our money and ‘talk.’”

Homeland Security Secretary Kirstjen Nielsen suggested Trump was referring to the ongoing surge of mostly Central American families heading north through Mexico. Many people who cross the border illegally ultimately request asylum under U.S. law, which does not require asylum seekers to enter at an official crossing.

Short of a widespread shutdown, Nielsen said the U.S. might close designated ports of entry to re-deploy staff to help process parents and children. Ports of entry are official crossing points that are used by residents and commercial vehicles.

“If we have to close ports to take care of all of the numbers who are coming, we will do that,” Nielsen said. “So it’s on the table, but what we’re doing is a very structured process based on operational needs.”

The White House did not immediately respond to questions about whether Trump’s possible action would apply to air travel.

“We want to have a good relationship with the government of the United States,” Lopez Obrador said Friday. He added: “We are going to continue helping so that the migratory flow, those who pass through our country, do so according to the law, in an orderly way.”

Marcelo Ebrard, Mexico’s foreign relations secretary, tweeted that his country “doesn’t act based on threats” and is “the best neighbor” the U.S. could have.

Customs and Border Protection commissioner Kevin McAleenan said Wednesday that 750 border inspectors would be reassigned to deal with the growing number of migrant families, and the DHS official said Friday that the department was seeking volunteers from other agencies to help.

In Florida, Trump was also asked about the two migrant children who died in U.S. custody in December. Is the administration equipped to handle sick children who are detained?

“I think that it has been very well stated that we have done a fantastic job,” he said, defending Border Patrol efforts to help the children.

Trump said that in one of the cases “the father gave the child no water for a long period of time,” although an autopsy released Friday made no mention of dehydration.

“It was a very tough situation and that trek up, that’s a long hard trek,” he said. “It’s a horrible situation. But Mexico could stop it.”

Democratic and Republican lawmakers have fought over Trump’s contention that there is a “crisis” at the border, particularly amid his push for a border wall, which he claims will solve immigration problems, though a wall wouldn’t keep out families who cross at official points so they can surrender and be detained.

The president called on Congress to immediately change what he said were weak U.S. immigration laws, which he blamed on Democrats. The Department of Homeland Security wants the authority to detain families for longer and more quickly deport children from Central America who arrive at the border on their own. The department argues those policy changes would stop families from trying to enter the U.S.

Alejandra Mier y Teran, executive director of the Otay Mesa Chamber of Commerce in San Diego, said the mere threat of border closures sends the wrong message to businesses in Mexico and may eventually scare companies into turning to Asia for their supply chains.

“I think the impact would be absolutely devastating on so many fronts,” said Mier y Teran, whose members rely on the Otay Mesa crossing to bring televisions, medical devices and a wide range of products to the U.S. “In terms of a long-term effect, it’s basically shooting yourself in your foot. It’s sending out a message to other countries that, ‘Don’t come because our borders may not work at any time.’ That is extremely scary and dangerous.”

WASHINGTON, Feb 15: President Donald Trump vowed on Thursday to declare a national emergency in an attempt to fund his... Read More...

China to provide additional 300,000 doses of COVID-19 vaccines to Nepal under grant assistance
21 hours ago

Ready to work with Oli-led faction if it accepts its mistakes: Madhav Nepal
10 hours ago