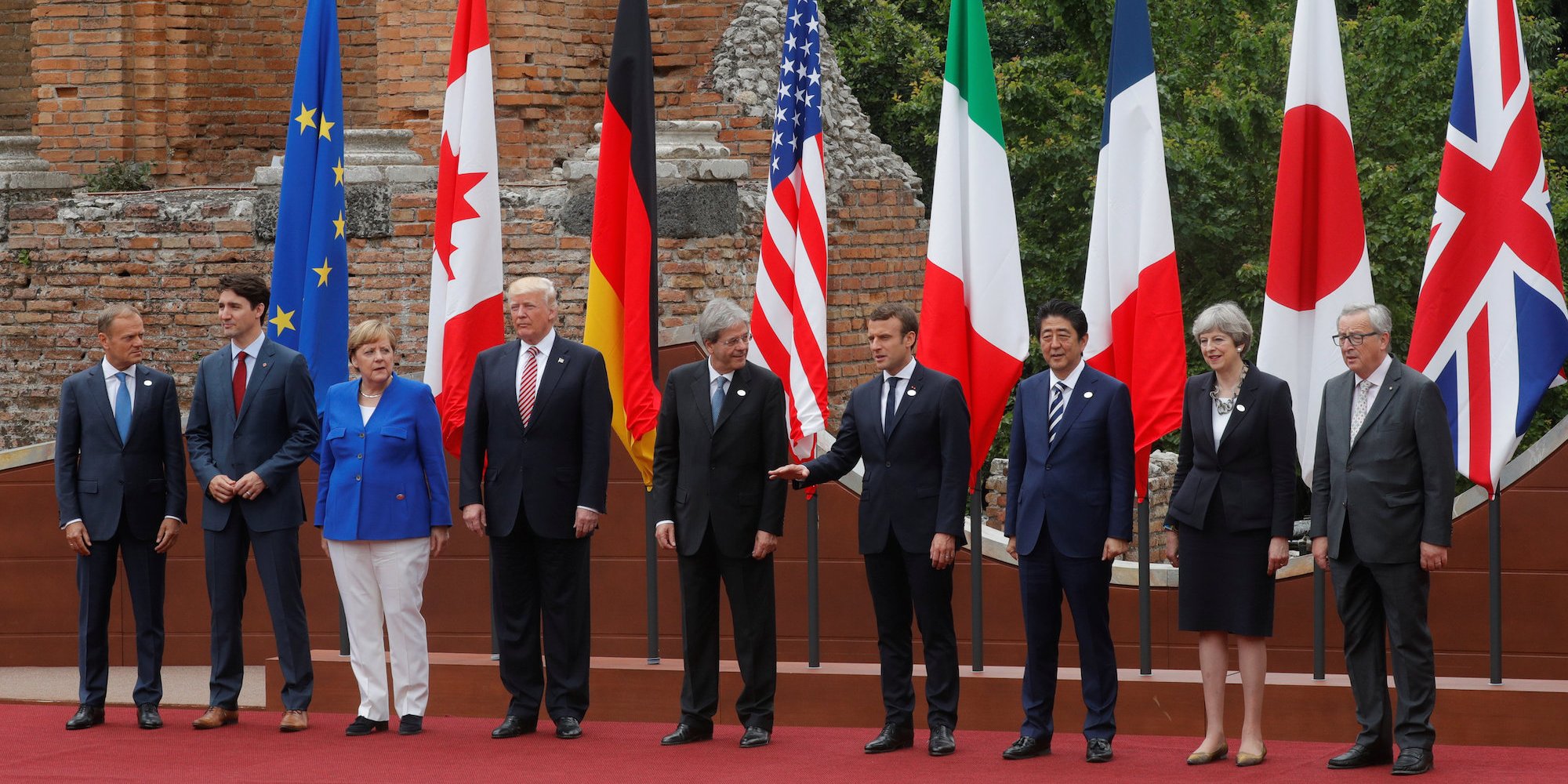 Leaders at the 2017 G7 summit in Sicily. Trump will likely have to meet all of them again, with the exception of Paolo Gentiloni, who is no longer Italian Prime Minister. Reuters/Philippe Wojazer

Donald Trump has threatened to escalate a global trade war on the EU and Canada, hours before he meets their leaders at the G7 summit in Quebec.

According to reports, Trump is reluctant to attend the meeting at all because of the frosty reception he will get, and would sooner focus on his upcoming summit with North Korea's Kim Jong Un.

The president tweeted on Thursday night:

"Why isn't the European Union and Canada informing the public that for years they have used massive Trade Tariffs and non-monetary Trade Barriers against the U.S.

"Take down your tariffs & barriers or we will more than match you!"

Hours earlier, he criticised the Canadian Prime Minister Justin Trudeau for "being so indignant" at the imposition of US tariffs, and railed against French President Emmanuel Macron for his alliance with Trudeau.

He added that he would use the meeting as an opportunity to start "straightening out unfair trade deals."

The tweets came as the EU and Canada announced retaliatory tariffs to match the levies on steel and aluminum which were imposed by the US last week.

Europe and Canada now appear ready to unite against Trump at the summit.

Trump heading to Quebec for the meeting with the leaders of the other so-called G7: Canada France, Germany, Italy, the UK, and Japan. The EU also attends as its own entity.

According to The Washington Post, Trump complained about having to go to the summit as he considered it an unwanted distraction from his upcoming summit with Kim Jong Un in Singapore and didn’t want to be confronted by other G7 leaders on trade.

Trump is now cutting his trip to Quebec short to go to Singapore for his meeting with Kim.

US allies stand united against Trump

European and Canadian leaders have appeared to band together, ready to stand against Trump at the G7 summit.

Trudeau met with the presidents of the European Council and Commission, Donald Tusk and Jean-Claude Juncker, on Thursday to discuss the EU-Canada trade relationship and discuss "how we can continue to work together to create economic growth that benefits everyone," in what could be seen as a jab at Trump.

Macron also threatened to leave Trump out of the G7 alliance. The bloc has isolated members in the past: It suspended Russia from the G8 alliance in 2014 in response to the annexation of Ukraine.

The French president tweeted on Thursday:

"The American President may not mind being isolated, but neither do we mind signing a 6 country agreement if need be.

"Because these 6 countries represent values, they represent an economic market which has the weight of history behind it and which is now a true international force."

He later wrote: "Tensions are growing everywhere. This G7 will be demanding."

The EU has announced that it would impose tariffs of about €2.8 billion ($3.3 billion/£2.5 billion) on US imports, which could include blue jeans, bourbon, peanut butter, cranberries, and rice. The bloc is finalizing its list, which will go into force from July onwards.

Cranberries and rice are mostly imported from key states that voted for Trump in the 2016 election.

Canada also announced retaliatory tariffs on $12.8 billion (£9.5 billion) worth of US goods, including steel and aluminum products, mayonnaise, and sleeping bags.

Industrial states in the US Midwest are will be hit hardest by the Canadian tariffs.

Mexico, whose exports were also targeted by the US last week, also announced that it would impose levies on different types of pork products. It also serves to make a political statement: 10 out of the top 15 states for pork exports to Mexico voted for Trump in the 2016 electio, according to the Census Bureau.

Xi vs Trump: Who has the better hand in potential trade war?