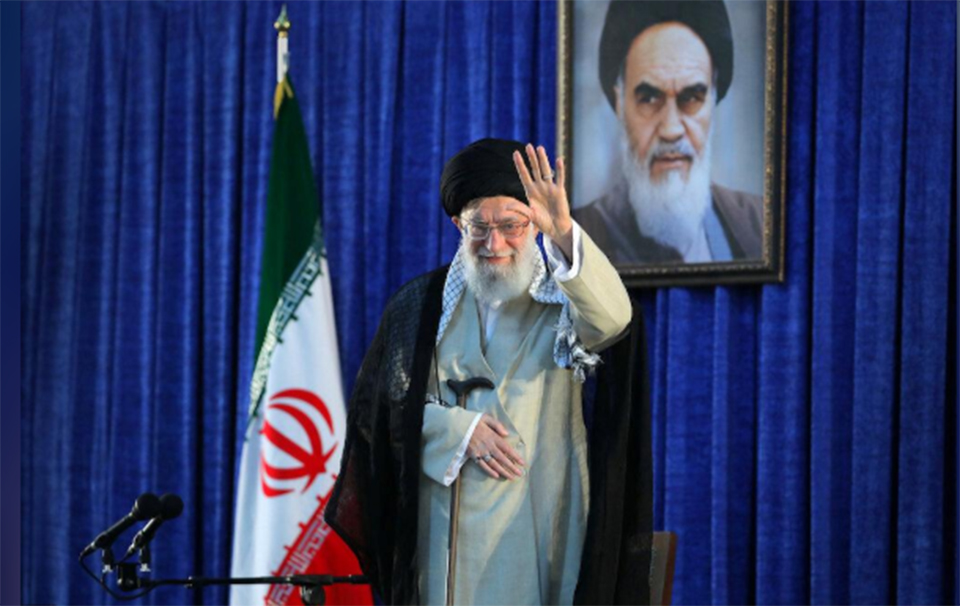 FILE PHOTO: Iran's Supreme Leader Ayatollah Ali Khamenei waves his hand as he arrives to deliver a speech during a ceremony marking the 30th death anniversary of the founder of the Islamic Republic Ayatollah Ruhollah Khomeini in Tehran, Iran June 4, 2019. Official Khamenei website/Handout via REUTERS

WASHINGTON/DUBAI, June 26: U.S. President Donald Trump threatened on Tuesday to obliterate parts of Iran if it attacked “anything American,” in a new war of words with Iran which condemned fresh U.S. sanctions on Tehran as “mentally retarded.”

But Trump later left the door open for talks, saying that Iran should speak to the United States “peaceably” to ease tensions and potentially lift U.S. economic sanctions.

Iran shot down a U.S. drone last week and Trump said he had called off a retaliatory air strike with minutes to spare, saying too many people would have been killed. It would have been the first time the United States had bombed the Islamic Republic in four decades of mutual hostility.

In rhetoric similar to the kind of harsh words he used to aim at North Korea, Trump tweeted: “Any attack by Iran on anything American will be met with great and overwhelming force. In some areas, overwhelming will mean obliteration.”

In a televised address on Tuesday, Iranian President Hassan Rouhani said the new sanctions against Khamenei would have no practical impact because the top cleric had no assets abroad.

Rouhani, a pragmatist who won two elections on promises to open Iran up to the world, said the White House’s actions were “mentally retarded” - an insult that other Iranian officials have used in the past about Trump, but a departure from Rouhani’s own comparatively measured tone over the years.

“Tehran’s strategic patience does not mean we have fear,” said Rouhani, who with his cabinet runs Iran’s day-to-day affairs while Khamenei, in power since 1989, is the country’s ultimate authority.

But Trump, speaking to reporters at the White House, said Iran would let the United States know what it wanted to do, including negotiate.

“Whatever they want to do, I’m ready,” Trump said.

“Their country is not doing well economically at all. That could be changed very quickly, very easily,” Trump said. “But they have to get rid of the hostility from the leadership. The leadership – I hope they stay, I hope they do a great job - but they should talk to us peaceably.”

Prohibitory orders in Valley extended by a week
5 hours ago

Prohibitory orders in Valley likely to be extended by a week, CDOs to take final call later today
9 hours ago

In scary scene at Euro 2020, Eriksen collapses on the field
13 hours ago

As Lumbini Province Assembly endorses govt’s policies and programs, CM claims to have support of 45 lawmakers
7 hours ago

Province 2 governor’s memorandum to chief minister: Cabinet is not inclusive
7 hours ago

One killed, three injured in road accident
12 hours ago

Rs 100,000 each given to families of five children drowned in pond
15 hours ago