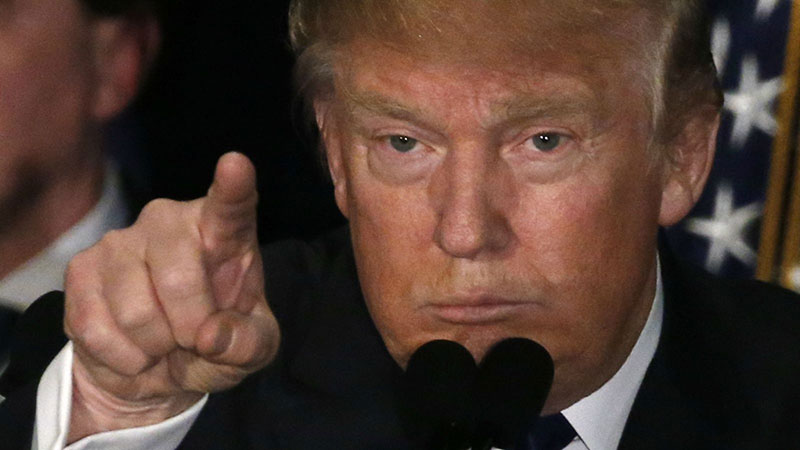 America has seen many things, but not a potential president discussing the size of his penis during a televised debate
If Donald Trump were to become President, the United States would have a problem with many dimensions. So would the world.

To begin with, the problem would be his unfathomable vulgarity. America has seen many things, but not a potential president discussing the size of his penis during a televised debate.

The problem would also be his pathological hatred of women. In a 1992 conversation with architect Philip Johnson, reported in New York magazine, he said, “You have to treat ’em like shit.” He still views them as disgusting creatures, with—as he said of Fox News journalist Megyn Kelly—“blood coming out of [their] wherever.”

The problem would also be his unabashed racism. This is a man who, according to his first wife, long kept a collection of Hitler’s speeches on his bedside table, and who blithely calls blacks “lazy,” derides Mexicans as “rapists,” and judges Muslims collectively guilty for Islamist terrorism.

The problem would be his anti-Semitism, too, lurking in table talk about not wanting his money counted by anyone other than “little short guys that wear yarmulkes,” or in tweets emphasizing the comedian Jon Stewart’s Jewishness, or in his angry remark last December to the Republican Jewish Coalition. “You’re not going to support me,” he said, “because I don’t want your money!”

The problem would be his gross lack of knowledge, not just of the world, but also of his own country. A few days before the referendum on Britain’s continued membership in the European Union, he didn’t know the meaning of the word “Brexit.” This month, he showed that he doesn’t know how many articles the US Constitution contains.

But, most seriously and worryingly, the problem would be that the leader of the world’s leading power would have a catalogue of simplistic ideas in the place of a geopolitical vision. And it is a catalogue that, despite Trump’s promise to “Make America Great Again,” would undermine US prosperity and security.

Consider his idea, floated in early March and probably inspired by his private bankruptcies, of renegotiating the US national debt. The idea was idiotic (the American government, which holds a monopoly on issuing the world’s leading reserve currency, has nothing to “renegotiate”). But had Trump been in power when he proposed it, the consequences would have been devastating: an immediate hike in interest rates; a tanking dollar; and a breach of confidence between the US (now seen as behaving like Argentina or Greece) and everyone else.

Or consider his statement, during his nomination acceptance speech in Cleveland, that, if elected, he would revise NATO’s policy of automatic support for threatened members of the Alliance. In the world according to Trump, Russia would then be able to follow through on its threat to reexamine the legality of the process that led to the Baltic states’ independence. It would be free to adjust its border with one neighbor or come to the rescue of a Russian-speaking minority “held hostage” by another. It could invade Poland or, of course, Ukraine. And why would Russia stop with NATO and its neighbors? It could pick a fight with Japan or any other Western allies in the Asia-Pacific region.

And then of course there is Russian President Vladimir Putin himself, whose praises Trump never misses an occasion to sing. As he once told CNN’s Larry King (while promoting his bestseller Think Big and Kick Ass), Putin is a great leader who did a “great job ... rebuilding Russia.” In September 2013, he described as a “masterpiece” a commentary signed by Putin in the New York Times that criticized US policy in Syria. In September 2015, after almost two years of a Cold War-like standoff over Ukraine, he told Fox News that Putin deserved an “A” for leadership.

The truth is that Trump’s personal ties with Russia are old and close. They date from the time in the early 2000s, when Trump, having been blacklisted by US banks, turned to Russian investors to finance projects in Toronto, SoHo, and Panama.

And reports are beginning to surface of a galaxy of influences and interests that formed around him at that time for his benefit: a firmament of Gazprom directors, former lobbyists for Ukrainian dictator Viktor Yanukovych (including Paul Manafort, now Trump’s campaign manager), and prominent organized-crime figures.

Some observers, like Franklin Foer, regard Trump as “Putin’s puppet.” Others, like George Stephanopoulos, a former adviser to President Bill Clinton, speculate about possible organic links between Trump’s campaign and the Russian regime.

And now the Russians appear to be behind the leak, two days before the Democratic National Convention in Philadelphia, of 19,252 email messages detailing how Democratic Party leaders favored Hillary Clinton over her rival, Bernie Sanders. Worse, Trump then suborned cyberespionage by a foreign power against his opponent: “Russia, if you’re listening,” he told a press conference, “I hope you’re able to find 30,000 emails that are missing.”

The implications of Trump’s election would be truly terrifying. The problem would not only be his vulgarity, sexism, racism, and defiant ignorance.

It would be his possible infidelity to America itself. The party of Eisenhower and Reagan has been commandeered by a corrupt demagogue who betrays not only his country’s ideals, but also its fundamental national interest.

Trump proposes mutual removal of all tariffs in trade with EU

WASHINGTON, July 25: US President Donald Trump has proposed a mutual cancellation of "all tariffs, barriers and subsidies" in trade with... Read More...