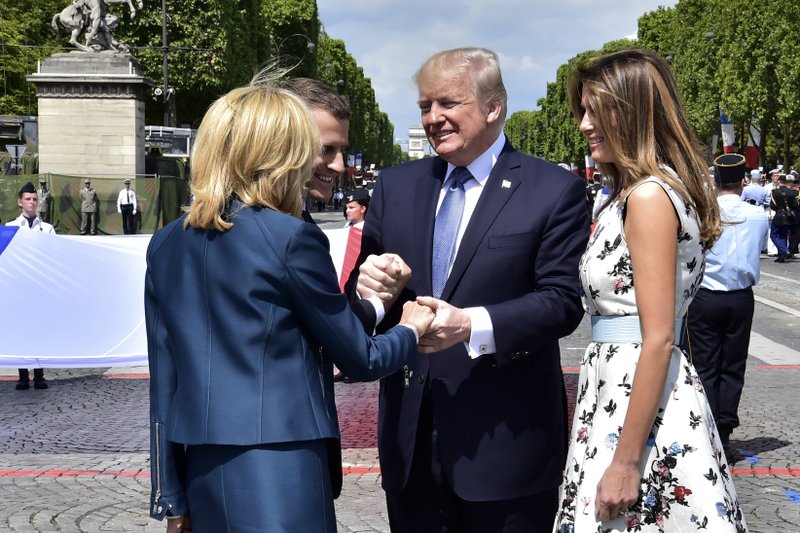 FILE - In this July 14, 2017, file photo, French President Emmanuel Macron, second left, shakes hands with U.S President Donald Trump while first lady Melania Trump and Brigitte Macron, left, walk on sides after the Bastille Day military parade on the Champs Elysees avenue in Paris. When he engages with world leaders, Trump rarely conducts business-as-usual diplomacy. Heading into his expected meeting with North Korean dictator Kim Jong Un, Trump’s record on the international stage suggests he’ll seek to charm the notorious dictator and look for an agreement that he can pitch as a win.. (Christophe Archambault, Pool via AP, file)

WASHINGTON, June 7: He hectored Mexico’s leader over border wall funding. Lobbed statistics at the Canadian leader without checking his facts. Cajoled the British prime minister to crack down on protesters. Had a tête-à-tête with Russia’s head of state on a whim. Bonded with France’s prime minister over military parades.

Heading into his expected summit with North Korean leader Kim Jong Un, Trump has a record on the international stage that suggests he’ll seek to charm the dictator and look for an agreement that he can pitch as a win — even if it’s more a triumph of appearance than policy. But never bet against the possibility that he’ll just walk away.

Trump’s unpredictable negotiating style has been on full display in the run-up to the historic June 12 summit in Singapore.

After months spent deriding Kim as “Little Rocket Man” and boasting about the size of his nuclear button, Trump has shifted tone in recent months, suggesting that a friendship was possible and agreeing to an unprecedented meeting.

Even when Trump temporarily backed out of the talks, he spoke of a “wonderful dialogue” building between the two leaders. And now that the talks are back on, Trump is shelving the “maximum pressure” phrase he coined to describe his sanctions against the North.

As he approaches the Kim talks, Trump’s avowed “America First” attitude has come increasingly to resemble “America alone.” His eagerness for a deal has unsettled Japan and South Korea. Elsewhere, talk of tearing up trade agreements and his imposition of tariffs to protect the American steel and aluminum industries have angered longtime partners.

An overriding theme of the president’s first 18 months of foreign policy has been his willingness to go it alone as he seeks to fulfill his nationalistic campaign promises — even if it unsettles allies.

“He just doesn’t care as much,” said Ian Bremmer, a foreign affairs columnist and president of the Eurasia Group. “In terms of postwar American history, no one has done more damage to American alliances than Trump has. All you have to do is talk to American allies.”

Critics have labeled Trump an inconsistent force, prone to publicly hectoring friendly partners, embracing foes and resistant to much advice or counsel. His loyal supporters see it all as a mark of Trump’s willingness to hold firm to his promised policies even when the conversations get awkward.

After nearly two years spent trying to understand the political novice, many world leaders are still struggling with how to engage Trump, though they have learned he is not easily moved from fulfilling the policies he promised to his most loyal voters during the campaign.

Foreign diplomats in the U.S. and leaders overseas have gone to great lengths to charm Trump, a rookie president schooled in New York negotiating who promised a major shift in foreign policy. Those efforts have included getting their messages on to Trump-friendly TV shows like “Fox and Friends” and rolling out the red carpet when Trump visits.

In France, Prime Minister Emmanuel Macron invited Trump to view a spectacular military parade on Bastille Day, one that inspired Trump to order up his own parade in Washington. In Japan, Prime Minister Shinzo Abe fêted Trump with golf and American-style hamburgers.

Macron tried unsuccessfully to keep Trump in the Paris climate accord and the Iran nuclear deal. Abe wanted Trump to stay in the Trans-Pacific Partnership trade deal and has encouraged a more skeptical approach to Kim’s overtures.

White House officials privately assess that the world leaders most solicitous toward Trump are rarely the most effective. Germany’s Angela Merkel and Britain’s Theresa May, for instance, have both largely refused to play into Trump’s love for pageantry and have been candid about their disagreements with the president.

Indeed, even those who were inclined to buddy up to Trump appear to be changing course. During an April summit at Trump’s Mar-a-Lago, Abe and Trump engaged in what U.S. officials described as a heated economic dialogue over Trump’s tariffs.

Just last week, Trump imposed new tariffs on the European Union, Canada and Mexico, despite furious lobbying from those countries. Canadian Prime Minister Justin Trudeau said: “These tariffs are an affront to the long-standing security partnership between Canada and the United States.”

Trump, meanwhile, has focused much of his attention on adversaries rather than allies, seeking to sit down with Kim and routinely praising Russian President Vladimir Putin.

Fixated on his celebrity and tough-guy image, Trump cares deeply about the pageantry of his interactions with world leaders and also values what he considers respectful treatment.

That tone was set on Trump’s first international trip, when Saudi Arabia gave him an opulent welcome. More than a dozen horses flanked the presidential limousine as Trump was slowly driven to the Royal Court in Riyadh. Trumpets played and soldiers stood at attention as the president arrived.

A key theme in Trump’s calls with foreign leaders has been his need for respect.

He badgered Mexico’s president over funding for his border wall, which he views as a face-saving fulfillment of a campaign promise. He nudged the British prime minister to do something about potential protests should he visit the U.K., a potential embarrassment for a diplomatic visit.

When it comes to policy meetings and delicate negotiations, Trump is more likely to follow his instincts than stick to a scripted plan. His admission of stretching his information about trade in a call with Trudeau was in keeping with a seat-of-the-pants style that can leave advisers nervous.

Advisers say Trump avoids spending extensive time in preparation. He grew frustrated with former national security adviser H.R. McMaster and his briefing style, though he is said to listen more to Secretary of State Mike Pompeo. Still, Trump is not a fan of detailed briefing books, preferring limited preparation and instinct.

Those close to Trump say he is approaching the Kim meeting the same way.