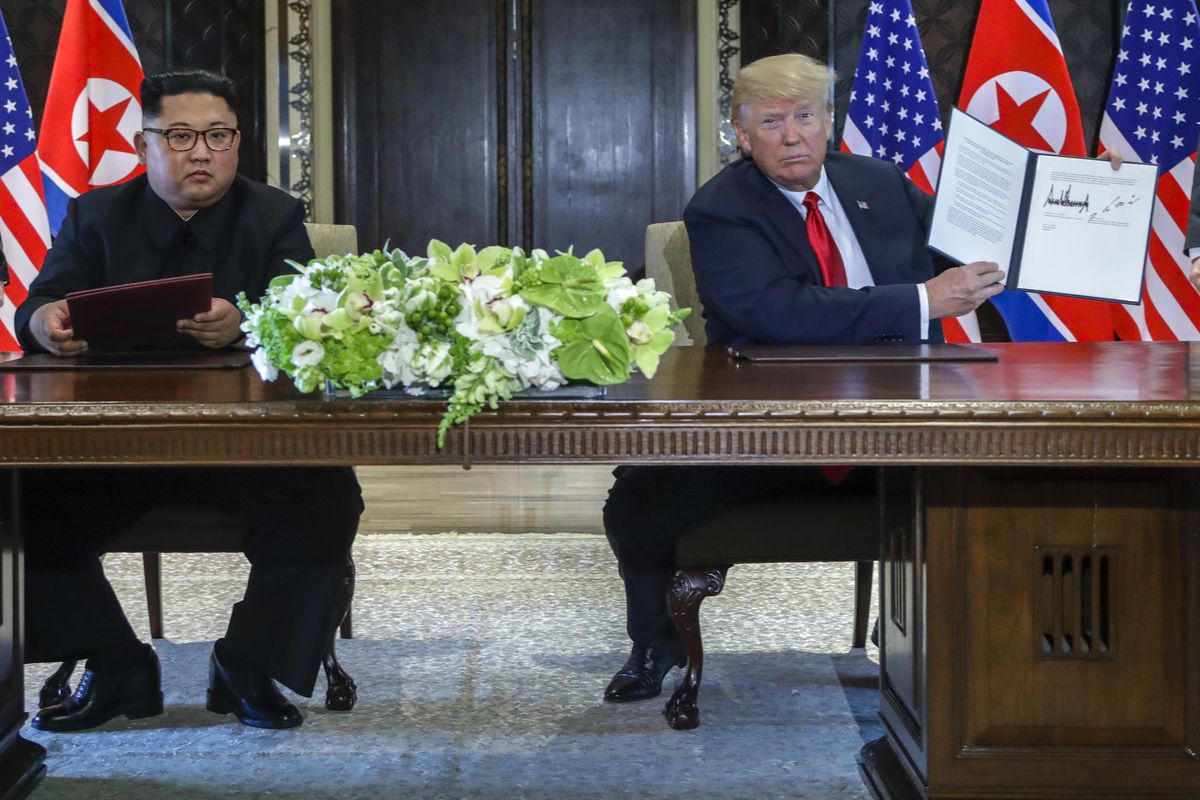 US President Donald Trump has renewed sanctions on North Korea, citing an "extraordinary threat" from its nuclear weapons - just 10 days after saying there was no risk from Pyongyang.

"There is no longer a Nuclear Threat from North Korea," he tweeted on 13 June, a day after meeting the country's leader Kim Jong-un in Singapore.

The move came as the US and South Korea cancelled two more training exercises.

The Pentagon said the goal was to support diplomatic negotiations.

It follows the decision earlier this week to suspend a major joint military exercise between the US and South Korea that had been planned for August.

President Trump promised to end the annual "war games" between the allies in an unexpected concession at his summit with Kim, calling them "provocative" and "expensive".

That came as a shock to many, as the US had previously argued that the drills were purely defensive and key to its military alliance with Seoul.

Has Trump changed his tone on North Korea?

It does sound that way, but the US has had a "national emergency" in place with regard to North Korea since 2008. Since then, presidents have routinely renewed that status - and the anti-Pyongyang sanctions that go with it.

President Trump extended the national emergency on Friday due to "the existence and risk of proliferation of weapons-usable fissile material on the Korean Peninsula and the actions and policies of the Government of North Korea".

These "continue to pose an unusual and extraordinary threat to the national security, foreign policy, and economy of the United States", he said in a notice to Congress.

Democrats say the latest White House language contradicts the president's earlier boasts about the success of the Singapore summit. In another tweet on 13 June, he said Americans could "sleep well tonight!".

"The report of President Trump's own administration completely undercuts his statements over the last few weeks," said the Senate's top Democrat, Chuck Schumer.

"We have to treat these negotiations far more seriously than just as a photo op," he added. "Saying the North Korea problem is solved doesn't make it so."

At the historic meeting in Singapore, the first between a sitting US president and a leader of North Korea, Trump and Kim signed a statement in which the US offered "security guarantees" to North Korea, and the North pledged to "work towards complete denuclearization of the Korean Peninsula" - without defining what that meant.

US Secretary of State Mike Pompeo has said that sanctions against North Korea will remain in place as negotiations continue over its nuclear arsenal.

However North Korean state media has reported that Trump agreed to "lift sanctions" as relations progress.

Why do the training exercises matter?

The Pentagon announced on Friday that US Defence Secretary Jim Mattis had "indefinitely suspended" some joint military exercises with South Korea, following the president's commitment at the Singapore summit.

The drills are held in South Korea with local forces and US soldiers stationed there.

North Korea has furiously objected to the exercises for many years, branding them provocative and a rehearsal for invasion. China too has said they do not serve the cause of peace on the Korean Peninsula.

It is not yet clear if major US drills slated for spring 2019 will also be suspended.

The decision to end the military exercises has been widely criticised as a major concession to North Korea, while the joint declaration Trump and Kim signed at the end of the Singapore summit has been criticised as lacking in detail and concrete commitments from the North.

After meeting Kim in Singapore, Trump told reporters: "Under the circumstances, that we're negotiating... I think it's inappropriate to be having war games."

Republican Senator John McCain has criticised the president's stance on the exercises, calling the suspensions a mistake.

"We must not impose upon ourselves the burden of providing so-called 'good faith' concessions as the price for continued dialogue," he said after the Singapore summit.

This is not the first time that the US and South Korea have delayed joint exercises.

Earlier in 2018, for example, they agreed to postpone drills during the Pyeongchang Winter Olympics in South Korea, amid a thaw in inter-Korean relations.